Yeah, and some days you’re the bug. Yesterday it was our turn to be the bug. It happens to all of us once in a while.

We were up bright and early, because we were moving from Three Flags in Wildwood to the Orlando Thousand Trails preserve, about 50 miles away and we wanted to get there early enough to snag one of the 50 amp RV sites, if possible. We pulled out of our site with no problem, I stopped in front of J.C. and Bev Webber’s motorhome to say goodbye, then drove to the front of the campground where we stopped to hook the Explorer to our Blue Ox tow bar.

Everything was working fine thus far. With the SUV hooked up, we did a light check and were ready to go. Or so I thought. I pushed in the knob to release our parking brake, put the transmission in gear…. and nothing happened. I could feel the transmission shift, it felt like the coach wanted to move, but it wouldn’t. The air brakes were stuck. Now what?

I reset the parking brake, then tried again, nothing. I shut the engine off, waited a minute and restarted it. Still nothing. Okay, that’s about the extent of my technical expertise. I called my buddy Ron Speidel in Mission, Texas and described the problem. Ron confirmed my suspicion that an air valve or air chamber had failed. Next I called Greg White, and he seemed to be on the same page. Since Greg didn’t seem real eager to rush over from Kemah, Texas to help me out, I called CoachNet, our roadside service company.

In less than an hour they had dispatched Lonnie, from Red Lightning Repair Service, and within another hour he had replaced the bad air chamber and we were good to go, and only $300 lighter.

We had an easy run east on State Route 44 to U.S. Highway 27 in Leesburg, then took 27 south to the Thousand Trails. We got the last 50 amp site available, though there are lots of 30 amp sites to choose from.

While we were getting parked, Rich Coppens drove by and saw us and said hello, then left us to get hooked up and settled in. It’s bad etiquette to interrupt an RVer when hooking up in a campsite, or even worse, when preparing to hit the road. It’s too easy to get distracted and forget something. Nice to wave at you Rich, we’ll catch you later.

Our site is pretty sloped, so it took some effort and several of the wooden blocks we carry for places liked this to get level. Well, almost level anyway. We have a very strong 4G signal on my Droid and our MiFi, but it’s still slower than an old phone line hookup and we get knocked offline every so often. Isn’t technology a wonderful thing?

We were famished, so we went off in search of food, and ended up at I Love NY Pizza, a mile or so south of the campground. It was absolutely one of the best pizzas we have had anywhere. With garlic knots, a large pizza, Terry’s Caprese salad, and our drinks, the bill came to just $22 before tip. We will definitely go back. 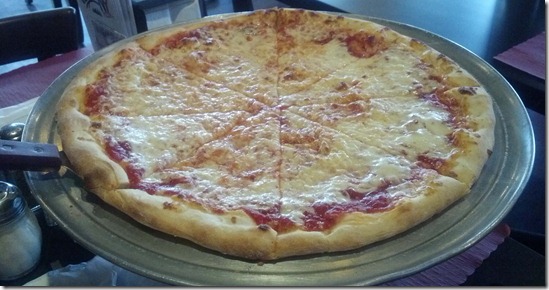 On our way back to the campground we stopped for gas, and I heard a lady calling, “Welcome to the neighborhood, Nick.” It was longtime subscribers Jim and Linda Sullivan, who are also staying at the Thousand Trails.

Back at the campground, we stopped to drop off a bundle of sample issues of the paper at the Family Center, then were greeted by these two guys. There are a number of Sandhill cranes living here, and it’s always neat to see them. There are also a lot of gopher tortoises, but we’ve only seen one so far this visit. 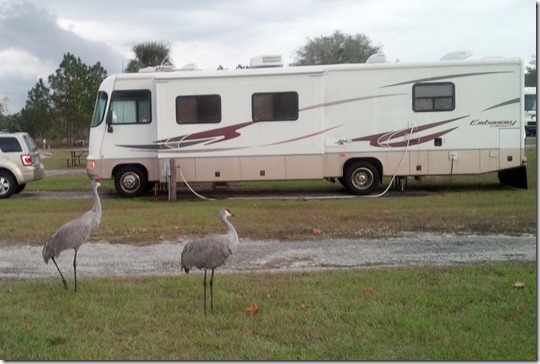 Soon after we got home, Dave and Jean Damon came by for a visit. We had not seen them since our rally in Celina, Ohio the end of August. It was nice to see them, and while we’re here maybe I’ll treat myself to one of Jean’s wonderfully relaxing massages.

Before I close, I wanted to let you know that my friend Russell Blake’s thriller The Voynich Cypher is free today on Kindle. Russell is a very successful independent author and has developed quite a following. Check it out.

Thought For The Day – It’s not MY fault that I never learned to accept responsibility!

7 Responses to “Some Days You’re The Windshield”