Nick's Blog » Are We Still Here?

I almost didn’t write a blog for today. I figured if the world was ending, what’s the point? And did I really want to spend part of the last hours left to this world sitting at the computer?

But since I didn’t want to miss a day, just in case, and because if the world doesn’t end, I need the revenue from the Google Adsense ads here on the blog to offset the expense of last night’s big going away dinner, I went ahead and wrote. I guess if you’re reading this, we’re all still here and those darned Mayans were wrong after all. I wonder if I can get back that nasty goodbye e-mail I sent to my mother-in-law?

So how did we spend what could have been our last day on earth? Pretty much like we spend a lot of our days. I did some writing, Terry did some online research on weaving, she filled a couple of orders, and we had the above-mentioned dinner at Green Garden Chinese Restaurant in Clermont.

But all that was later in the day. We started our day about 7 AM when three guys decided to have a very loud conversation outside, solving all of the problems of the world except for the one about why the hell do you have to be so rude?

Finally I went outside and gave them the evil eye, and mentioned that it sure was a foggy morning and anybody with any sense was still in bed, where I wished I was but it was too noisy for that. But if you can’t fix stupid, you darned sure can’t talk to it either. We’ll never take a corner site again, everybody and his brother seems to meet up right outside our bedroom window to chat.

As I said, it was a very foggy morning, though by 8 AM most of it had burned off. We had a pretty day, with the high around 78, but it was the last one we’ll have for a while. A cold front is coming through and we’re supposed to have highs in the 60s the next few days, with lows in the 30s the next couple of nights. It’s part of the cold front that’s been moving across the country. 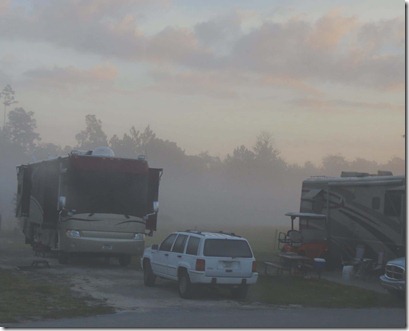 In mid-afternoon, blog reader Margie Rodgers, a solo lady fulltimer and avid geocacher, came by to visit for a while. Margie was at our rally in Celina a few months ago, but we were too busy then to really get to know her. It was nice to have some one-on-one time with her.

About 5:30 we drove into Clermont for what could have been our own Last Supper, if the Mayans had been right. The wind picked up while were in the restaurant, and driving back home, Terry could feel it when it hit the Explorer broadside a time or two.

The wind increased all evening, and about 10 PM the rain started and pretty soon it was really coming down. Batten down the hatches, baby, maybe those damn Mayans were right after all!

Thought For The Day – Ignorance can be educated and crazy can be medicated, but there’s no cure for stupid.

2 Responses to “Are We Still Here?”