Nick's Blog » That Was A Short One!

St. Augustine is a really cool town. The only real downside is that everything we wanted to tour to write stories about required admission charges of up to $10 per person. If you’re a tourist that’s okay, but when you do this for a living and may go to two or three attractions every day, it really adds up in a hurry. Usually, before we visit an area I contact the different places we want to do stories on and arrange to get media passes so we can come in and do our thing. Most places recognize that this is a great deal for them because we are giving them a lot of free publicity. But not one of the places we contacted in St. Augustine even bothered to reply. So while we’ll have a lot to write about in a future issue of the Gypsy Journal, there’s even more that we were not able to get to. Hopefully we can go back again someday and get more cooperation.

So we decided that since we had to leave the RV park we were in anyway yesterday, we would just go ahead and come on down to Titusville.

We left St. Augustine and drove 88 miles to Seasons in the Sun RV Resort, just outside of Titusville. That was one of our shortest driving days in a very long time! This is a very nice campground with full hookup RV sites and lots of amenities. And it’s a Passport America affiliate too, so the price was right! We came by to drop off a bundle of sample issues of the Gypsy Journal last year when we were in this area and really liked the place, so we were looking forward to staying here for a few days.

Titusville is one of our favorite small towns in the United States and Terry and I feel a deep affinity for the community. We have no intention of hanging up the keys anytime soon, but we know that it happens to every fulltime RVer sooner or later. We are not looking forward to that day, but we both agree that when the time comes we could live here in Titusville very happily. The community has everything we like; friendly people, good stores and restaurants, close proximity to bigger cities like Orlando if we need the services they have to offer, and access to a lot of water for fishing and kayaking.

Yes, they have hurricanes in Florida, but I don’t think Titusville has ever taken a direct hit. And everyplace has something, be it earthquakes, tornadoes, severe winter or summer weather, etc. We don’t live our lives in fear of what might happen someday.

Once we were parked and hooked up, we drove into town to see if anything had changed much since we were here last year. Titusville is home to Cape Canaveral and with the end of the Space Shuttle project, the local economy has taken a hit but the people we have talked to in the stores and restaurants all seem optimistic and say things are happening that makes them think the picture will improve soon. As the owner of a used bookstore told us yesterday, “Yes, it’s not as good as it used to be, but it’s okay. If this is the new normal, we can deal with it and keep on keeping on.”

Watersports are very big here. You can see any kind of boat you want, sail or power, in any size, from small rowboats to huge yachts in the local marinas. 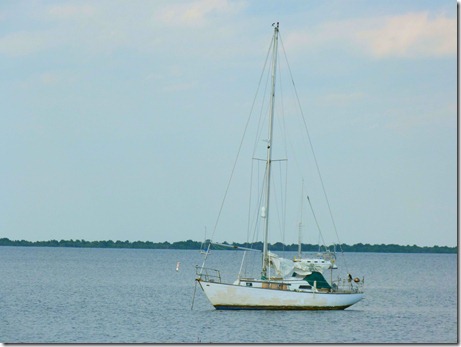 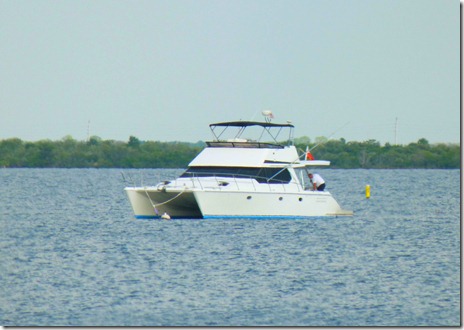 This bridge crosses the Indian River to the Canaveral National Seashore and the Merritt Island National Wildlife Refuge, which are located on a barrier island between the mainland and the Atlantic Ocean.

We drove out on the causeway that parallels the bridge and spent some time watching these guys windsurfing. Those things really fly across the water! 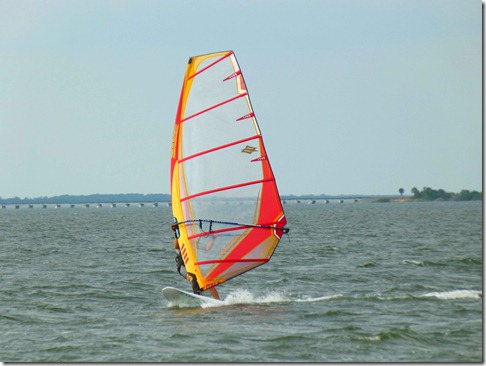 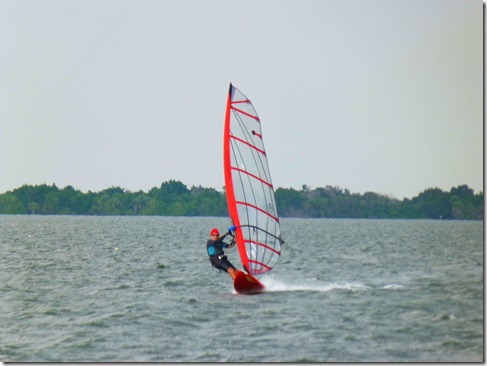 Eventually hunger caught up with us, and we went to Dixie Crossroads for dinner. I can’t tell you how many people recommended this very nice seafood restaurant to us the first time we came to Titusville several years ago, and every one of them was right. The food and service are always first rate and anytime we visit Titusville we make a point of going there for dinner. I had the Royal Red shrimp, which in my opinion taste much better than lobster. Terry had Southern shrimp with cheese grits and said it was outstanding.

We are going to be here for four nights and then head for Big Pine Key. Our original reservation at Sunshine Key RV Resort was for two weeks, starting on Wednesday, the 7th. But then I realized that would have us leaving on the 21st, the same day we are scheduled to arrive at Three Flags Mid-Atlantic RV Resort in Wildwood, Florida. That’s a 400 mile trip, and more than we want to make in one day. Especially since the Overseas Highway is a fairly slow two-lane road from the Keys to Miami. So I called and backed our reservation up by one day, arriving instead on the 6th and leaving on the 20th. Yeah, I’m getting the hang of this more relaxed lifestyle!

Thought For The Day – Are you one of those paranoid people who always checks behind the shower curtain for knife wielding psychopaths? If you are, and you do find one, what’s your plan?

8 Responses to “That Was A Short One!”