I hope you all have a wonderful and happy Thanksgiving. I know it’s traditional to say what we are thankful for, but if I tried to list them all I’d have to write a full-length book. Let me just say that in 60 years of bouncing around this planet, I’ve had my share of joys and heartaches, just like everybody else. But I have never been happier or more content with my life than I am right now. I sure don’t want it to end anytime soon, but if I died tonight, I’d go out knowing just how good life can be.

We left Pioneer Village in North Fort Myers about 10:30 yesterday morning and got onto Interstate 75 headed north, and immediately began looking for a truck stop. I’m not sure what happened, but by my calculations I had enough fuel on board to get up to Wildwood, 180 miles away. There are two truck stops a couple of miles from the campground and I planned to fill up at one of them before going into the RV park, because we will be sitting still for three weeks until we go about 45 miles to the Orlando Thousand Trails preserve, where we’ll be for another three week stay. It can get pretty chilly in central Florida in the wintertime, and I like to have a full tank to avoid condensation or algae buildup.

I’m not sure if it was because we had bucked a headwind coming out of the Keys Tuesday or if there was a malfunction in our Winnebago’s fuel gauge, but it showed we were hovering around ¼ tank. I usually depend on my Silverleaf engine monitor to keep track of fuel, because it’s more accurate than my dashboard gauges, but the laptop I run it on crashed the day we left Titusville so all I had was the fuel gauge to go on.

Somewhere north of Port Charlotte the needle hit E, my low fuel warning light came on, and I started to get nervous. I saw a sign announcing a BP with diesel fuel at an upcoming exit, and it had an RV logo on it, meaning it would (should) have room for us to get in and out of. So we got off the highway, only to discover that the BP was ten miles east! What the…? I had to find a shopping center big enough to turn around in, we got back on the interstate, and kept our fingers, toes, and eyes crossed until we made it another eight miles to a Pilot, where we took on 83 gallons. That meant we still had seventeen gallons of diesel left. Enough that we weren’t going to run out right that minute, but still way too close for my comfort level. I’ve crunched the numbers twice, and I still show I should have arrived in Wildwood with just under ¼ tank. We don’t have any obvious fuel leaks, and both of our fuel doors lock, so nobody siphoned any off. It’s a mystery to me.

Twice during our trip we ran into traffic jams. One was caused by a pickup truck that had burned in the right hand lane, forcing everybody to get into the left lane. There was an eighteen wheeler in front of us blocking our view, and by the time it changed lanes we were stuck in place for a couple of minutes until the driver of a car took pity on us and held back traffic to let us get over. While the truck was a total loss, the driver and his dog were standing on the shoulder, safe and sound. 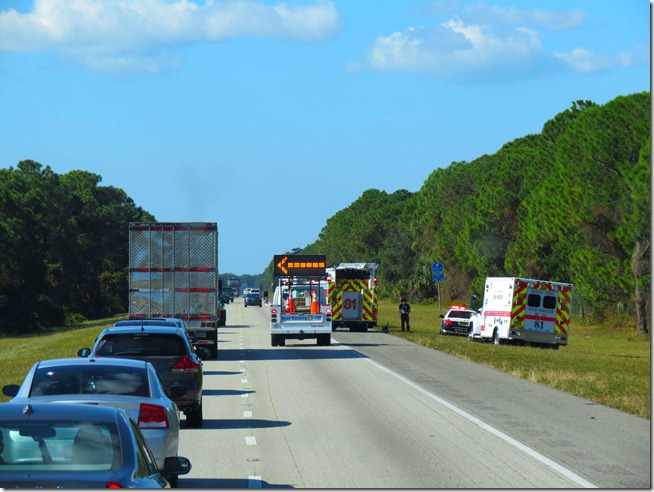 Not more then ten miles up the road, all of the activity was on the left shoulder, where emergency vehicles responded to a car broken down that looked like it had lost all of its fluids at once, judging by the pool under it. Hmmm… I wonder if my missing diesel was mixed in there too? 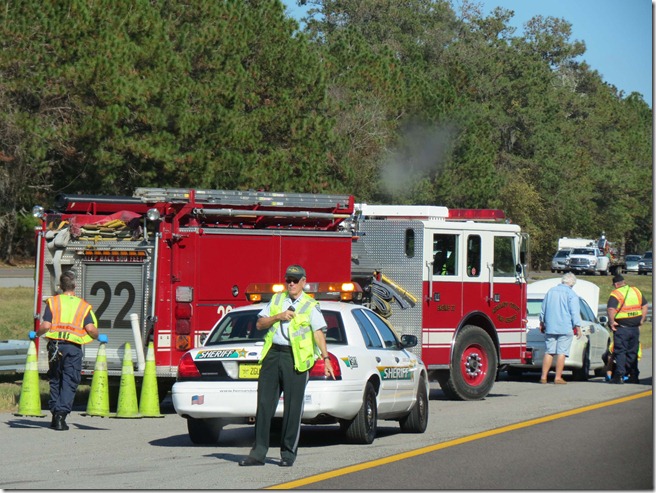 We arrived at Three Flags RV Resort a little after 2 PM, and I have to compliment manager Joanne Caplice. She runs a nice campground and is very friendly and helpful, as are the staff we have met so far. Joanne also runs PA Dutch Country up in Mannheim, Pennsylvania during the summer, and when we stopped there a few weeks ago we were impressed with that campground and also the employees we met. That attitude comes from the top down. Good job, Joanne!

Leaving our motorhome at the office, we drove the Explorer around looking for a good RV site, and had several to choose from. While we were doing that, Bill and Kathy Lemon spotted us and came out to say hello.

We found a nice pull through site and had no problem getting our Winegard Trav’ler rooftop satellite dish to lock onto a signal. Since we have already used our allocated 50 free nights for the year (our membership year starts and ends in April) that our Thousand Trails annual dues get us, our cost was $5 a night. Not too bad for a 50 amp full hookup site, anytime, anywhere, let alone in Florida in the winter. We have a total of twelve weeks booked back to back here and at the Orlando preserve before we head west in mid-February, all at $5 a night. Yes, even with the hassles we had to get straightened out last week, if you use your Thousand Trails membership it can be a very good investment. 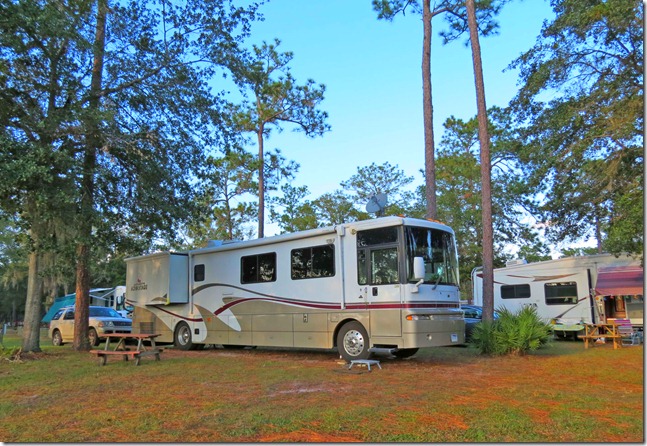 We have no real plans for our stay here. I need to get the new issue of the Gypsy Journal ready to go to the printer, Miss Terry wants to work on her loom, and we will probably get out and do some exploring if cabin fever sets in and we find ourselves needing a day out now and then.

Thought For The Day – I may not have everything I want in life, but I’ve been blessed to have all that I need.