I hope you all had a nice Thanksgiving, surrounded by lots of food, family, friends, and love. And I hope you took some time to remember all of the things each of us has to be thankful for. We may not like the way the economy is going, or how the elections turned out, or the yappy little dog in the RV next door; but all in all, life is pretty good, don’t you think?

I am most thankful for that fact that 12 years ago today Terry had just finished her long, hard regime of chemo and radiation and the doctors in Traverse City released her to travel. Just over two months earlier they had told us that her cancer had advanced too far before it was found, and to start planning for her funeral. Today she is healthy and cancer free. Yes, life is good.

We are staying at Three Flags RV Resort, a couple of miles west of Wildwood, Florida. Wildwood is a small town, and if folks around here want a better choice of stores or restaurants, they drive another five miles or so to The Villages. For those of you who are not familiar with this huge upscale master planned retirement community, The Villages is home to thousands of affluent retirees who enjoy amenities that include golf courses, fitness centers, theaters, lakes, and all kinds of shops and stores selling anything and everything. A lot of people, including a lovely lady we met in a bookstore in The Villages, will tell you that the only thing many of them lack is a smile. I guess money can’t always buy happiness.

You know you’re in a retirement community when you go to the store or restaurant and the golf carts outnumber the cars. 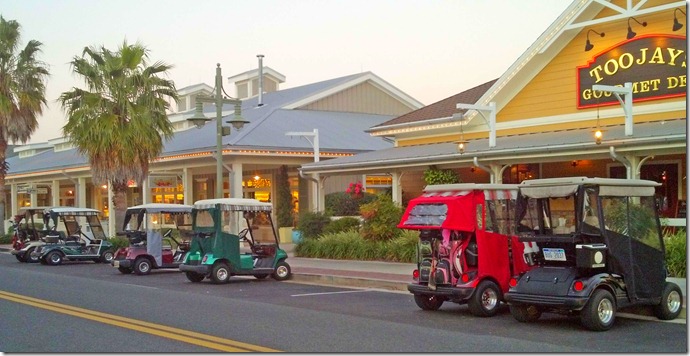 The other day when we were driving up Interstate 75, we saw this exit sign for Toledo Blade Boulevard. I wasn’t sure if the sign referred to a street named after the famous swords made in Toledo, Spain, or to the Ohio newspaper by the same name. As it turns out, a little internet research revealed it was the newspaper. So why is a street in Florida named after an Ohio newspaper?

Back in 1954, a development company was subdividing land in Sarasota County and building tract homes, advertising them in northern newspapers including the Toledo Blade. Lots in Port Charlotte and North Port sold for $10 down and $10 per month, with four different model homes offered, starting at $6,090. One of the officers of the development company got his start with the Blade, and the newspaper’s readers had responded favorably to the advertising campaign, so they named a street after the publication.

I have some connection to the Blade. I went to high school in Toledo, and had a paper route delivering the newspaper for a couple of years. And when I got out of the Army, I applied for a job as a reporter. Sure, I was a wet behind the ears kid, but even back then I wanted to write, and I wanted to write for the Blade.

I think the only reason I even got an interview was because I was a recently discharged veteran, but that didn’t mean much. I can still remember the editor glancing at my resume and flipping it back across his desk at me. “Kid, neither you nor I are ever going to live long enough to see your name on a byline,” he said, dismissing me. “Do yourself a favor and go get a job on the assembly line at Jeep or the post office.”

Since then I’ve owned several weekly newspapers, one daily, as well as niche publications, and I’ve authored a dozen books. I’d like to look that man up someday and shake his hand. Or maybe piss on his grave.

Thought For The Day – Blowing out another person’s candle will not make yours shine brighter.

3 Responses to “Golf Carts And Bylines”