Nick's Blog » Getting A Move On

After being so lazy on Saturday, I decided that that yesterday I had better get a move on before Miss Terry decided she had to dust me. Kind of like that old Army saying that if it moves, shoot it, and if it doesn’t move, paint it. Actually, maybe that was a bad idea; I know what a good shot Terry is!

After the requisite checking of e-mails and blogs yesterday morning, I finished unhooking all the wiring and cables from my old Dell desktop computer so it could go away. Now we have a lot more room and a lot less tangle next to my desk. Even though I’m using the new Asus laptop for posting my blogs and trip planning with Microsoft Streets & Trips, since I can’t do either one on my iMac, I still kept the big 21 inch flat screen monitor that I used with the Dell and hooked it up to the laptop. I’m also using the wireless keyboard and mouse from the Dell because they all work better for me than the smaller laptop screen and keyboard.

We really like Seasons in the Sun RV Resort here in Titusville. It’s a very nice campground with every amenity we could want or need. Here’s our Winnebago on our site. As you can see the sites are nice and roomy. 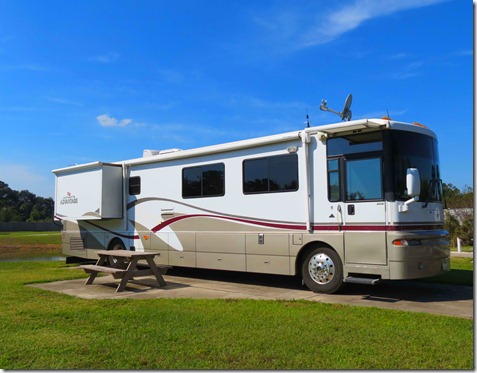 There are also several small ponds on the property. They have signs that say Please Don’t Feed The Gators, but that’s no surprise because anything holding more water than a birdbath in Florida probably has at least at one alligator in it. As long as you leave them alone and keep and eye on your pets, they’re not a problem. 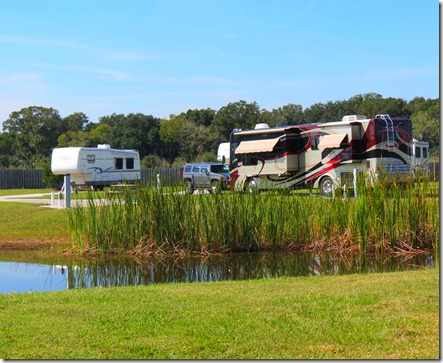 Someone wrote me yesterday that they would never come to Florida because a friend lost their cat to an alligator a while back. Yes, that can happen. Just like you can lose small pets to coyotes, hawks, owls, eagles, and other predators anywhere you go. A lot of people think coyotes are a Western animal, but they can be found just about anywhere in the country, including big Eastern cities. And to them your cat or dog is not a pet, it’s dinner.

During the afternoon we drove into town so Terry could pick up a few things she needed at WalMart, and then spent some time just driving around Titusville checking out the neighborhoods off the main streets.

We also cruised through Manatee Hammock, a county park on US Highway 1 on the shore of the Indian River Lagoon. The park has 147 full hookup RV sites and is a Passport America affiliate. There are a lot of trees, and one would have to use care navigating the turns on the interior roads in a big RV, but we saw several of them there. At the $15 a night Passport America rate it’s a good deal.

Then we drove out onto the causeway leading to the Merritt Island Wildlife Preserve and stopped to watch some of the folks fishing and enjoying the water. There wasn’t much of a breeze so we didn’t see any windsurfers like we did at couple of days ago, but there were still a lot of folks out there enjoying the pretty day. This fellow was fly fishing, and while he didn’t catch anything while we were there, we did see him get one good bite. 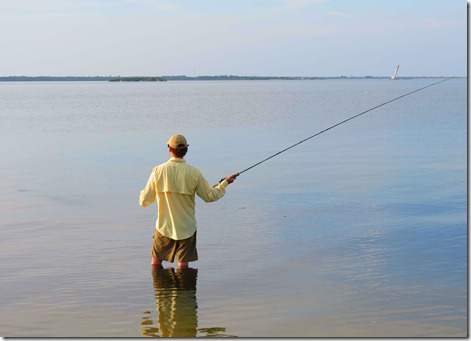 Overnight camping is not allowed on the causeway, but there were a couple of motorhomes out there, their owners sitting out in lawn chairs, fishing and watching the fish jumping all over the place. 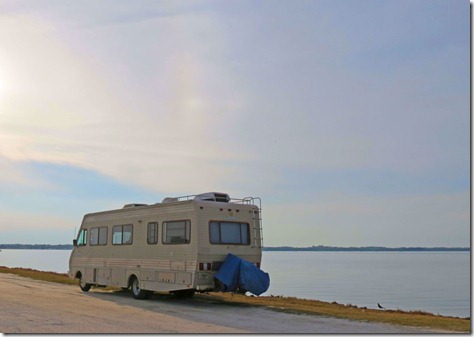 Since it was our last night in Titusville, we just had to stop at Dixie Crossroads again for some more of their delicious Royal Red shrimp, and they were delicious.

Today we’re heading for the Keys. Our reservations actually start at Sunshine Key RV Resort on Big Pine Key tomorrow, and it’s only 350 miles, which we would normally do in one day, but we know that once we get onto US Highway 1 in the Keys, it will be slow going. So we will stop someplace for the night on the way down and finish the trip on Tuesday.

Thought For The Day – A Native American’s view on Daylight Savings Time: Only a white man from Washington believes you can cut a foot off one end of a blanket and sew it on the other end and think you have a longer blanket.

3 Responses to “Getting A Move On”