Nick's Blog » The Day After

With the Ohio rally behind us, we slept in yesterday morning, and when we did wake up we spent another hour so just snuggling and enjoying being together after our busy week. It was nice not to have to jump out of bed and be rushing off to do something.

When we did get up, we checked e-mail and Terry relaxed over a cup of coffee. Our friends Mike and Elaine Loscher, who had been parked next to us during the rally, left sometime early yesterday morning, long before we woke up. A little before noon, Stu and Donna McNicol moved their fifth wheel and medium duty truck into the newly vacated RV site so they could have full hookups.

Once they were settled in, they came over for a visit and we were soon joined by Jim and Chris Guld from Geeks on Tour and then Chris Yust. What a houseful in a motorhome! But we had a nice time visiting with everybody and Donna showed me a much easier way to add a table of contents to my books and e-books than I have been using.

The party broke up and Miss Terry made a WalMart run while John Huggins, from the Living the RV Dream podcasts, spent some time with me teaching me how to insert hyperlinks into that table of contents Donna had helped me with, so that e-book readers can click on a chapter and go right to it. Thanks Donna and John for all of your help!

Speaking of books, Crazy Days in Big Lake, the third book in the series, has been out three weeks now and as of last night was rated #64 for Kindle e-books on the Mystery & Thriller/Police Procedural list. Thanks for helping spread the word by telling your friends and posting such nice reviews.

We had been hearing a lot of noise from the racetrack here at the fairgrounds for most of the afternoon, so I walked over to check it out. It was a truck pull, and apparently the idea was to hook two pickups together by their rear bumpers and for them to take off in opposite directions seeing which one had enough power to pull the other along with it. I watched for a little while and came away convinced that there sure are a lot of ways people can find to waste time and money. But to each his own, right?

About 5 o’clock a bunch of us got together at the China Wok Buffet for dinner. Several people, including Charles and Chris Yust and Jim and Chris Guld are leaving today to head for the Escapade in Sedalia, Missouri so it was a last chance to have some time together before they hit the road.

We have been hauling five large coffee urns around the country to use at our rallies and now that that phase of our lives is over, they needed to find a new home. Elaine Loscher took one of them  to the Lone Star Escapees Co-op in Hondo, Texas, where they have a lot, and I loaded up the four we had left and took them to the local VFW post. They can use them and it helped free up a lot of space in one of our Winnebago’s storage bays.

Back at the fairgrounds, several of us sat outside swapping lies for a while, including Stu and Donna, Charles and Chris, Greg and Jan, Dave and Jean Damon, and Jim and Chris Guld. Here is a picture I took of Terry and Chris Yust. What a nice looking pair of ladies! 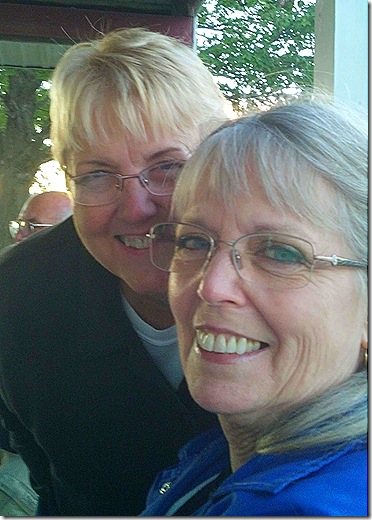 Today we are going to play tourist with Greg and Jan, visiting the Air Force Museum at Wright Patterson Air Force Base, and the Dayton Aviation Heritage National Historical Park. We are looking forward to having a lot of fun. Tomorrow we will probably leave Celina and go to the Indian Lakes Thousand Trails preserve in Batesville, Indiana for a couple of weeks. Did I mention it’s nice not to have to be any place for a while?

Thought For The Day – By the time a man is wise enough to watch his step, he’s too old to go anywhere – Billy Crystal

8 Responses to “The Day After”