Nick's Blog » I Could Get Used To This

After two weeks at the Indian Lakes Thousand Trails preserve near Batesville, Indiana, it was time for some new scenery. We really liked the campground and the area around it, but management’s apparent lack of concern about the rowdy pipeline crowd that stays there long term spoils a lot of the experience. I’m not sure who’s in charge, or if it’s a case of the inmates running the asylum.

So, of course, when we returned that evening the guard shack was empty and we couldn’t get in. Greg used the radio provided to call the guard if he was out on his rounds, but after several tries, got no response. Finally Greg gave up and unhooked a rope blocking access over a grassy area and we drove in. Greg knew about the rope because the same thing happened to them when they stayed there last year!

Except for a few construction zones, it was an easy traveling day. We ran into another construction zone and a delay as we crossed the Ohio River into West Virginia, but by 4 PM we were parked at the Cabela’s in Triadelphia, a couple of miles east of Wheeling. Cabela’s is another RV friendly business, with separate RV parking areas at most of their stores nationwide. We had covered 270 miles since we left the Thousand Trails campground. I could get used to this relaxed lifestyle!

I want to thank everybody who bought copies of my new book, Overlooked Arizona, after I reported that it is now available in the Amazon Kindle bookstore. It went live early yesterday morning, and by the end of the day had already risen to #4 in the Kindle Store in the Tourist Destinations & Museums, and #6 in Amazon’s general travel books for the western United States. 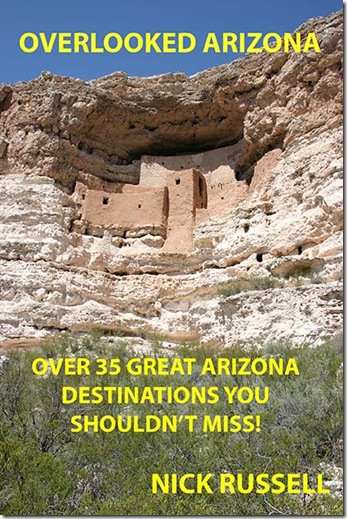 Today we’ll drive another 260 miles or so to the Hershey Thousand Trails preserve, which is one of our favorites in the system. Unfortunately, much of the trip will be across the Pennsylvania Turnpike, which has the distinction of being both one of the most expensive toll roads we’ve ever traveled, and one of the worst roads in the nation. They must pay the folks working at the tollbooths exorbitant salaries and lavish them with benefits, because they darned sure don’t spend much on repair and maintenance!

14 Responses to “I Could Get Used To This”