They say that the only difference between men and boys is the price of their toys. Thinking back on some of the toys I’ve had over the years, I guess that’s true. At one time or another in my misspent youth I’ve had everything from sports cars to boats, antique cars, guns, motorcycles, and even half ownership in a little puddle jumper airplane. One of the good things about living in an RV is that there isn’t room for all those toys. Of course, these days there isn’t room in my bank account for them either!

So we bought the planes, and yesterday afternoon we went out into a big field here at the Thousand Trails campground to see how long it would take us to break them. As it turns out, we did pretty well! Well, I did anyway. Greg promptly flew his into a tree, but he got lucky and it bounced through the limbs all the way to the ground and landed intact.

That’s not to say I had any idea what I was doing with the darn thing. But if they gave out gold stars for flying around in erratic circles before bouncing off the ground a couple dozen times, I’d be head of the class!

At some point Miss Terry walked over with her camera and took a few pictures. I’m thinking that mostly she wanted them for proof of just how immature both of us are. 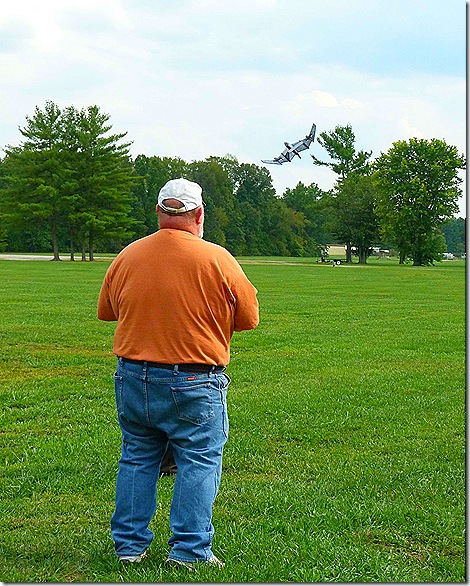 As for the cameras mounted on the planes, they take both still and video pictures. If you’re prone to motion sickness you sure wouldn’t want to watch them, because they show the view from the planes as they bounced around in the air, dipping and turning, mostly out of control. We got a lot of really great pictures of grass as we crashed over and over.

Later in the evening our friends and Russ and Deb Davis came over and joined Greg and Jan for a visit at our motorhome, and the six of us had a good time swapping lies and talking about life on the road. For the last three or four years Russ has been telling me that they are going to become fulltimers, but he’s got a nasty habit of working for a living that seems to interfere. Come on Russ, kick that monkey off your back and go cold turkey! You’ll be glad you did.

Whenever possible we prefer not to make RV park reservations because we like as little structure as possible in our schedules. But we know that campgrounds can get busy in Florida in the winter so I have been online booking our winter stays. As it stands right now we have two weeks booked at the Encore Sunshine Key Resort on Big Pine Key starting in early November, followed by three weeks at Three Flags in Wildwood Florida, and then three more weeks at the Orlando Thousand Trails. That will take us into early January, and from there we’ll probably try to scoot over to Crystal River for a week or two and paddle our kayaks with the Manatees again.

Since we don’t have to rush back to Arizona, we’ll have a slow trip across the country when we do start west for family time and medical appointments sometime in the spring. I think I can get used to this slower paced lifestyle if I really try!

Thought For The Day – Skydiving – good to the last drop.