Nick's Blog » All Over But The Goodbyes

Yesterday was another busy day here at the Gypsy Journal rally, the last full day of seminars and activities. As usual, Miss Terry was up by 5 AM so she could get down to the Junior Fair Building to make sure that morning coffee and donuts went off without a hitch. Lazy me, I finally rolled out of bed a little before 7 AM and made it there by 7:30 to get my share of donuts.

A large part of the day was spent visiting with people at the registration desk and out mixing with the vendors and rally attendees. Sometime in the afternoon Barbara Westerfield spent an hour or so helping me get my various e-mail accounts forwarded to my Droid Razr Maxx smart phone. Thanks for all your help Barbara, you make so much of this complicated technical stuff seem like child’s play.

I presented my final seminar of the rally from 4 to 5 p.m. It was called 100 Miles From Here, which showed all of the neat attractions, museums, historical sites, and other points of interest within 100 miles of Celina. I had a nice turnout and everybody seemed to enjoy it.

The vendors started packing up in late afternoon, and by 6 PM most of them were out of the building. At 7 we held our final door prize drawings, giving away more RV accessories, passes to the RV Museum in Elkhart, another Amazon Kindle e-book reader, and lots of other goodies.

And then it was time for the Grand Prize drawing, a Sea Eagle 370 Pro package donated by our friends Tim and Crystal Ryerson from Inflatable Boats 4 Less. There sure were a lot of people sitting on the edges of their seats, hoping their names would be drawn.

And when I drew the winning ticket I couldn’t help but smile, because I cannot think of anybody who deserved it more and would appreciate it more than Thelma Middleton. Thelma and her hubby Dave have been to all of our Eastern rallies, and are always among the first people to volunteer for whatever needs done. Every morning they’re busy passing out doughnuts, or helping at the registration desk, answering questions for rally attendees, and doing whatever else needs done. And then at the evening door prizes, they’re right down front acting as runners to take the door prizes out to the lucky winners in the audience. 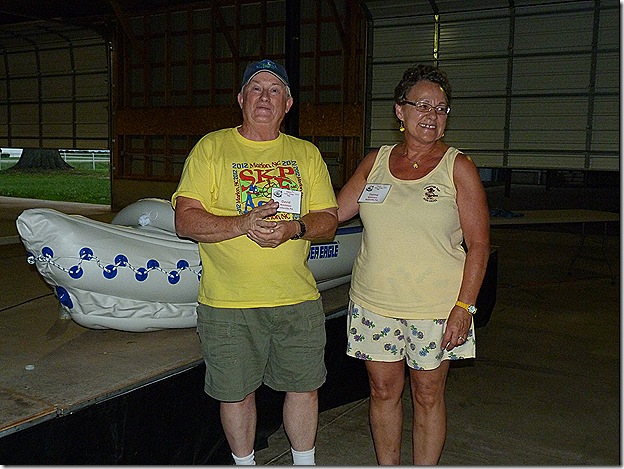 Thelma and Dave recently purchased a Sea Eagle 435 PaddleSki inflatable boat from Tim and Crystal, the same model I have, and they have been enjoying it on the rivers and lakes in Pennsylvania. Once Thelma finally calmed down enough to talk after hearing her name announced as the winner, she said she had been hoping to buy a Sea Eagle of her own. Doesn’t she look happy? Congratulations my dear friend. 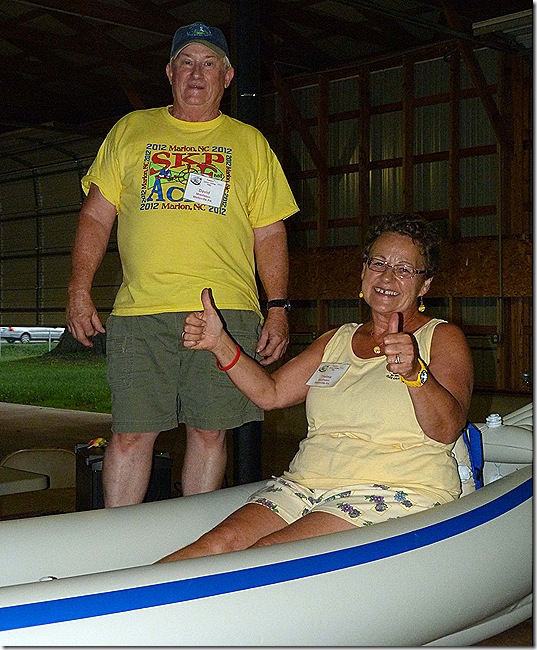 Before I started announcing the door prize winners, we thanked everybody for attending the rally, and then Miss Terry received a much-deserved standing ovation from the crowd for everything she does to make everything we do a success. I love you darling, and I promise we are going to have some of that downtime you so greatly need and deserve.

After the door prizes were all awarded, a crowd of people gathered around the back end of our Explorer to take bundles of the Gypsy Journal with them to wherever they were heading, helping to spread the word to new readers from coast-to-coast.

So it’s all over but the goodbyes, and there will be a lot of them today as folks get together for the last round of coffee and doughnuts, hugs, and assurances that we’ll all see each other again somewhere, sometime, down the road.

Thought For The Day – I used to be a people person, until people ruined it.

2 Responses to “All Over But The Goodbyes”