Nick's Blog » Getting A Lot Done

We’ve been getting a lot done in preparation for leaving Elkhart in a few days to go to Celina, Ohio for our Gypsy Journal Rally. If we keep up this pace, we may even have a day or two to catch our breath and relax before we take off.

Miss Terry has been busy working on the mailing, stuffing envelopes faster than I can carry the filled postal bins out to the Explorer. We will be taking a big load to our commercial mail service in South Bend today, which will make room for the next load.

We track our subscription numbers from issue to issue, and we’ve seen an interesting trend over the last couple of years. The number of subscriptions going to mail forwarding services like the Escapees Mail Service, Alternative Resources, and the FMC Mail Service have all declined over the last two years, as has the number of subscribers receiving their paper by Standard Rate (bulk) mail.

On the other hand, subscription numbers for our Digital Edition and First Class Mail subscribers are up. It seems like more and more subscribers are migrating to the last two options. There was a time when we sent hundreds of papers to Escapees in Livingston, Texas, but now it’s less than 100. We used to send large numbers to subscribers using the FMCA Mail Service, and now I can count them on the fingers of one hand. We will never stop printing a physical issue of the Gypsy Journal, but I have been surprised by how many folks prefer the Digital Edition of the paper. I guess it makes sense; they get their subscription before anyone else, they don’t have to mess with mail forwarding if they are traveling, and they can save the paper on their computer without adding extra weight to their RV.

Okay, on another note, what’s wrong with this picture? I mean besides the fact that my buddy Ron Speidel looks like a Munchkin standing between Tom Westerfield on the left and Charles Yust on the right? The guys are remounting the mirror I tore loose when I smacked it on a tollbooth on the Ohio Turnpike our last trip. Can you spot what’s missing? 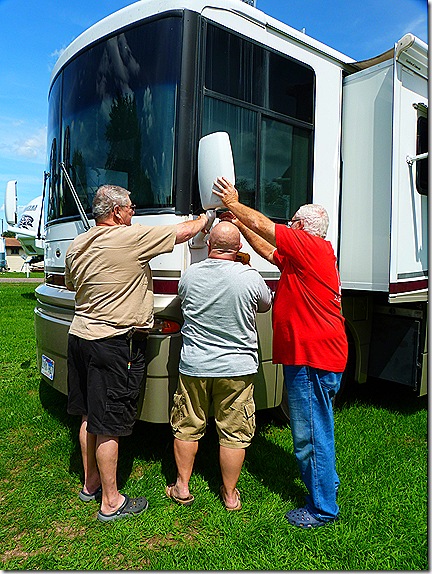 Where the heck is Greg White? That slacker is off somewhere in Texas hiding out instead of being here taking care of my needs! That’s totally inexcusable! If I paid him anything at all for all the work he does for me, I would dock his wages!

Of course, I know the way Greg thinks. Instead of being remorseful and ashamed of himself for shirking his duties, he’s gloating because it takes three men (okay, two men and a Munchkin) to do the kind of jobs he usually is stuck with all on his own.

I will leave you with a funny story before I close out today’s blog. My friend Orv Hazelton called the other night to tell me that he and his bride, Nancy, were boondocking at a Cabella’s sporting goods store, and there was also a truck driver parked there for the night. Orv said he talked to the trucker for a while when he took their dog for a walk, and later on he looked outside to see a bunch of police cars in the parking lot. They were there for a while and then left. Orv saw the trucker again and asked him what was going on. Apparently the gear jockey had noticed a car pull up next to a light pole in the parking lot, the driver got out and was acting suspicious and appeared to leave something before driving away. Concerned that it might be something illegal, the trucker called the police. Was it a drug deal going down? A terrorist attack? No, it was a geocache. But what the heck, better safe than sorry, right?

Thought For The Day – It’s never too late, in fiction or in life, to revise – Nancy Thayer

7 Responses to “Getting A Lot Done”