Nick's Blog » From Pioneers To A Cat In A Hat

We were up very early again yesterday morning, which is starting to become a habit with us. A nasty habit that we need to nip in the bud! But it was worth it, because we had a very busy day and a lot of fun too!

We left the campground about 9:30 AM and drove 65 miles to Historic Deerfield, a 300-year-old New England village with a lot of history surrounding it. From the Native Americans who lived on this land for 8,000 years, to the English settlers who arrived in 1669, the farmers, merchants, and townsfolk of Deerfield have seen both tragedy and prosperity over the centuries. This is evident in the memorial to the 56 men, women, and children who were massacred here during a 1704 raid during the French and Indian War, as well as in the stately homes that line the streets, and the elite Deerfield Academy college preparatory school.

Today, visitors to Historic Deerfield can tour eleven historic homes filled with a world-class collection of antiques, participate in hands-on workshops in the History Center, see an amazing collection of early American silver, and much more. 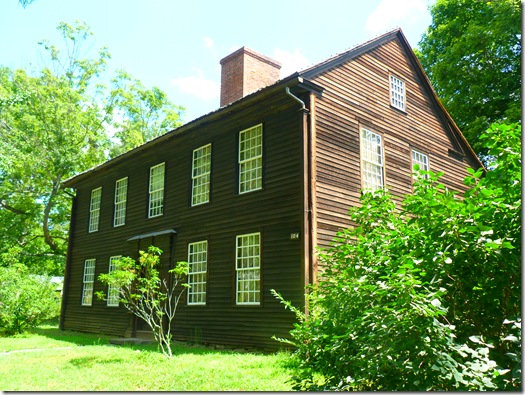 A highlight for Terry was a demonstration on how flax grown right there in Deerfield is harvested and processed to make fiber, which can then be spun and woven into fabric. Terry is fascinated with fibers and has a spinning wheel, a small tabletop loom, and her circular sock knitting machine, all here in the motorhome. She’s negotiating now on two llamas and a herd of sheep to produce her own fleece. 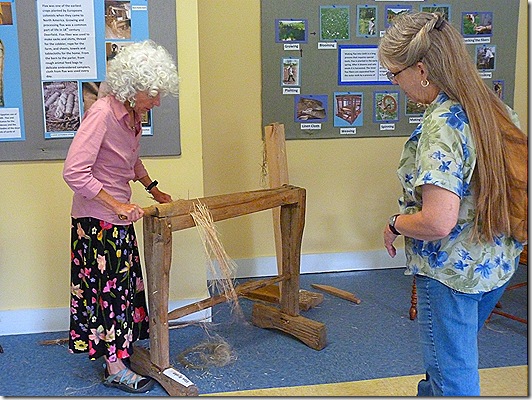 From Deerfield we drove to Springfield and toured the Springfield Armory National Historic Site, where for over 174, years talented craftsmen and women produced the firearms supplied to our Armed Forces.

The Armory turned out everything from muzzle loading muskets to automatic weapons, pistols, revolvers, and even bayonets. They have an interesting display of early-day equipment used to turn wood and iron into top-quality firearms that were the best of their day. The armory was a place of both innovation and invention, and the techniques learned here were adopted by industry worldwide. 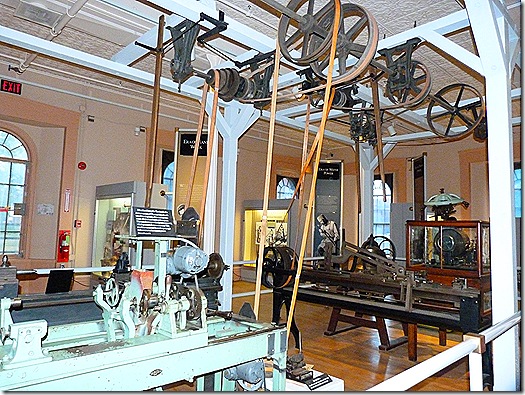 They have an amazing collection of firearms on display, everything from single shot muzzle loading pistols and rifles, to Gatling guns, machine guns, and every type of military small arms imaginable. For a gun nut like myself, it was Nirvana. 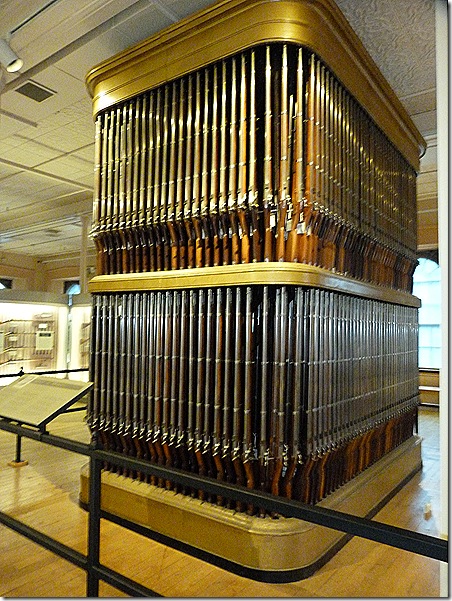 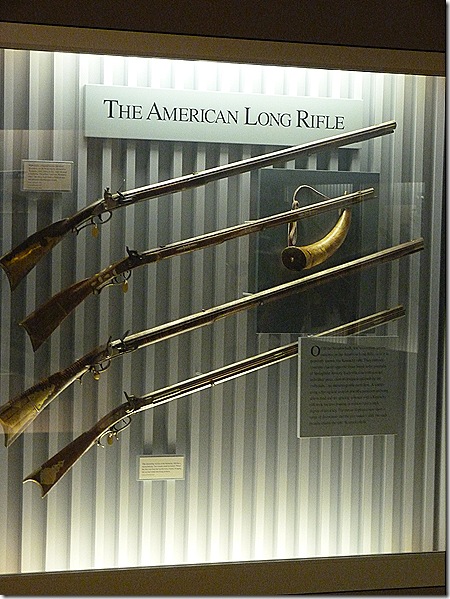 The displays are housed in one of the Armory’s old buildings, which in itself is a treasure of early day industrial architecture. 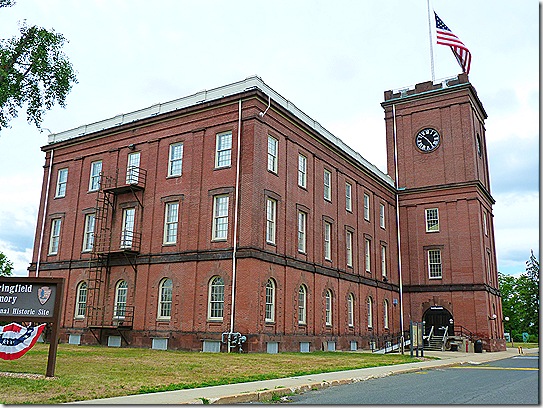 Less than a mile from the Armory, we stopped at the Springfield Museums complex to check out the Dr. Seuss National Memorial Sculpture Garden, which honors author and artist Theodore Geisel, whose children’s books have delighted generations of youngsters around the world.

There are several life-size bronze sculptures of characters from the Dr. Seuss books, and even one of the author and one of his favorite creations, the Cat in the Hat. 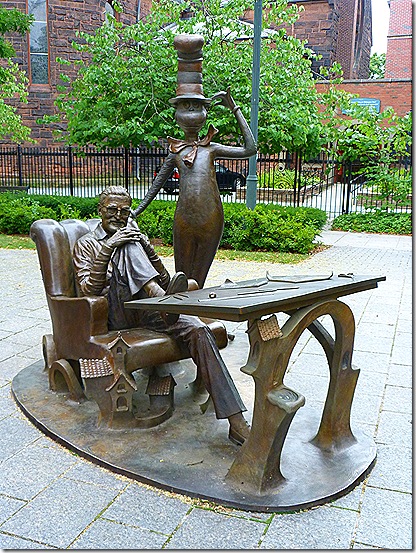 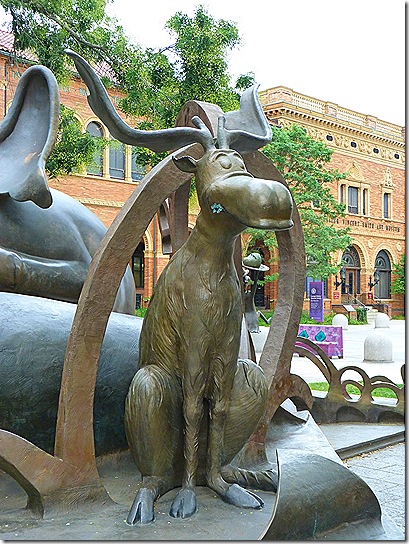 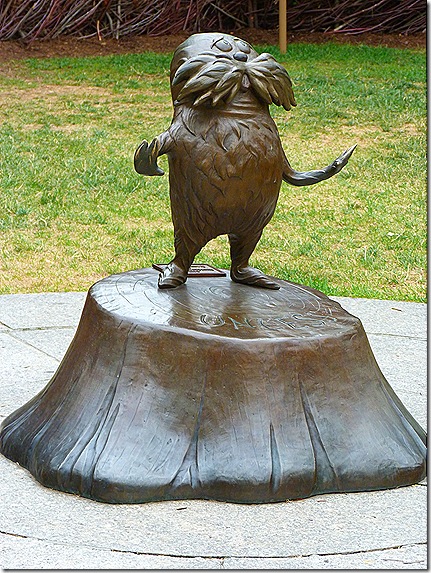 Terry was fascinated by the elaborate Stickwork sculpture called Room by Room which was created by a local artist weaving together saplings trimmed from trees by the museum staff. It is a combination maze and work of art that kids love exploring.

Instead of getting back on the Massachusetts Turnpike to return to Sturbridge at the end of the day, we chose US Highway 20, an excellent two-lane road that went through several small towns along the way. We always prefer the two-lane roads over the interstate highways when we have a choice.

By the time we got back into town we were famished, so we stopped at Enrico’s Pizza, which we had tried the day before only to discover that they were closed. This time around they were open and very busy, but we arrived just ahead of the rush and got seated quickly. The pizza was everything we expected, and Terry’s salad was also outstanding. The only downside was a table full of people next to us that included a man with a very deep, commanding voice that drowned out any other conversation around him. And he must have been very fond of his voice, because he used it a lot!

The weatherman says we will have rain and/or thunderstorms today, but experience has taught us that around here he speaks with forked tongue. So we will just play it by ear and see what happens. If the storm bypasses us we may go out and play tourist again. Or, if it does rain or if we just feel lazy, we’ll stay home. I’ve got a lot of writing to do for the next issue of the paper, and Terry always has plenty to keep her busy.

Thought For The Day – I’m afraid of a world run by adults who were never spanked as kids and got trophies just for showing up.

8 Responses to “From Pioneers To A Cat In A Hat”