Where does the time go? It seems like we just got to Elkhart a few days ago, and it’s already time to leave! Of course, we have really been here about three weeks, we have just been so busy that the days have flown by.

We were on the go all day yesterday, dropping a bunch of orders off at the post office, doing some banking, and stopping at Wally World to pick up some items we needed. While we were there, Terry looked at the Canon SX 40 digital camera I mentioned yesterday, and I have a feeling that’s the one she’s going to go with. Somebody asked me about sending the Panasonic she has been using back to the factory for service, and I may look into that. But it’s been my experience that we live in a throwaway world and nobody fixes anything anymore, they just tell you to buy whatever their newest and latest model is. But we need a camera and can’t wait weeks to get one back from the manufacturer even if we do send it in.

Can somebody explain what’s up with sunglasses to me? I have a lot of quirks, in case you haven’t noticed by now, and one of them is that while I don’t have a problem spending money on some things, I’m a real cheapskate about others. I will wear a pair of blue jeans until the hems are frayed and they’re so thin you can see through them, but don’t look! A couple of years ago I bought two pair of cheap sunglasses at a truck stop someplace, and I think they cost me $10 each. I have worn them until they literally fell apart, so I’ve been looking for sunglasses for a while now.

What in the world makes a pair of sunglasses worth $100, or $150, or even more? I was at Dick’s Sporting Goods the other day and tried on a pair of Maui Jim polarized sunglasses and was really impressed with them. They were lightweight, very comfortable, and I was ready to buy them until the pretty little girl behind the counter told me they were $150. Whoa! Stop! Forget about it! I could’ve bought 15 pairs of my truck stop sunglasses for that kind of money. Then she showed me a pair of Oakley’s that cost even more. I finally gave in and bought a $20 pair of sunglasses at WalMart yesterday. They’re not as light as the Maui Jim’s were, but that extra $130 sure feels good in my pocket.

Back at Elkhart Campground, a couple of women with several dogs flagged us down, and we chatted with Trudy Gableman and Gloria Criswell for a few minutes. What a deal, a puppy fix and pretty ladies to talk to. I’m telling you, life just doesn’t get much better than that!

For a while now I have been toying with taking some of the old stories from the Gypsy Journal that have been sitting in my computer and recycling  them into regional travel books. I figure I have already done most of the work in researching and writing the stories, so all I have to do is update them a little bit, if necessary and format them into e-books.

I decided to give it a try and yesterday I published a new book titled Overlooked Florida, Over 30 Great Florida Destinations You Shouldn’t Miss! It has stories about frontier forts, wildlife refuges, historic museums, Cracker homesteads, and fishing towns, just waiting for you to discover them, away from the glitter and glitz of Orlando and Disney World. I announced the new book on my Facebook Author’s Page, and within three hours had sold five books! My readers are the best! Check the new book out and and see if it might help you plan your next trip to the Sunshine State. 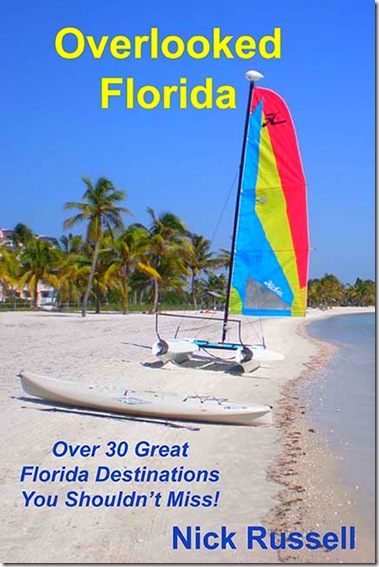 We are leaving Elkhart today and driving to the Mercer County Fairgrounds in Celina, Ohio to get ready for our Gypsy Journal Rally. It’s only about a three hour run, so we will leave about the crack of noon, and should arrive and get settled in just about time to go to the Chinese buffet for dinner. 🙂

Thought For The Day – The trouble with her is that she lacks the power of conversation but not the power of speech – George Bernard Shaw.