We left Sturbridge about 10 AM and got on Interstate 84 westbound, crossing into Connecticut in just a couple of minutes. Strong storms were predicted for later in the afternoon and we wanted to get to Beacon, New York before they hit.

Traffic was not too bad as we skirted the south side of Hartford, then it started to pick up and became moderately heavy the rest of the way across Connecticut. We arrived at the Beacon Elks Lodge about 12:30 PM with 135 miles under our belt for the day. We parked in the back of the Lodge and plugged into 20 amp electric, which was nice because it was very hot and we wanted some air conditioning. Yes, you can even use your air conditioner on 20 amp power in a 40 foot motorhome! 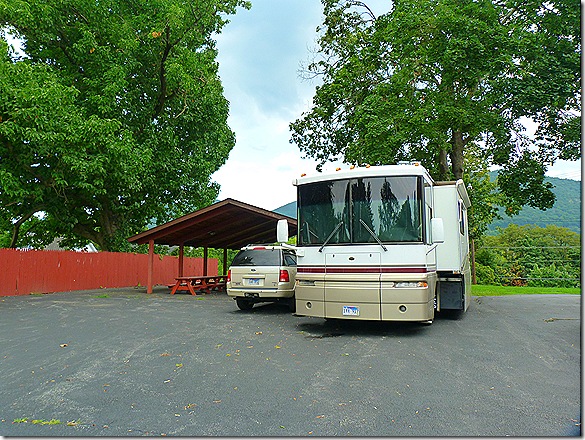 About 1:30 the predicted storm hit us, with a lot of thunder, some lightning, and a real gully washer of a rain storm. It only lasted for about half an hour or 45 minutes and then cleared out.

About 4 o’clock we left in the Explorer and drove across the Hudson River, then took Route 9W south a few miles to the small town of Highland Falls, and West Point. When I was in the Army I spent a couple of years as a firearms instructor at West Point after I came back from overseas, and it was the best duty I ever had. If I could have stayed there I’d have made a career out of it. I’ve always loved the Military Academy, with its granite gothic buildings and picturesque setting on a bluff high above the Hudson River. 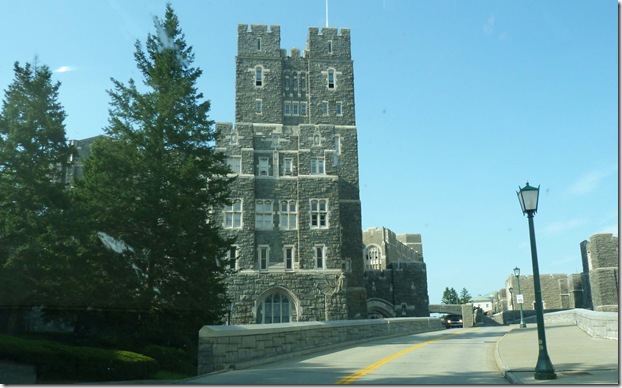 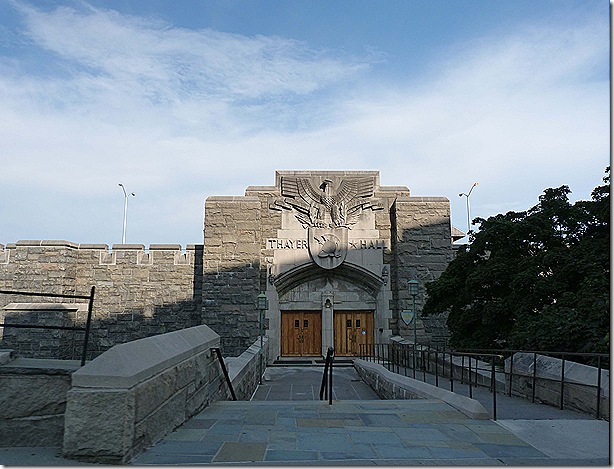 We went back on the first anniversary of 9/11 and the place was locked down tight. We were able to take a tour bus onto post, but could only stop at a couple of places for a few minutes and armed guards were everywhere. My understanding from the internet is that the post is still tightly restricted.

So it was a real unexpected treat to get to do something I never thought I would again. On a whim, I stopped at the guard gate and told the man on duty I had been stationed there years ago, and asked what the entry restrictions were these days. He said no problem, he only needed to see our IDs and look in the back of the Explorer, then said have fun.

It was late afternoon, so we only drove around for a little while, but what a treat it was for me to see so many old places we hadn’t been able to see on the bus tour.

This is the Cadet Chapel, which was built in 1910. During June Week, when the new class graduates, there are weddings here every half hour or so for several days. I know, because it was not unknown for me to put on my dress uniform and slip into the line to kiss a bride or two! Yes, Bad Nick was alive and well even back then! 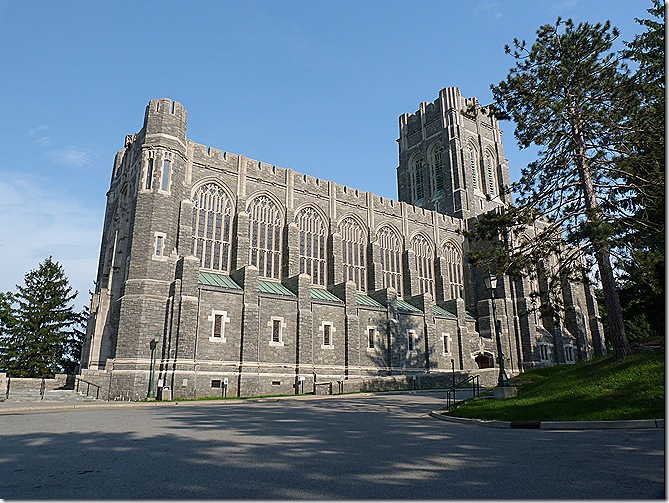 And this is Michie Stadium, home to the famous Black Knights of the Hudson football team. On game weekends, this place is always a madhouse. 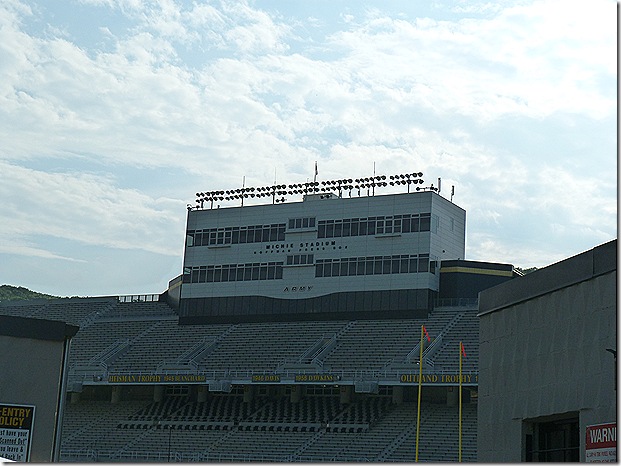 This is one of my favorite places at West Point; Lusk Reservoir. A nice place to fish, ice skate in the winter, or just sit and reflect on life in general. 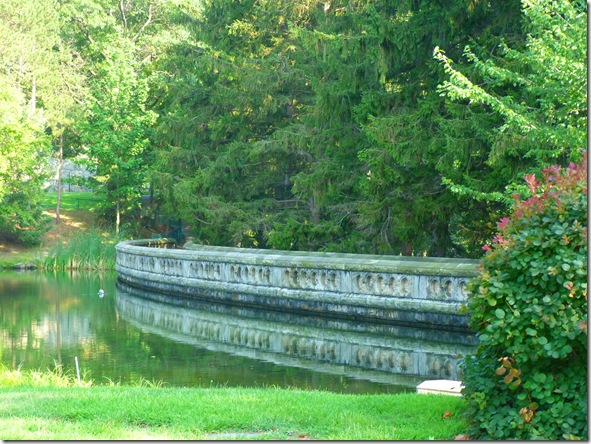 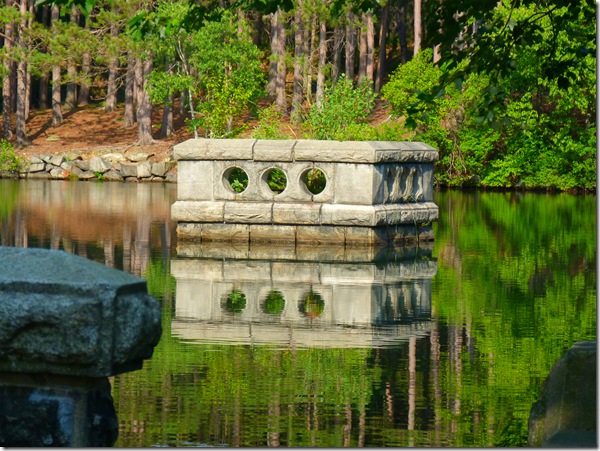 We drove by my old barracks, a beautiful old building that was an antique even when I lived there, and a young soldier was getting out of his car in front, so I stopped to talk to him for a while and he invited me inside to see how things had changed since I left in 1974. I asked if he was sure that was okay, and he said, “You were one of us, and you still are.” 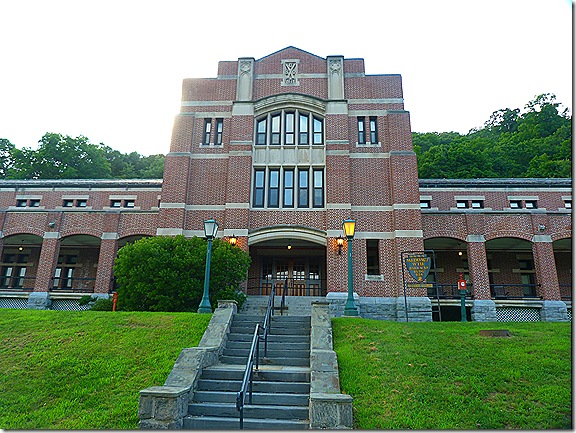 And wow, it sure had changed! Those young men and women live a lot better than we did, and rightly so. Where we once lived in open bays, now they have small one and two man private rooms. 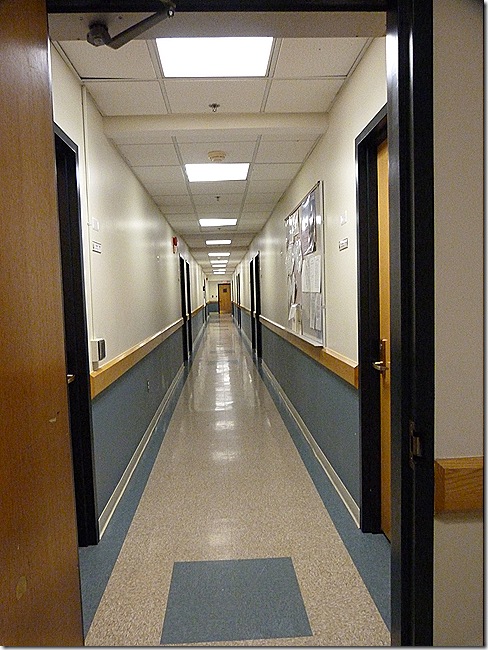 We never had rocking chairs, but I did a lot of calisthenics on cold winter mornings on this front porch. 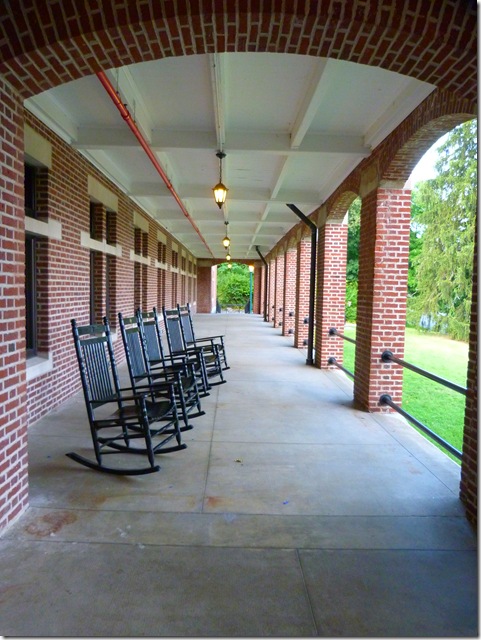 It was a wonderful trip down memory lane for me, and we will be going back again tomorrow to visit the Army Museum and to spend some more time at West Point.

We stopped for a bite to eat, and the second wave of the storm hit, and if anything it was even stronger than the first time around. But again it was fast-moving and didn’t last too long.

When we got back to the Elks Lodge the power was acting flaky, tripping breakers even though the AC was off and we were only pulling eight amps on a 20 amp circuit. The manager of the Lodge reset the breaker once, but it only lasted a few minutes. It’s a huge old labyrinth of a building and he said it had been wired back in the 1950s. From what I saw of the rat’s nest of wiring down in one of the basement levels it would be a nightmare to try to figure out how to upgrade it. He said whenever it rains they have all kinds of power problems inside the building and out.

I plugged into a different circuit, but our EMS system would not let power through and was giving me first an open ground and then a reverse polarity message. So I said the heck with it, and just flipped on our Onan diesel generator for couple of hours. An RV’s generator should get a good hard work out every month or so anyway.

In yesterday’s blog I said that we planned to take the train to New York City to see the Statue of Liberty and Ellis Island. As it turns out, one has to make reservations for the ferry well in advance and the soonest we could get reservations was Friday. We will be back in Elkhart by then. Oh well, poor planning on my part, what can I say?

Thought For The Day – If laughter really is the best medicine, how can you ‘die laughing’?

11 Responses to “An Unexpected Treat”