We were up at the ungodly hour of 7:30 AM yesterday, to make the drive to Allegan, Michigan, where our printer is located, and where they are holding the Michigan Fiber Festival this weekend.

Miss Terry is really into the fiber arts, spinning, weaving, crocheting, anything to do with them. She had never been to a fiber festival before and was looking forward to it. And what a day we had!

There were several buildings full of vendors selling everything from raw wool, to yarn, to spinning wheels, looms, instructional books and DVDs, and all sorts of accessories to go with them. We spent several hours just walking and looking and talking to the vendors and the fiber artists during their thing. Terry said she learned a lot and picked up some ideas that will help her with her own projects.

There were things like tabletop looms, which one can use to make everything from rugs to towels, to fabric for clothing. 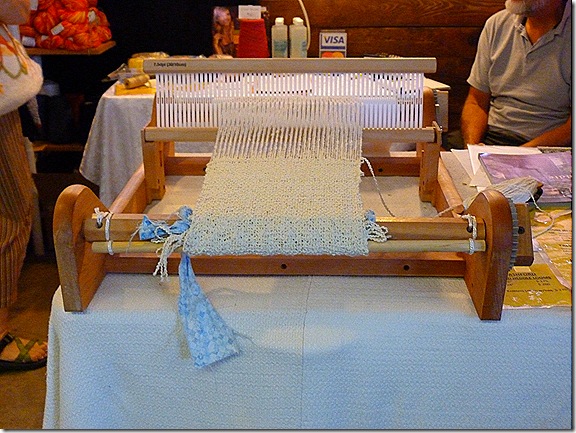 This is a hand-cranked carding machine, which is used to comb raw wool or other natural and synthetic fibers to get the strands all running in the same direction, which is one of the first steps toward making roving or top to spin or weave. 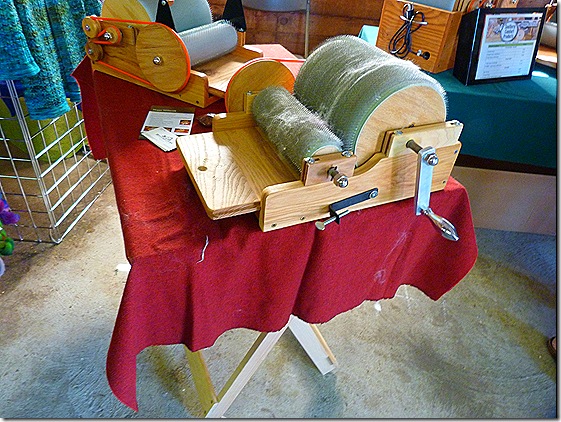 They also make powered carding machines, if you don’t want to spend your time cranking. 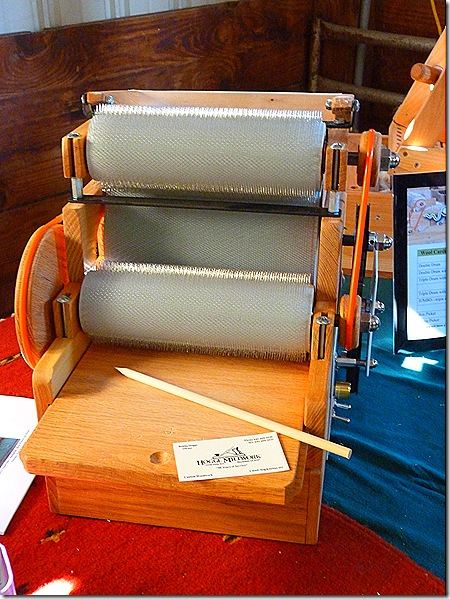 And there were all kinds of fibers to choose from. Alpaca, Angora rabbit, wool, silk, cotton, you name it and they had it. Lots of it! You could buy it by the pound, by the bag, or in any quantity you wanted. 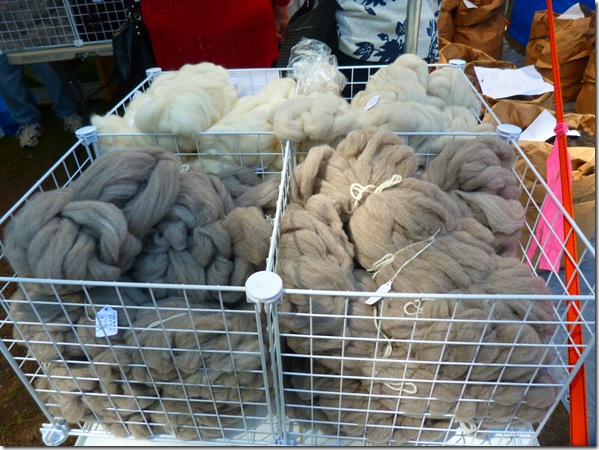 Here is somebody crushing flax to get the fibers out of it. We saw this done a couple weeks ago at the Historic Deerfield living history museum in Massachusetts. It looks like they still do it the same way today. 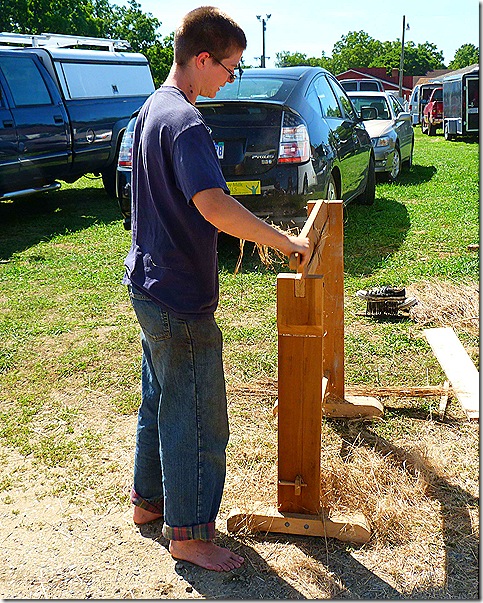 I had no idea how many people are into all of this. It was really crowded inside the buildings. If you’ve ever been to the big tent in Quartzite, it was about like that. In some of the buildings, you moved when the crowd moved, and when the crowd stopped, you stopped too. The places that were not quite as busy were equally as frustrating, because people just tended to stop in the middle of the aisle to chat, causing a traffic jam behind them.

A while back, I wrote in jest that Terry has a circular sock making machine, a spinning wheel, and a loom, and that she was out shopping for a couple of lamas to go with them. So when we saw these alpacas for sale, I will admit that I got a little nervous. But I guess Terry decided that with so much fiber available to buy, we did not need to become mobile ranchers after all. 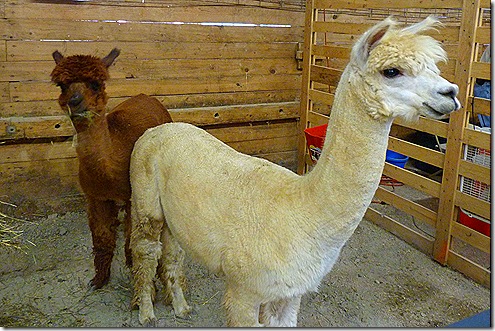 It was a fun day and I know Terry had a wonderful time. Somebody asked me if I had a good time too. Well of course I did, I was with Miss Terry! Besides, she has spent a lot of time wandering up and down the aisles at gun shows, or staring at all the pretty old rides at car shows with me. Turnabout’s fair play, right?

By the time we got back to Elkhart we were famished, so we stopped at El Meguay, Terry’s favorite Mexican restaurant in this part of the country. While we were eating, blog reader Roger King and his wife Linda came in, and were seated near us. Roger introduced himself and his wife and we got to chat for a few minutes.

Soon after we arrived back at Elkhart Campground, our friends Tom and Barbara Westerfield pulled in. Charles and Chris Yust came down and we all sat around in lawn chairs with Ron and Brenda Speidel outside their beautiful Winnebago Journey  and swapped lies for an hour or two.

This whole crowd will be in Celina in a week or two for our Ohio Gypsy Journal Rally, and Tom and Barb will be doing seminars on everything from smart phones to geocaching. Ron and Brenda will be doing several seminars including organizing your RV, getting the most out of your storage bays, and green cleaning your RV. And Charles and Chris will be there as vendors for RV insurance and extended warranty programs. They handle all of our insurance needs, and you can’t find anyone better to take care of you than them.

I mentioned that Ron and Brenda will be teaching several seminars at our rally. Brenda also has a brand-new e-book available on Amazon called 50 Ideas To Help Keep Your RV Organized, Clean, and Decluttered. It’s full of good ideas to make your life easier on the road and in camp.

This afternoon we’re all getting together for a cookout for our pal Al Hesselbart’s birthday. Al will be presenting his seminars on RV history at our Ohio Rally. I’ve got a feeling they we’re having a pre-rally and nobody told me, because I think this party is going to keep on going all the way from here to Celina.

Thought For The Day – If you can’t get rid of the family skeleton, you might as well make it dance – George Bernard Shaw