Nick's Blog » Windmills And Artists, And Old Cars, Too!

Yesterday was another gloomy day, but since it was our last chance to play tourist in this area, we decided to take advantage of it. I’m sure glad we did!

We drove the 26 miles into Sandwich, getting caught up in a long traffic jam that extended from about five miles north of the Bourne Bridge to the bridge, itself. Three lanes of traffic, plus an onramp from State Highway 6, all funnel down into two lanes to cross the bridge and immediately enter the traffic circle at the bottom on the other side. It took us most of an hour to travel those five miles, and if there had been a way to get off the highway and turn around I probably would have. So it’s a good thing there wasn’t.

Our destination was the Heritage Museum and Gardens, which are tucked away on a narrow two-lane road in Sandwich. And when I say narrow, I mean barely enough for two cars to pass each other going in opposite directions. While they have buses coming to the museum complex, I sure wouldn’t drive my motorhome down there. But it was no problem in our Explorer. And oh, the delights that awaited us!

The museum complex covers many acres of manicured and exquisitely groomed gardens, with paved pathways, as well as nature trails for those who feel a bit more adventurous. All along the way, beautiful flower gardens and plants line the pathways. 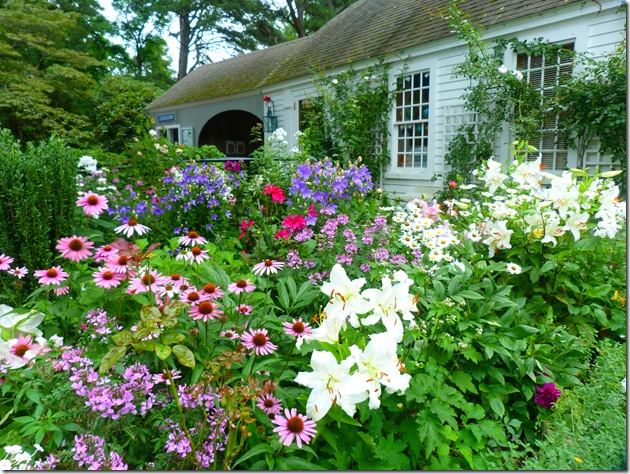 Our first stop was this beautiful round barn, modeled after the stone dairy barn at the Shaker Village in Pittsfield, Massachusetts. 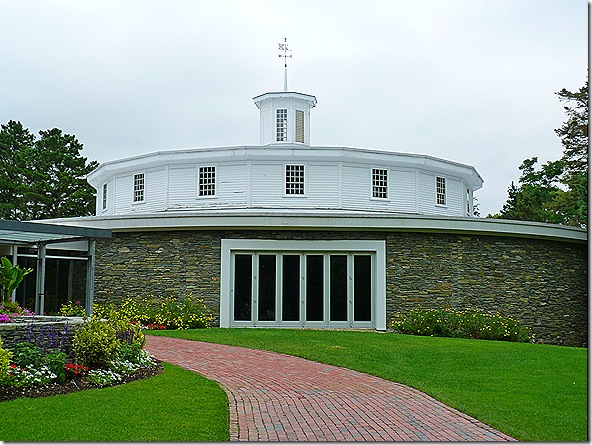 We didn’t find any cows inside waiting to be milked, but rather a beautiful collection of antique cars dating back to the earliest days of automotive engineering. There was everything from a Stanley Steamer, to a beautiful yellow Duesenberg, a couple of Woody wagons, and more. 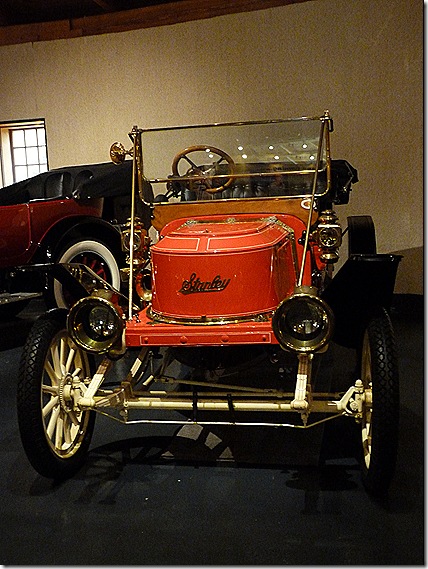 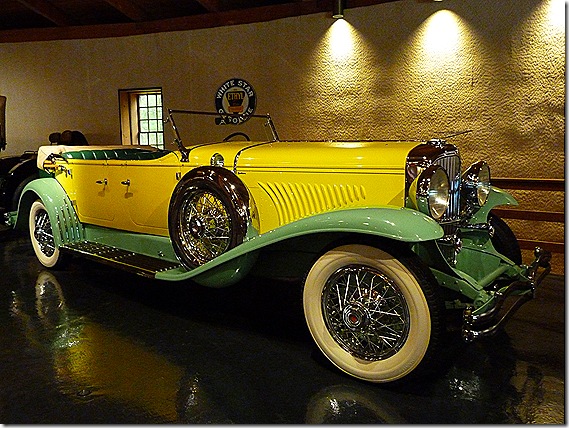 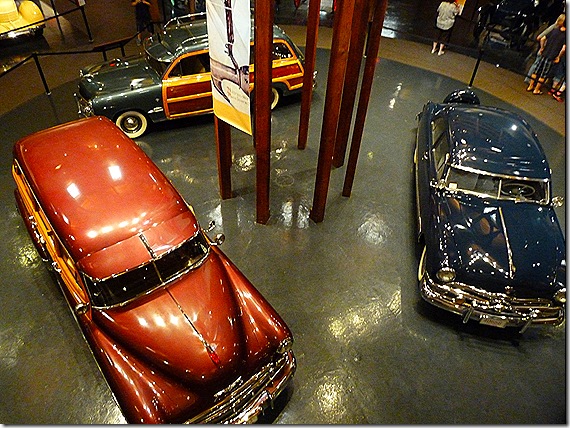 I’m an old car guy (as opposed to an OLD car guy), though I guess I fit in that category, too, since I’ll turn 60 in October. So I really enjoyed seeing these beautiful antique automobiles. 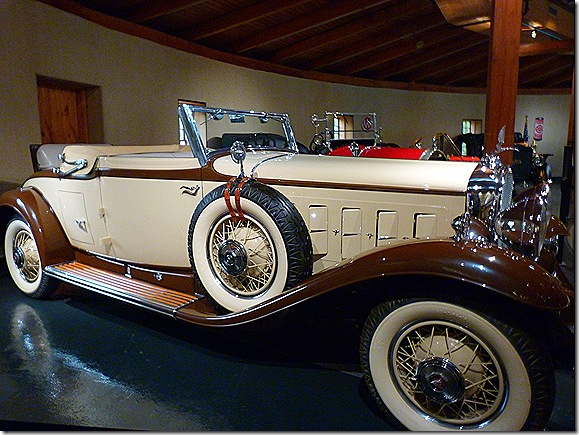 We left the automotive display and walked further down the path, where we came upon this beautiful windmill, which was built in 1800 and help supply Union troops with ground corn during the Civil War. 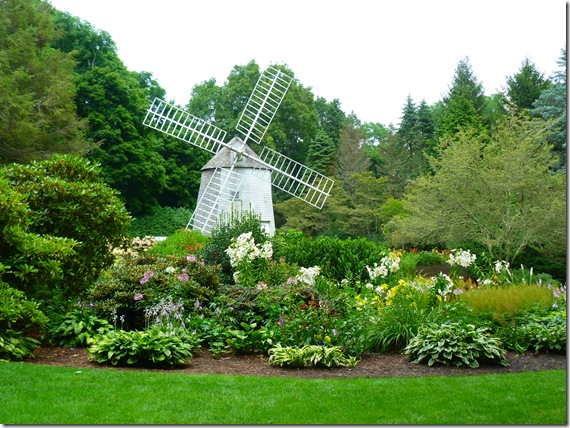 As we explored the grounds, we came across a number of whimsical garden gates that caught our attention, all created by local artists. 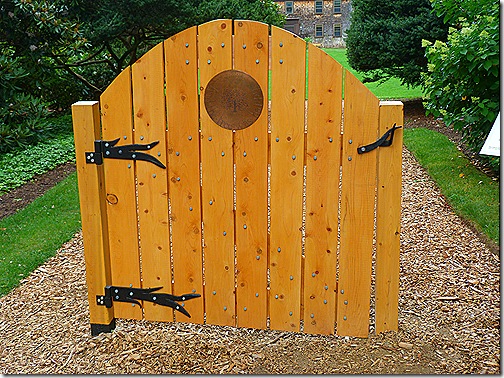 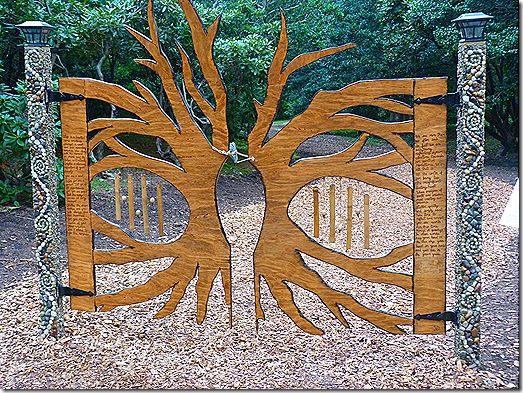 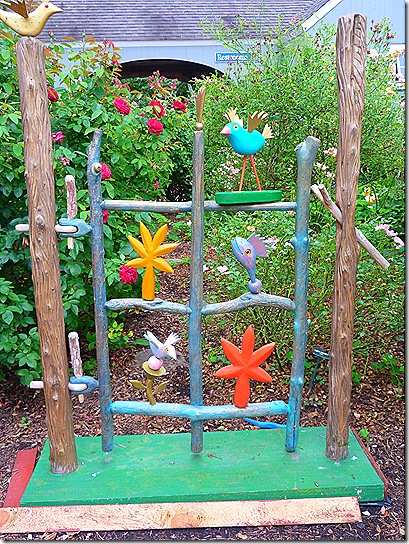 Miss Terry loves flowers and she was constantly stopping to take photos of the many beautiful blossoms on display. 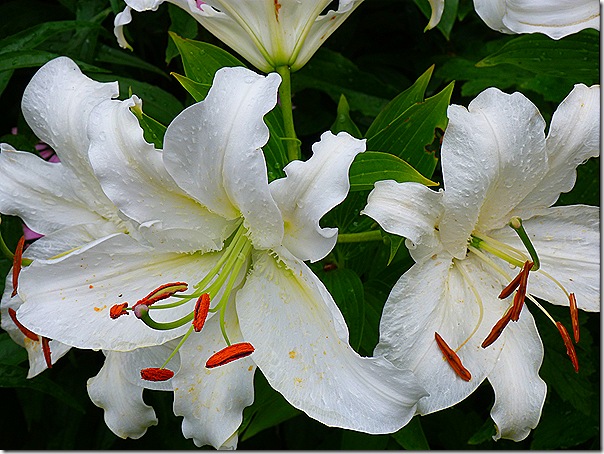 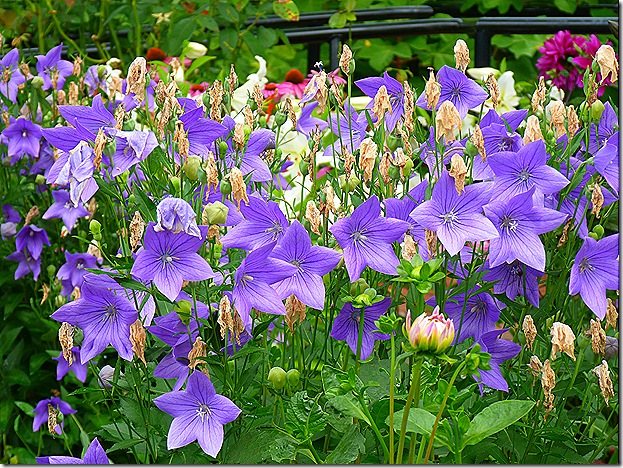 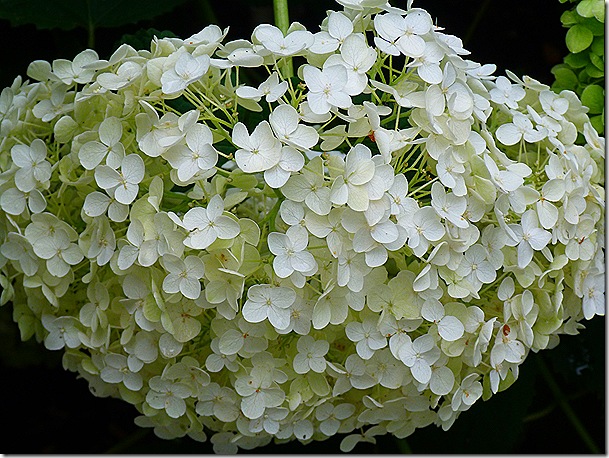 The highlight of the day for us was a special exhibit called Norman Rockwell, Beyond The Easel, which explained all the painstaking work the artist put into creating his beautiful paintings and Saturday Evening Post covers. Besides a number of original Rockwell paintings, there were sketches and photographs of the models and props that he used to create the finished product. No photography was allowed in that exhibit, but no camera could pay just tribute to Rockwell’s work anyway.

Another building housed a beautiful old working carousel and we stopped to watch kids and their parents riding the horses and other animals that have delighted children for over 100 years. 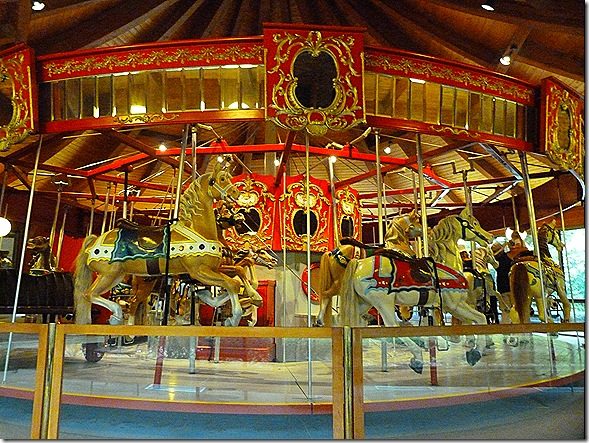 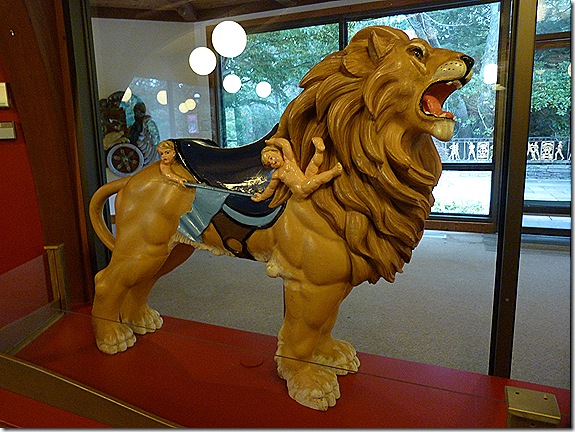 The same building held a folk art collection that included a collection of cigar store Indians and other advertising figures. 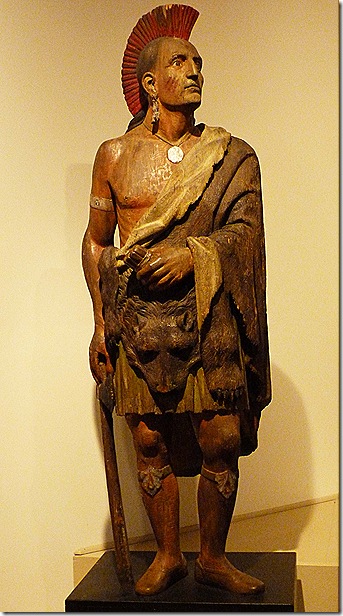 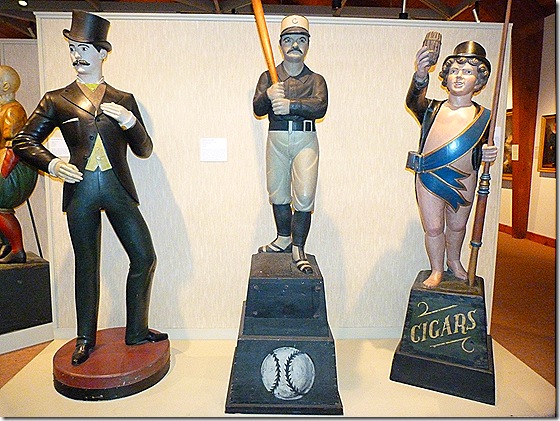 There were also interesting collections of old weathervanes, Scrimshaw, original oil paintings, and signs used to advertise businesses, including these giant scissors for a tailor shop, and this fellow that hung in front of a book and antique shop. 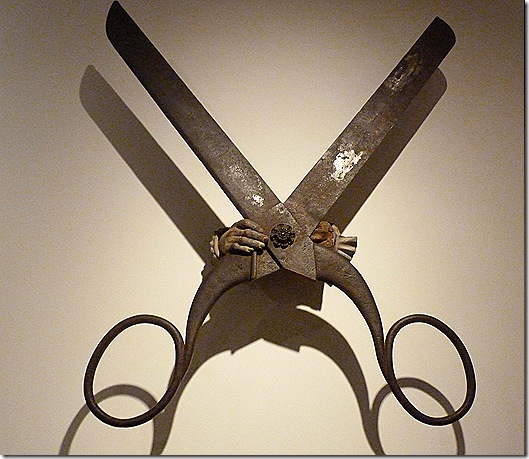 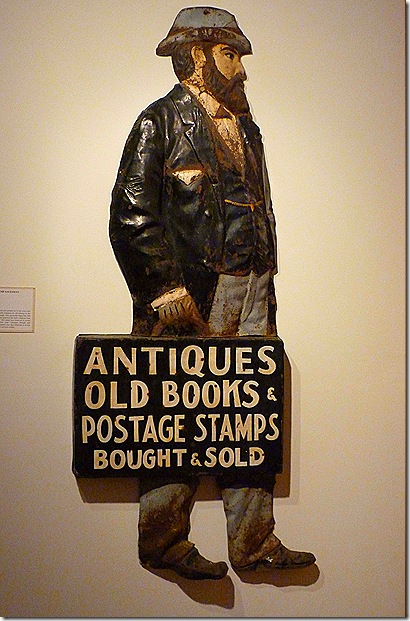 Since it was our last time on Cape Cod for a while, when we left the museum we stopped at Marshland Restaurant again for a seafood dinner. If anything, it was even better than our first time around. Terry said her lobster roll was the best she’s ever tasted in her life. And words cannot describe their scallops. Beyond delicious.

As we were crossing the Bourne Bridge back onto the mainland, a police car sped past us and got behind a black Cadillac Escalade and flipped on his overhead lights. I don’t know if the people inside the SUV were trying to evade him, or just stupid and didn’t know they had a rearview mirror to look into, because they held a steady speed of about 60 mph as the police car followed them for a good three to five miles with his overhead lights flashing. Soon we saw another police car coming from the opposite direction on the highway, and he crossed the median to join the chase, if that’s what it was.

The car continued driving along, not taking any kind of evasive action, not speeding up, not trying to get away, just staying in their lane and ignoring those red and blue lights in their rearview mirror. So another police car showed up, and then another, and then another, while all the traffic slowed down behind them, not wanting to get too close to whatever was going down. Eventually they did get the vehicle stopped, and traffic on the highway came to a grinding halt while they tried to get things sorted out. State and local police officers with AR-15’s and a K-9 unit swarmed around the Cadillac. 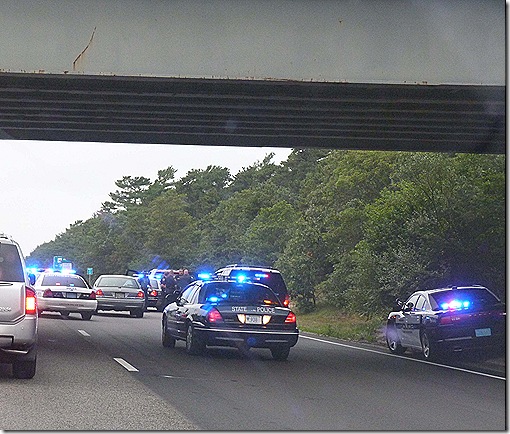 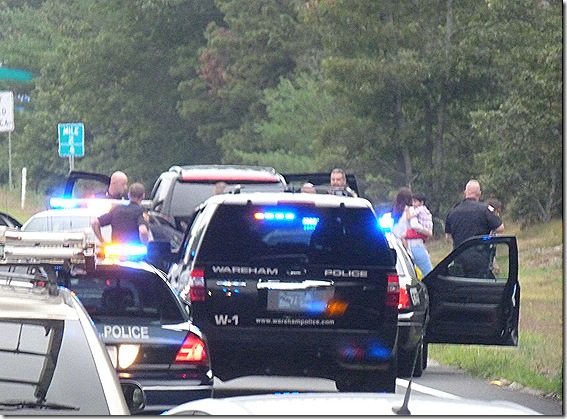 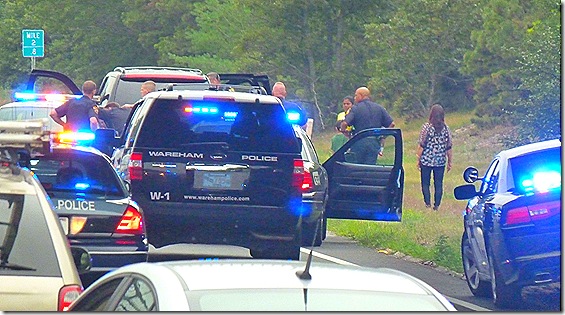 When they started getting traffic moving again, routing us into one lane to get past them, it looked like several women and a bunch of kids. Nobody was in handcuffs and the cops all seemed relaxed by then, so we don’t know what was going on. I really do think that whatever originally got the first officer’s attention wasn’t that serious and that they just kept driving along in their own little world, so he called for backup, which is entirely reasonable.

We call these kind of people OPOPs, which stands for Only People On The Planet. You know the type – they go through life totally oblivious to anything and anybody around them.

Soon after we got home, the gloomy skies we had overhead all day long finally opened up and it began to rain. It’s supposed rain all day today but that’s okay because we planned to stay home anyhow. This is our last day at Gateway to Cape Cod Outdoor World Resort, and Monday we will be moving to the Sturbridge Village Outdoor World Resort, about 95 miles away. We’re not exactly sure they can accommodate a rig our size, since I was told that they only have a few big rig sites, so we’ll just have to wait and see how that plays out.

Thought For The Day – I love people who can make me laugh when I don’t even want to smile.

8 Responses to “Windmills And Artists, And Old Cars, Too!”