As I reported in yesterday’s blog, we dropped my iMac computer off at the Apple Store in Mishawaka on Friday afternoon and I was told that the repairs could take two to three weeks. But Daniel Davis, the repair tech, said he would do his best to expedite things. And expedite he did! At 11:30 AM yesterday, less than 19 hours after we dropped the computer off, I got a message that it was finished and ready to be picked up. Now that’s fast service! Thanks a lot, Daniel and the rest of the crew at the Apple Store, for your fast service.

As I said in the title pages of both of my Big Lake books, there is a body of water in the White Mountains of northern Arizona called Big Lake, but the town itself and the people who live there exist only in my mind.

When Terry and I left Arizona a few weeks ago, we drove by the turnoff to Big Lake, but missed getting a picture of the sign. I told Terry it would be neat to have, but there was no place to safely pull off the road to go back and get a picture. But as it turns out, there’s more than one Big Lake in the world!

Longtime Gypsy Journal readers Jim and Mary Gallivan sent me this picture of Mary standing front of the Big Lake trading post in Lechee, Arizona. We lived in Arizona for many years, but neither Terry nor I can find Lechee on any of our maps. We’ll have to do some research. 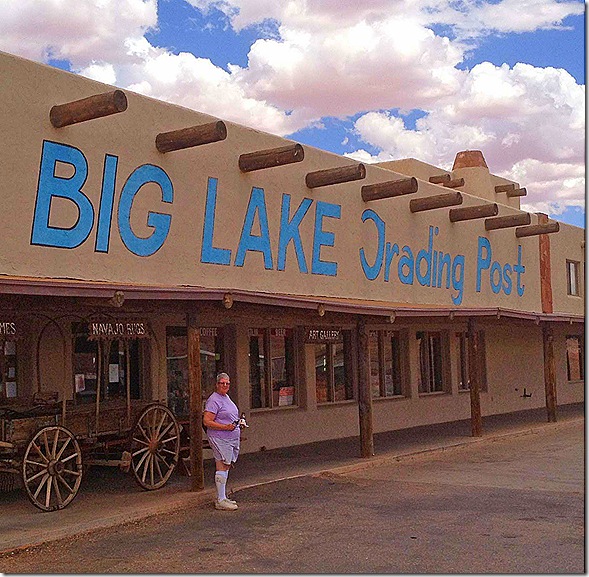 And Bob and Sandi Swanson sent me these photos, they took near Wasilla, Alaska. 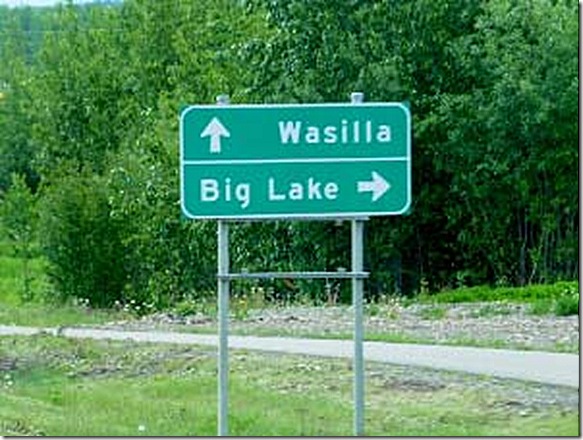 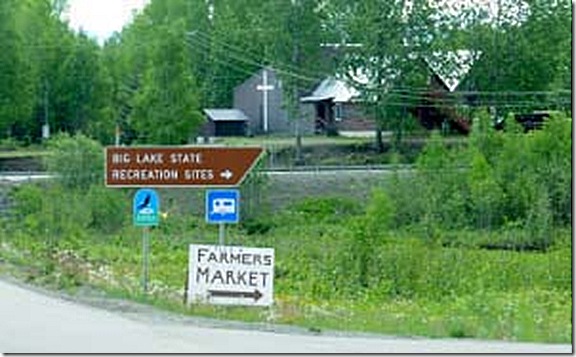 After we got home from the Apple Store yesterday afternoon, Bob and Bonnie Jae from New York came by for a visit. They have been spending a few days at Elkhart Campground before continuing their trip West in search of new adventures. We had a nice long visit, and then Al Hesselbart showed up to join the party. Like I said before, stay at Elkhart Campground long enough and everybody who’s ever owned RV will come by.

Al said that the power was back on his house but that he was going to spend another night here in his motorhome. He also said he was going to go out and have dinner someplace, and as he was driving out, I stopped him and invited us along. Boy, talk about chutzpah! And not only did I add us to Al’s dinner plans, after we had a wonderful meal at King Wah, he even picked up the check! Life doesn’t get much better than that.

I got an e-mail from someone yesterday asking about our Ohio Gypsy Journal rally, telling me that he wanted to come but somebody told him the rally was only open to people with motorhomes. I wrote back and told them our rallies are open to anybody, regardless of what kind of rig they come in, or anything else. About the only thing we discriminate against are yapping little dogs. He immediately replied and asked me if I was sure, because that’s not what he was told. Yeah I’m sure. It’s my sandbox and I make the rules.

It’s been quite a while since I have posted a Bad Nick Blog and everybody has asked me what happened to the chubby little curmudgeon. Basically, there are just not enough hours in the day. I have a lot of fun with Bad Nick, but it comes down to simple economics. I can write a Bad Nick blog post and if I’m really lucky, enough people will click on the little ad links in the blogs that I’ll make $10 or $15. And then the next day or the next week I have to do it all over again. Or, I can use that time to write a chapter in a book and if I do that a few times I have got a brand-new book to publish that will make me a lot more money over a much longer period of time. But that being said, yesterday I posted a new Bad Nick Blog titled How Come….? Check it out and leave a comment.

Thought For The Day – Sometimes things pop into my head and then jump feet first out of my mouth.

6 Responses to “They Found Big Lake!”