Nick's Blog » The City That Lit The World

We spent yesterday exploring historic New Bedford, Massachusetts, known as “the city that lit the world.” For over 100 years, ships from New Bedford dominated the whaling industry worldwide, the oil they harvested from the giants of the deep used to light lamps and lubricate sensitive equipment around the globe.

We started our visit with a trip to the National Park Service Visitor Center, where we watched a video on New Bedford whaling and looked at the exhibits on display there. A block south, toward the waterfront, we stopped at the Seamen’s Bethel, the chapel where sailors went to pray for safe passage and a prosperous voyage. Herman Melville wrote about the chapel in his classic book about whaling, Moby Dick. 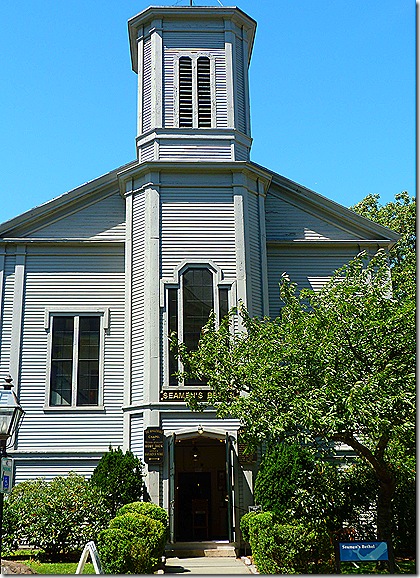 Next door to the Seamen’s Bethel is the Mariners’ Home, which provided shelter for sailors when they were in port. Built in 1787, the building still serves sailors to this day. 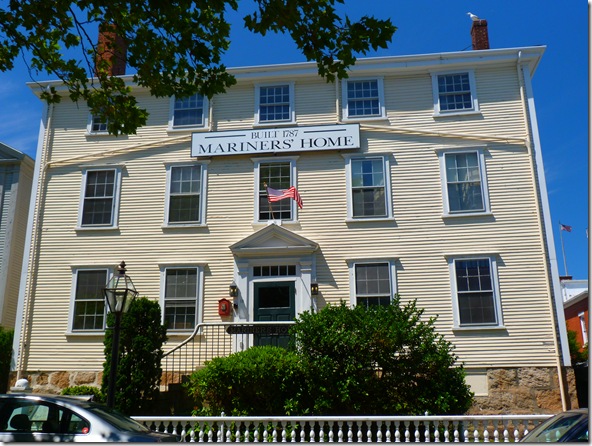 The centerpiece of the town is the New Bedford Whaling Museum, which houses an amazing collection of artifacts, artwork, and information on the days when New Bedford’s ships sailed to every corner of the world in search of whales.

The first thing that caught our eye when we entered the museum were three huge skeletons of whales hanging from the ceiling in the lobby. One was a female with an unborn calf. There was no way to take a photograph that shows just how big these amazing creatures were. 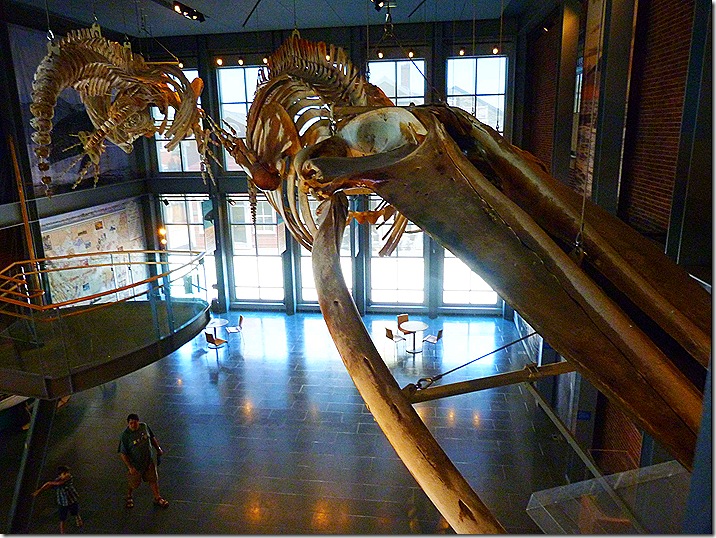 There were three videos playing in the museum’s theater, explaining different aspects of the whaling industry and life aboard a whaling ship.

While whaling seems a cruel occupation in today’s world, in the late 1700s and the early 1800s, it was an important industry, and New Bedford became one of the richest cities in the United States. It was hard and dangerous work, and while ship owners and their captains often became wealthy, common sailors eked out a meager living at best. With voyages that lasted years, much of the sailors’ time was spent keeping their ship in working order. They usually weren’t paid for that labor, only receiving a percentage of the profits from the trip. By the time he reimbursed the company for his food, clothing, tobacco and other necessities used during a voyage, which could easily last four years or more, many sailors found themselves in debt and had to ship out again in hopes of a better return on the next voyage. For others, once was enough, and they found easier and safer work ashore.

One of the most impressive things on display in a museum is the half scale model of the Lagoda, a typical New Bedford whaling bark that spent nearly 50 years working the sea. 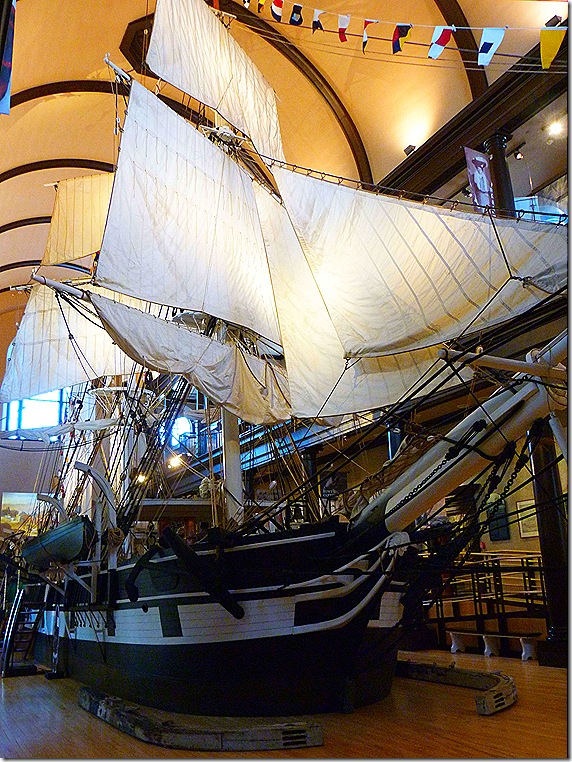 There was a large collection of evil looking harpoons used in whale hunting, as well as harpoon guns and other tools of the trade. 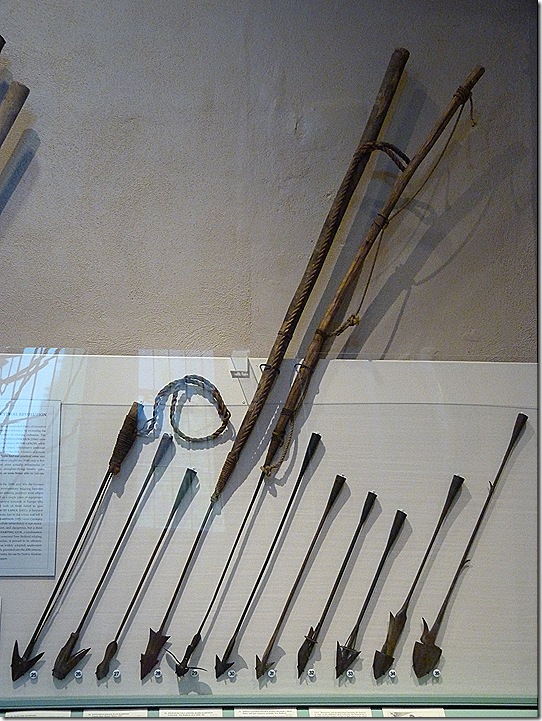 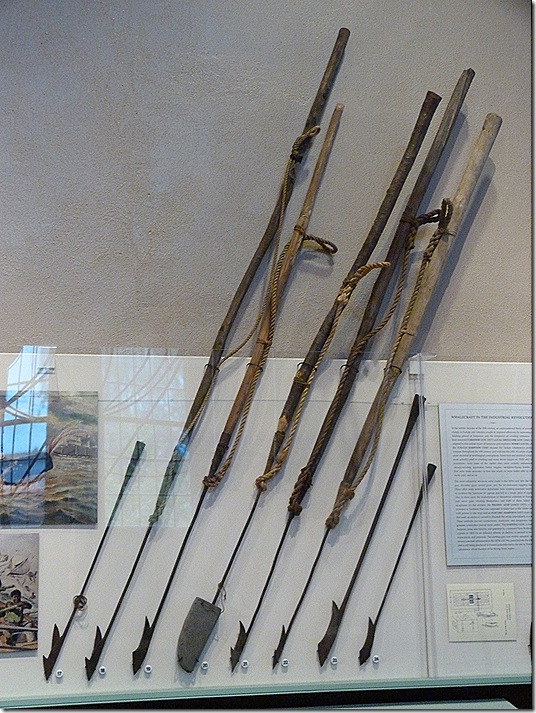 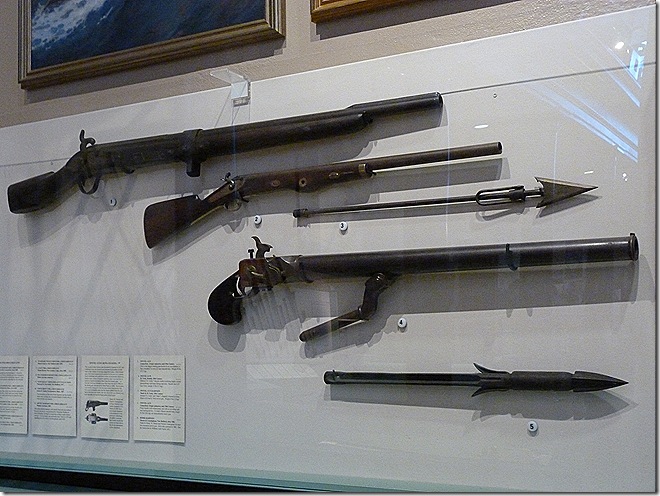 When not at work, sailors occupied themselves reading, playing music, writing letters home, and creating highly detailed scrimshaw carvings on whale teeth and bones. The museum has an amazing collection of scrimshaw on display. 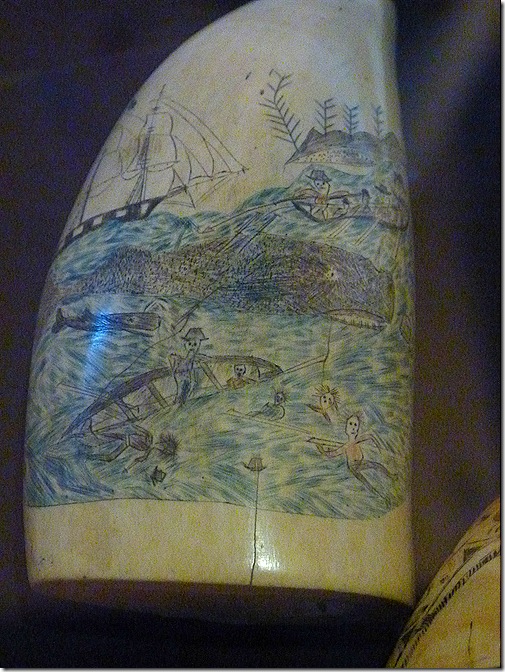 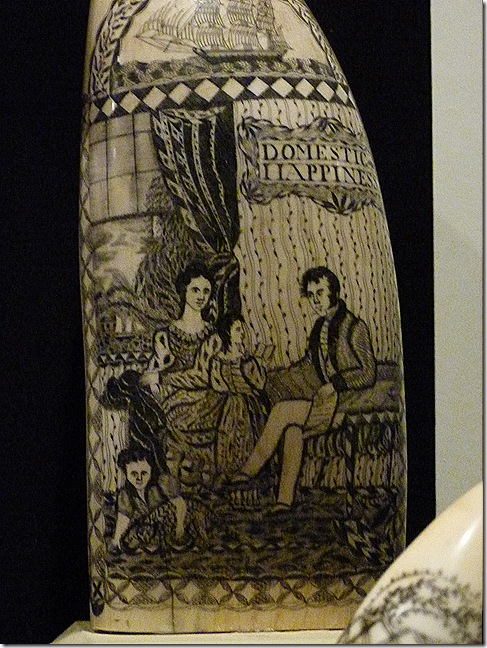 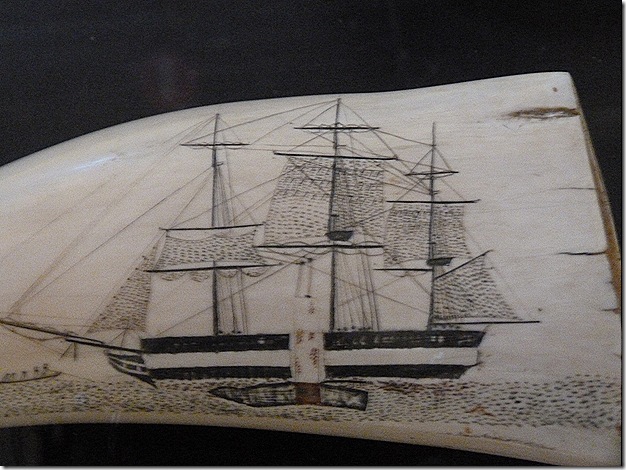 There are also displays of the many things made from whale bone, including corset stays, tools, and even musical instruments. There was an impressive collection of walking sticks made of or with whalebone heads, and Miss Terry was fascinated with the yarn swifts, which were used to wind yarn after it was spun. 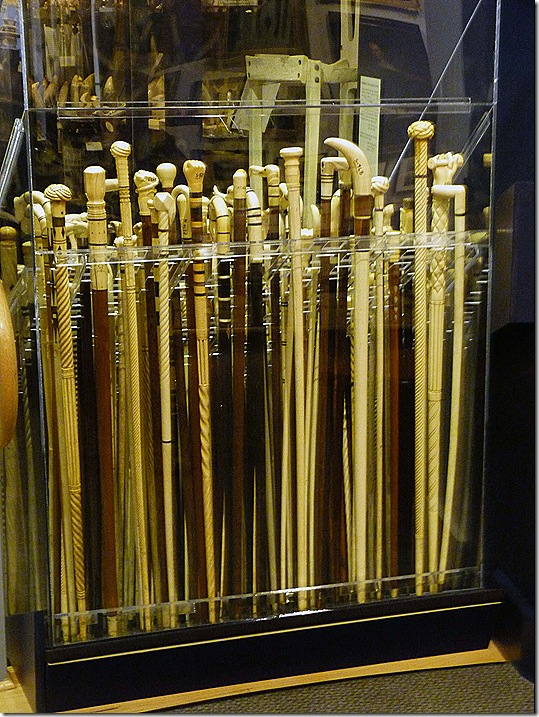 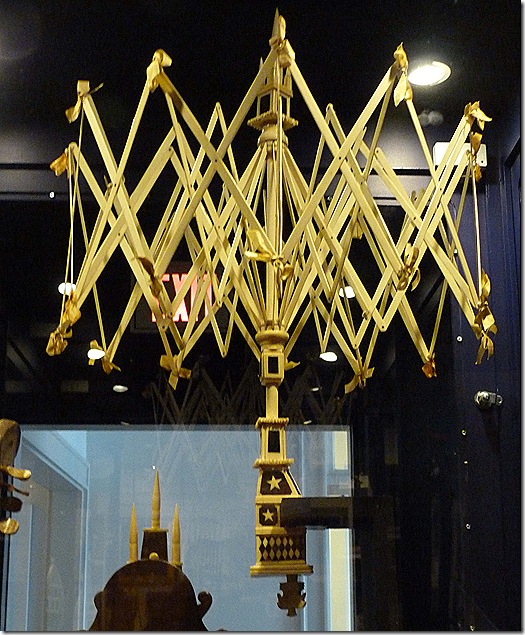 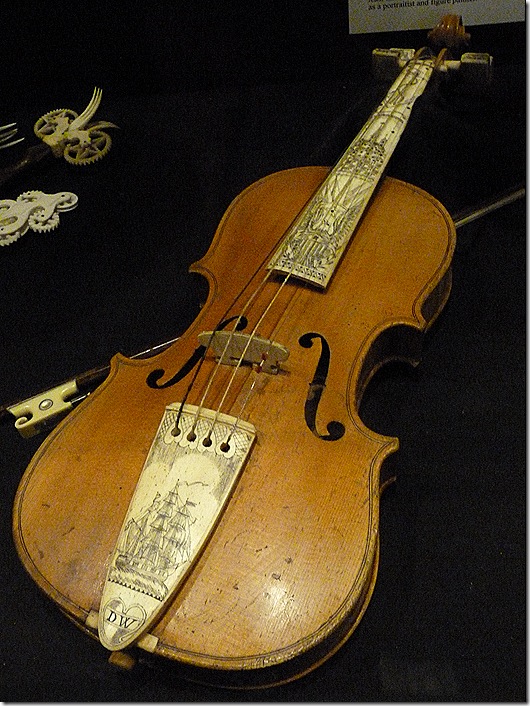 After our tour of the Whaling Museum, we walked back to the National Park Service Visitor Center to take their free walking tour of the city. But outside, we encountered two time travelers, a couple of ladies from 1862 who told us they had been transported to the present day. We had such a good time visiting with them and they were so interesting that we decided to skip the tour and just talk to them for a while. They invited us to play croquet with them, but we passed because I have a suspicion they were like a couple of pool hustlers I’ve met in my life and I suspected I was out of my league. 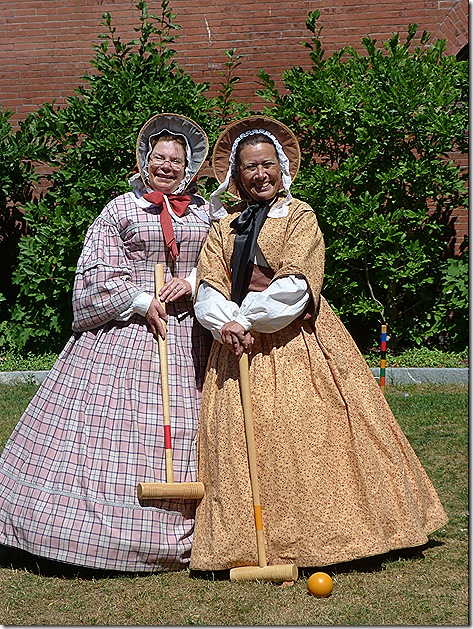 Many of the ship owners and captains built beautiful homes on the hill several blocks from the waterfront in New Bedford,  and we spent some time driving around admiring the impressive old buildings. While Texas oil may be called black gold today, it was obvious that whale oil was the liquid gold of its time. 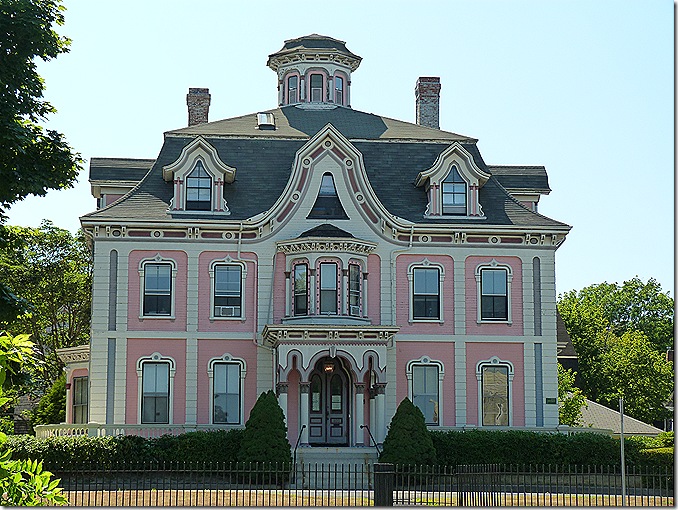 We had a wonderful day in New Bedford and came away with more memories that we will cherish forever.

Today we plan to explore Cape Cod, so hopefully we will be able to get up early enough to have a good day playing tourist. It’s a lot of fun, but it can be hard work too!

One Response to “The City That Lit The World”