Given some of our experiences with weekend campers, we kind of expected to be kept awake Friday night with a lot of noise from all the kids at Pope Haven Campground in Randolph, New York. But we were wrong. By about 10:30 PM everything was pretty quiet and we had a very good night’s sleep.

Though it was a good night’s sleep, it wasn’t a long enough one for us. We were awake by 8 the next morning and spent some time reading e-mail and responding to a number of them, and pulled out about 10:15. We got back on Interstate 86 and headed east, with a goal of making it to the Elks Lodge in Cobleskill, New York. That was about 300 miles away and should be an easy drive.

About the time we entered the Seneca Indian Reservation, the highway went from pretty good to absolutely horrific, and stayed that way for the next 30 or so miles. For all you people who complain about Interstate 10 in Louisiana, trust me, you have absolutely no idea what you’re talking about. We’re in our fourteenth year as fulltime RVers, and we have racked up a whole lot of miles in that time. In all those years on the road, and all those miles, I have never driven a patch of highway as rough as that one yesterday. I’m talking bone shaking, teeth rattling pavement that threatened to shake our motorhome into pieces. At one point Terry asked me if our airbags had all deflated at the same time.

Eventually we reached a smoother road surface, although there were still some pretty bumpy stretches long way. In spite of the rough stretches  of highway, the countryside we were passing through was absolutely beautiful, with lots of greenery, quaint small towns, and neat farms in the valleys. 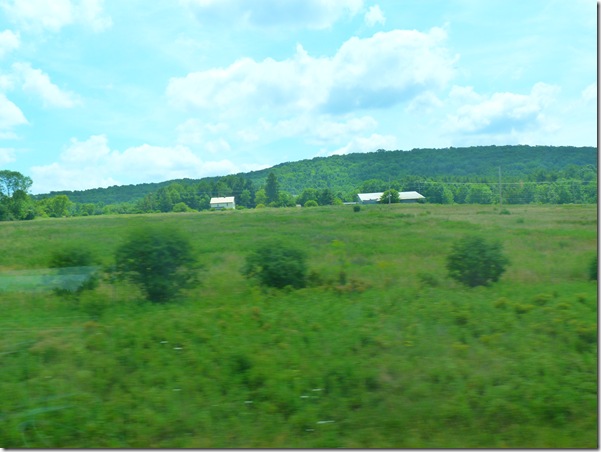 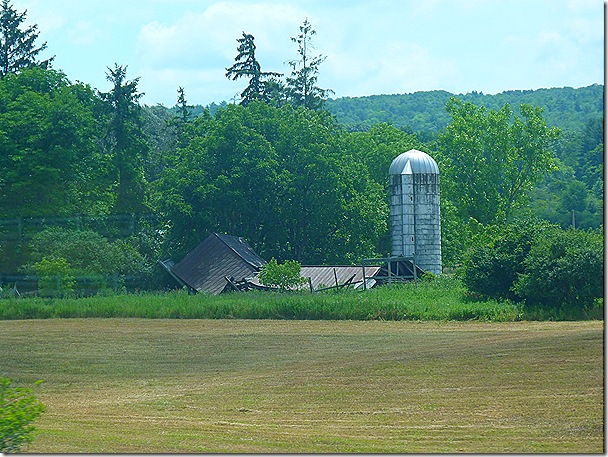 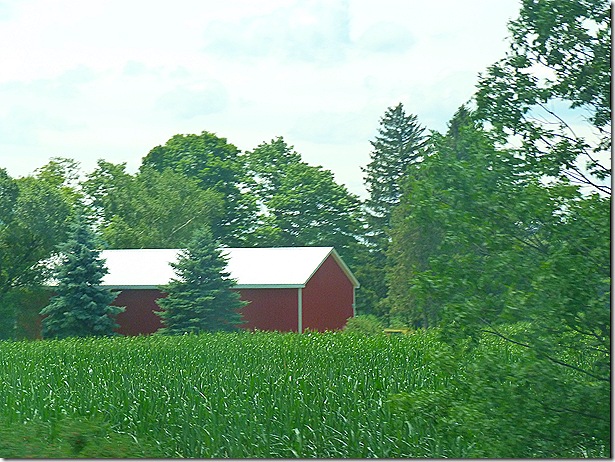 My friend Joe Kieva, longtime RV author and seminar presenter, told me recently that what the folks in the Eastern part of the United States call mountains, people in the West call hills. But the flipside of that coin, Joe said, is that what people who live out West call rivers and lakes are considered mere streams and ponds by Easterners. And we saw plenty of hills and plenty of ponds and streams along the way. 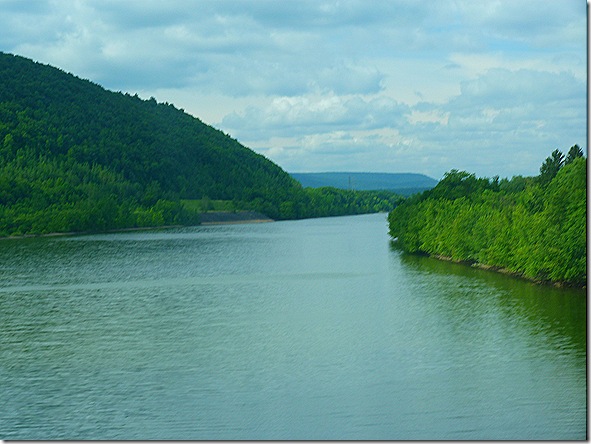 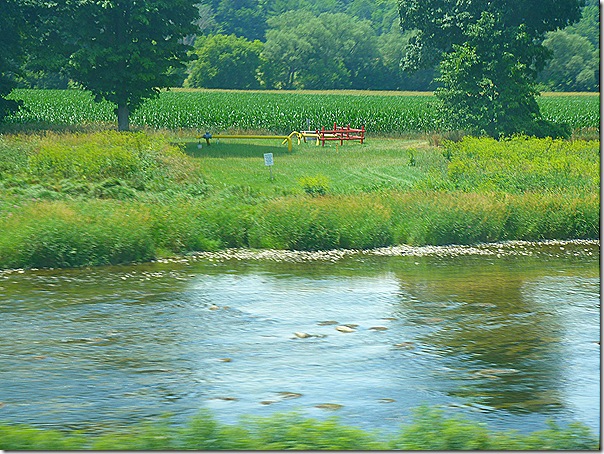 I had tried to call the Cobleskill Elks Lodge several times to confirm that they did allow overnight parking as the guidebook says, and that they had room for us to spend the night, but I never did get an answer, and the closer we got, the more apprehensive we became, especially after our experience the night before at the Erie, Pennsylvania lodge. Once burned, twice shy.

We pulled into a rest area for a potty break and I checked the Elks Lodge camping guidebook, and found a lodge in Ludlow, Massachusetts that listed RV parking. That would add about 130 miles to our day’s drive, but it was still early and we were enjoying the ride, so I asked Terry to call them to see if they could accommodate us. Sure enough they could, so we stirred up the Jell-O and kept right on driving.

Eventually we made our way to Binghamton, where we turned north and hooked up with the New York Thruway for a while. That route took us over the Hudson River on a very high, very long bridge. Miss Terry said the view of the river below and the railroad bridge that parallels the highway bridge were great. I had to take her word for it until I could look at the pictures later, because it was all I could do to just keep driving and not snivel. Oh, who am I trying to kid? There was a lot of sniveling going on! 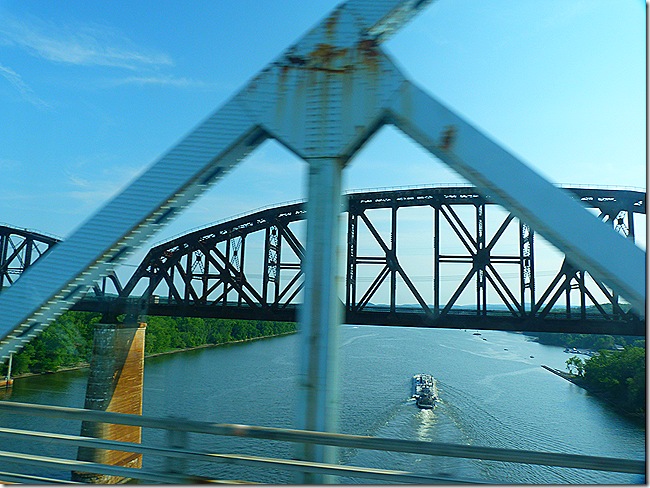 Terry is very good about reassuring me and talking me through tight construction zones and over bridges. But for some reason, she does like to take my picture when I’m doing those kind of things. She keeps them in a book she calls the Pucker Factor Portfolio. 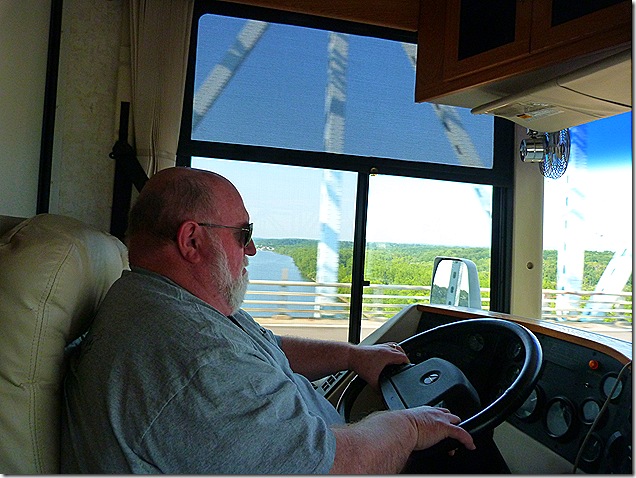 We crossed into Massachusetts and got on their Turnpike and continued heading east. I thought about what Joe Kieva said about hills and mountains when we came to a sign that warned of a steep descent for six miles and advised truckers to shift to lower gears and test their brakes. There was even a runaway truck ramp partway down. 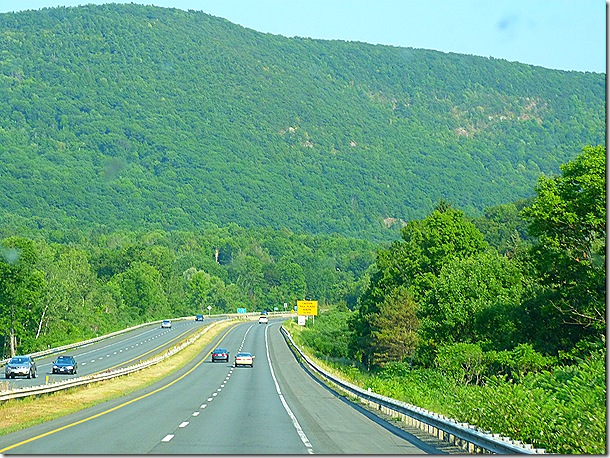 Obviously, folks around here have never driven Interstate 17 from Flagstaff, Arizona to the Verde Valley, or Interstate 70 across Colorado, or a dozen other high descents that we have been on. I would rate this one at possibly 6% for a very, very short section, and the rest of it was maybe 4% grade. I just took my foot off the throttle and let our exhaust brake hold us back and never had to touch the brake pedal.

When Terry called the Elks Lodge, they had told her that there was a wedding reception going on in their outdoor pavilion, but not to worry, there was plenty of room. She asked the person she spoke to if she was sure and she told her she guaranteed there would be more than enough room for us. We arrived about 6:30 PM and there were a lot of people at the party, but we got parked and hooked up to 20 amp electric with no problems. The crowd seemed to be having a good time, and it was obvious their alcohol consumption had been going quite well. But everybody was friendly, and the groom came over twice to talk to us as we were getting plugged in and our slide rooms out. They were gone by about 10 PM and we had the place to ourselves. 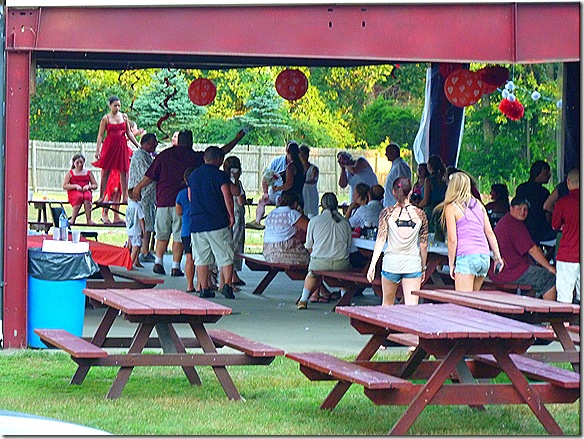 The Lodge manager told us we were welcome to stay as long as we wanted to, and since we had made such good time and were not scheduled to go into Gateway to Cape Cod campground until Monday, I told him we just might take him up on that. But then I called the campground and asked if we could arrive a day early, and they said that was no problem. It’s about 115 miles from here to there, so that’s what we’ll do today.

It was another long day of traveling, 432 miles to be exact. And yes, I know that is more than I said we would do, and more than I advise most of our readers to do. But what can I say? Sometimes you get out here on the road and it’s just too much fun to stop.

Thought For The Day – I am a man of many flaws stitched together by good intentions.

8 Responses to “Once Burned, Twice Shy”