We wanted to get an early start yesterday, so we were up by 7:30 AM and getting ready to hit the road. Since the RV sites at the Gateway to Cape Cod Outdoor World Resort were pretty tight, we were a little concerned about being able to get out and past the heavy duty pickup belonging to the folks with the fifth wheel trailer next door. But with Miss Terry guiding me, it was a piece of cake.

We left the campground about 9:30 AM and took Interstate 495 northbound about 59 miles to the Massachusetts Turnpike. Since our whole trip was only 95 miles, we expected it to be a pretty easy run. We should’ve known better.

About five miles before we reached the turnpike, traffic came to a screeching halt and we spent 20 minutes waiting for a wreck ahead of us to be cleared. That was the second time in a couple of days that we have run into a major roadblock five miles from where we needed to be. I told Terry that from now on I’m going to stay at least six miles from wherever we’re going so we will get there on time. 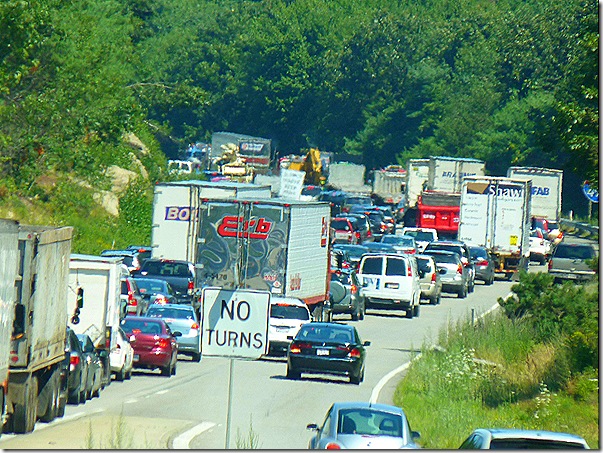 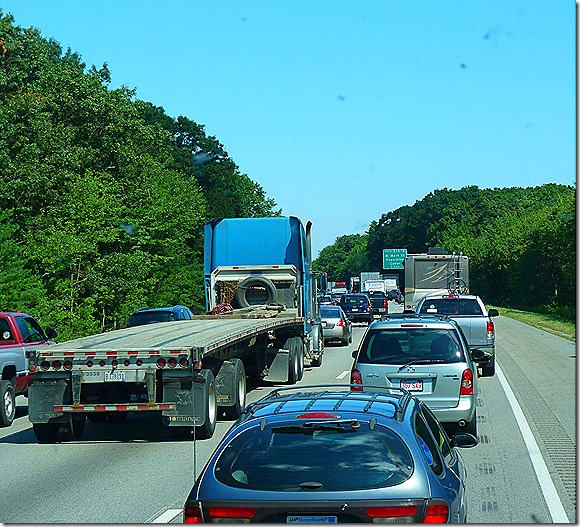 After we did get on the turnpike it was about 37 miles until we hooked up with Interstate 84, and another three or four miles until we got off on the west side of Sturbridge.

Several people had told me that the Sturbridge Outdoor World Resort was pretty tight and that we might not be able to find a space big enough to accommodate our 40 foot motorhome. They were being generous when they told me that. This place is tighter than a miser’s wallet! Compared to here, Gateway to Cape Cod is a country estate.

The first site we tried left the front end of our motorhome sticking out about two feet into the roadway and the back end no more than six inches from the motorhome in the site behind us. There wasn’t much to choose from, but we decided to look around and see what else we could come up with. And down at the end of the row we found another site we could back into with a little more room to spare, although I can probably reach out the window and scratch the backs of the folks in the fifth wheel parked next to us. And there is no place to park our Explorer nearby, it’s a couple rows away parked off the side of the road. We’re not sitting as unlevel as this picture makes it seem. 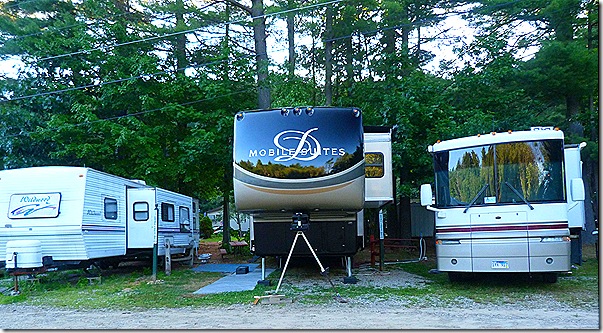 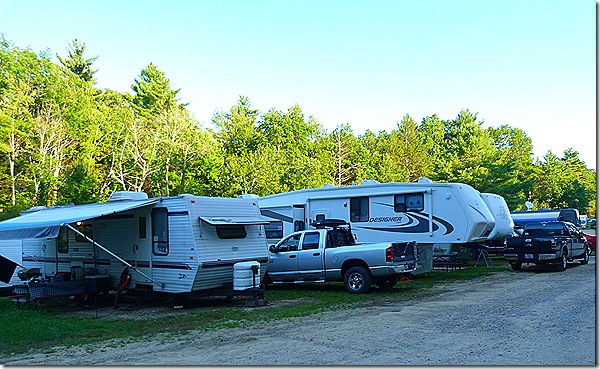 But we have full hookups with 50 amp electric. What we don’t have is any TV reception on our satellite dish, and some of the flakiest Internet service we’ve dealt with anywhere. Our 3G Verizon air card is absolutely worthless here, and the 4G MiFi ranges from being strong and fast to disappearing completely and then coming back for a while, before it vanishes again. I was able to tether my computer to my Droid Razr Maxx, and Terry made do as best she could with the Mifi.

In spite of the incredibly tight spaces and terrible satellite TV and Internet connections, what this campground has going for it is a super friendly staff. The manager and everybody else we’ve talked to have gone out of their way to make us feel welcome. The manager even drove by on her golf cart to be sure we had gotten parked okay.

By the time we were parked and hooked up we were both starving, so we decided to go into town and have an early dinner. Two or three people had recommended Enrico’s Pizza, and it has some very good reviews on Yelp, so that’s where we headed, only to discover that they are closed on Mondays. There was a yarn shop in the same strip mall and I told Terry to go check it out while I looked on Yelp and tried to find us someplace else to go. As it turned out, the yarn shop was closed on Mondays too!

I found another place on Yelp, a mile or so down the road, and we drove there. Guess what? They’re closed on Mondays too! So we drove back through town and just about every business we saw was closed. This at 3 PM on a Monday afternoon in a resort town in the summertime! I would think that since they have such a short season, the merchants and restaurant owners would be open every day they could to make hay while the sun shines. But what do I know?

Eventually we found ourselves in a shopping center that include WalMart, Staples, Applebee’s, and several other businesses. And they were all open! We stopped at Staples to look for something we needed and asked the checkout clerk and a woman in front of us in line which would be better, the Applebee’s or Uno Chicago Grill in the same plaza. We had never been to Uno, and didn’t know what they had to offer.

The clerk said Applebee’s, the woman said Uno, and her young  daughter also said Uno emphatically. Two out of three, but what does a kid know? Back out in the parking lot I saw a priest walking by with the collar and everything, so I asked him. I figure if a man of God can’t give you a straight answer, who can? But he said he wasn’t getting any divine inspiration and left me to my own devices. Thanks a lot, Father!

We decided on Uno and were glad we did. They are part of a chain that we had never heard of, which originated in Chicago, and we were very pleased. The service was fast and friendly, and the food was delicious, with very large servings neither of us could finish. I had the chicken parmesan over penne pasta and Terry had baked haddock, which came with broccoli and a farro salad. They also give a 10% discount to active duty military and veterans. Our bill, with soda and iced tea, came to $28.47 after the veterans discount. We were very impressed and will definitely go back again.

We’ve got a lot to cram into a few days, so it’s going to be a busy week for us. I’ll do my best, but if for some reason you don’t see a blog at the normal time every morning, it doesn’t mean we have fallen off the face of the earth or were eaten by rabid chipmunks. It just means the flaky Internet isn’t working again.

Thought For The Day – A kind word can keep someone warm for years.