It cooled down a bit yesterday, from bloody miserable to just very hot. It was 86o, which was almost twenty degrees lower than what we’ve been experiencing for over a week here at Elkhart Campground. The rest of the week is supposed to be in the mid-80s, which everybody has been looking forward to. Yeah, you know things are rough when we all “look forward” to that kind of heat.

The rear view mirror on the driver’s side of our motorhome recently started vibrating a lot, and when we tried to tighten one of the screws holding it in place we discovered that the screw had sheared off. By the time we got to Elkhart a couple of weeks ago, it was really moving around a lot.

Our friend Charles Yust offered to take a look at it, and we took advantage of the cooler weather yesterday to check it out. The original plan was to drill out the old screw and replace it, but further investigation revealed that three out of the four screws holding the mirror in place had broken. It’s a wonder it didn’t fall off! Rather than fight with trying to drill out three broken screws, Charles moved the mirror up a half inch or so and remounted it with new stainless steel screws, after first caulking the original screw holes. When the job was finished, the mirror covers the old holes and it is rock solid. Thanks Charles!

Today Charles and Chris are leaving for Wapakoneta, Ohio to be vendors at the Ohio Good Sam rally. We’ve had fun hanging out with them while they’ve been here, and look forward to seeing them again in a few weeks.

Can you stand yet another Big Lake picture? Here is one that Jim and Nancy Tidball took on the Upper Peninsula of Michigan. Gee, I wonder how many Big Lakes there are. Keep sending those pictures when you spot a new one. 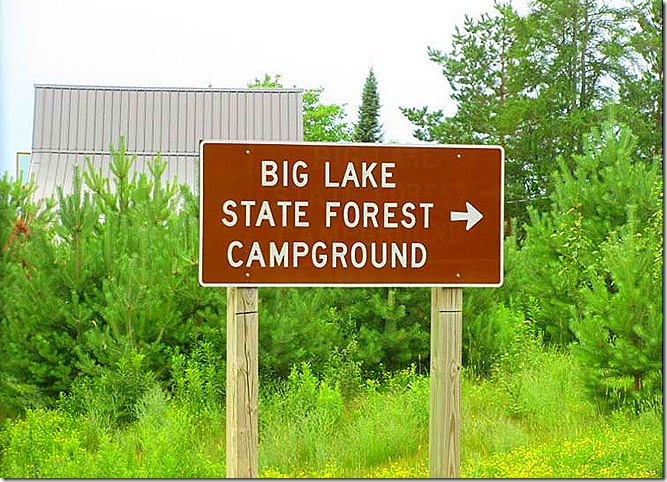 This is also our last week in Elkhart. We plan to leave at the end of the week for Massachusetts, where we’ll spend a month playing tourist and gathering stories for the Gypsy Journal. There is so much history in that part of the world that I’m looking forward to getting up there. It’s a part of the country we haven’t spent much time in during our years on the road.

Between now and then we have some things we want to get done, but nothing pressing. I’ve been getting a lot done on my next Big Lake book and I think I can see the light at the end of the tunnel. I also promised to proofread a book for a friend, and will try to get that done so that project can move forward. Miss Terry has been making headway with her circular sock machine, and though she has had some very frustrating times with it, she is moving forward. I wonder how much we can get done in a week’s time?

2 Responses to “Looking Forward To Hot”