America’s favorite sheriff, Andy Griffith, died yesterday at his home on Roanoke Island, North Carolina, and America is a little bit poorer today. No matter if you grew up in a big city, a small town, or were raised on a farm, is there anyone among us who didn’t feel like we were all at least part time residents of Mayberry? I know I did, and the entire cast of the Andy Griffith Show seemed like part of my extended family.

It was common belief that the slow paced fictional town of Mayberry was based upon Andy Griffith’s hometown of Mount Airy, North Carolina, which has embraced its favorite son with a museum, the Andy Griffith Playhouse musical venue, several stores and shops that recreate Mayberry businesses, and the annual Mayberry Days Festival in September. We visited Mount Airy a while back and found it to be a charming small town.

A statue of Sheriff Taylor and his son Opie stands outside the Playhouse. 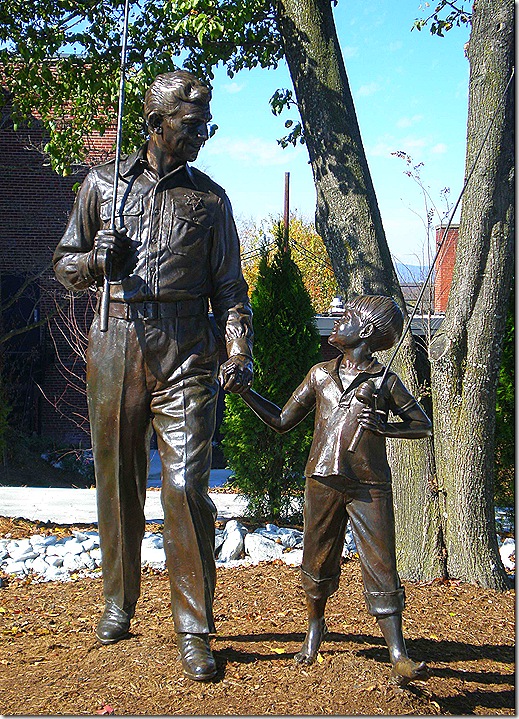 Mount Airy’s Main Street is a lot busier than when Andy and Barney Fife patrolled the town, but they are still cutting hair at Floyd’s City Barber Shop, as they have for over 65 years. The walls of the barber shop are lined with over 20,000 pictures of regular folks and celebrities who have sat in the old barber chair where Andy Griffith himself once got his haircuts, including Lou Ferrigno of Incredible Hulk fame, George Lindsey who played Goober on the Andy Griffith Show, and talk show host Oprah Winfrey. Look carefully, and you may find my picture on the Wall of Fame, too. 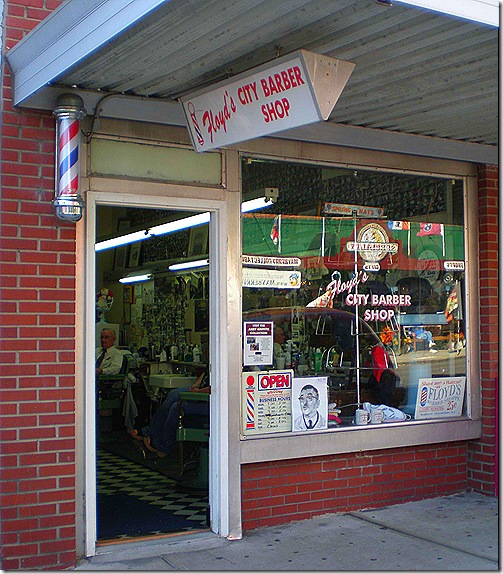 Next door to the barber shop, you can have a delicious pork chop sandwich at the Snappy Diner, which Sheriff Andy Taylor referred to in the television show. But go early, because they close in mid-afternoon! 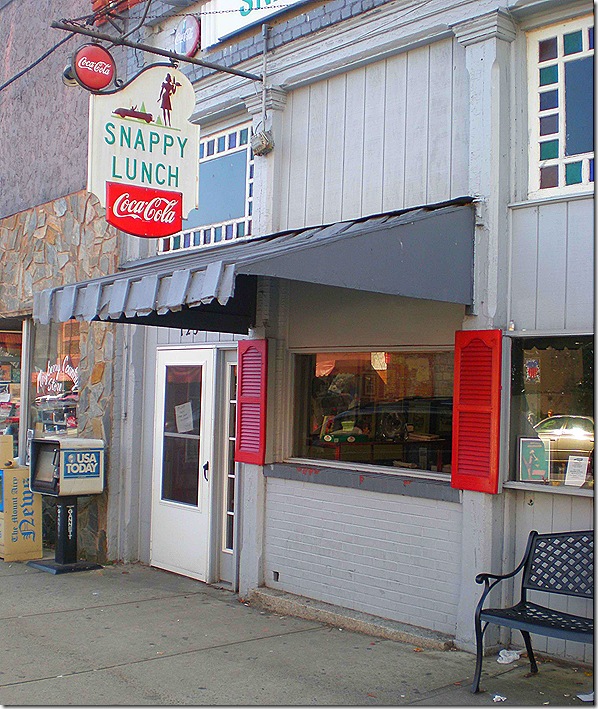 At Wally’s Service Station, you can book a tour of the town in a police car that looks like the one Sheriff Taylor drove. 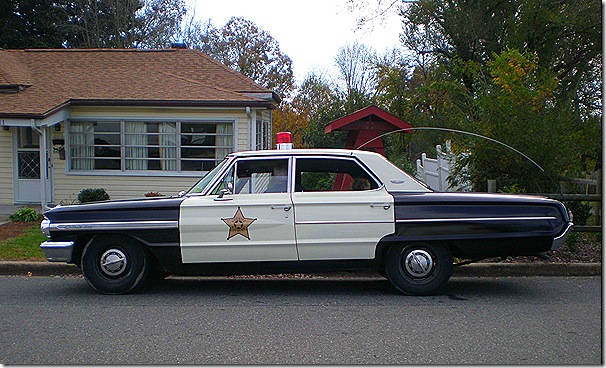 The station is an original service station built in 1937 and operated as a Gulf station, and then later became a Standard Oil and Esso station until the mid 1980s. Today the restored gas station is a souvenir shop offering all kinds of goodies to commemorate your visit to Mayberry. If your feet are tired from exploring, you can buy an RC Cola and a Moon Pie and sit in a rocking chair on the front porch for a while, just soaking up the Mayberry atmosphere. 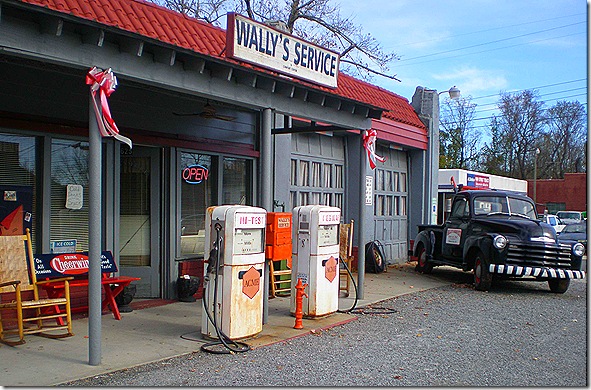 Next door, at the Mayberry Courthouse, they have a replica of Sheriff Taylor’s office, complete with the jail cell where town drunk Otis slept off his binges. This was Mount Airy’s real jail for many years and served as Mount Airy’s Municipal Building, which housed many city offices and the Mount Airy Police Department. As with most Mayberry attractions, admission is free. 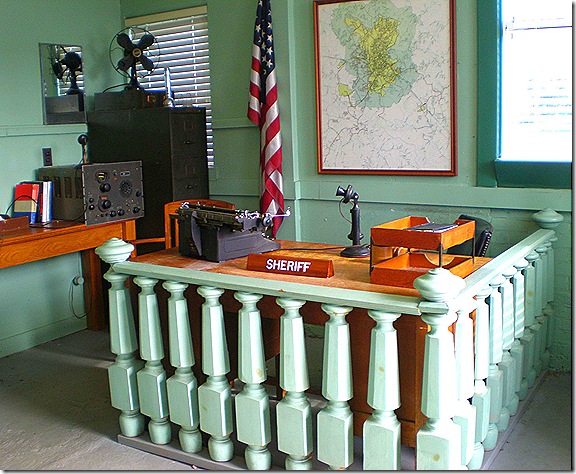 Yeah, that’s me in jail. I hope Otis doesn’t snore. 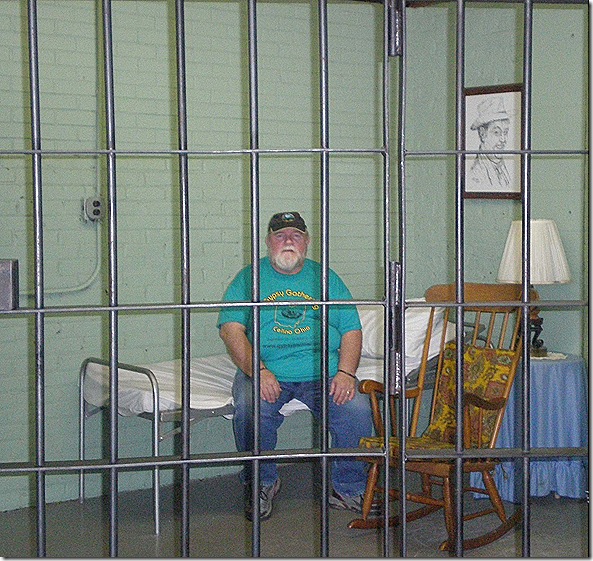 A few blocks away, the small house where Andy Griffith lived as a boy, until his high school graduation, is now a bed and breakfast, decorated with antiques from the 1930s and 1940s, including some original Andy Griffith memorabilia. 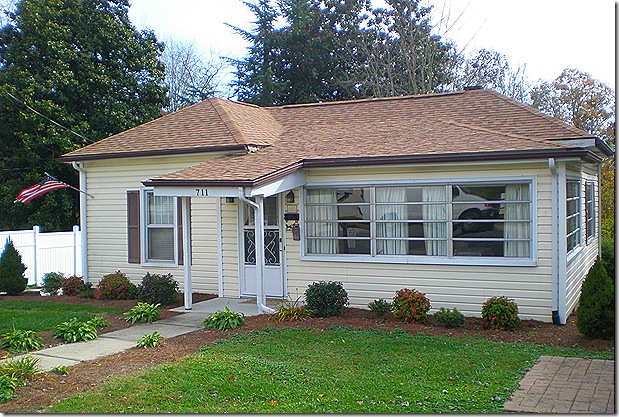 The late Frances Bavier, who played Aunt Bee in the Andy Griffith Show, has a room dedicated to her memory at the Mayberry Motor Inn, located off of the Highway 52 Bypass. The room has a twin bedroom suite, which was a personal possession of Bavier, as well as other items that belonged to the actress, including gloves, eyeglasses, a handkerchief, a dress, a hat, a shoe kit, an attaché case, and sewing materials.

Andy Griffith was a mortal man, but the character he created will live on forever in Mayberry, where life goes on just like it has for over 50 years. I think I’ll find a rerun of the Andy Griffith Show and pay a visit to Mayberry. I can’t think of a better way to celebrate America’s birthday than spending some time in America’s quintessential hometown. Rest in peace, Andy.

Thought For The Day – Husbands, never ridicule your wife’s choices. You were one of them.