I’m not normally a superstitious man. Black cats crossing my path don’t bother me, I don’t carry a four-leaf clover or a rabbit’s foot for good luck, and I’d much rather walk under a ladder than climb the darned thing. But all that being said, yesterday was definitely Friday the 13th.

We left Elkhart Campground about 11 a.m. and took the Indiana Toll Road east toward Ohio. We planned to drive about 350 miles to the Elks Lodge in Erie, Pennsylvania, where we would spend the night.

About the time we went through the toll booth, I realized that my Silverleaf engine monitor wasn’t working, and I really depend on it to keep track of our engine and transmission when traveling. A few miles down the road there was a truck parking area, and we pulled in to check it out. I exited the program and restarted it, which didn’t help. Then I rebooted the netbook computer, but still no luck. I unplugged the data cable to no avail, and Terry checked under the dash to see if it had pulled loose there. No, nothing worked. So I whined, sniveled and cussed at it, and even that didn’t work (you’d be surprised at how often that does work!). Finally I resigned myself to the fact that it was dead and started to get back on the highway, when Miss Terry noticed that I had it plugged into the Ethernet port on the computer instead of the USB port. She switched it to the right port, and it worked. Well duh! I have no idea how I moved the darn thing to begin with, since I never move the computer or unplug it.

With that issue resolved, we continued our trip and crossed into Ohio, where much of the road was even worse than in Indiana. What the hell do they spend all of those turnpike tolls on anyway? Because it’s darned sure not maintenance!

We passed a lot of parched farmland in Indiana, but when we got to Ohio it immediately seemed much greener and more vibrant. 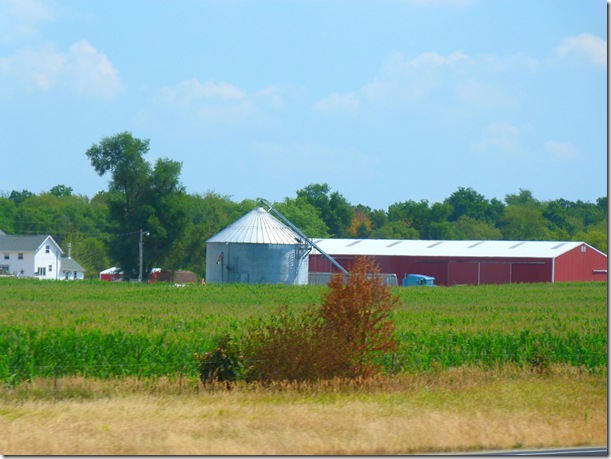 I waved at Toledo as we drove past, since I was born there, but nobody waved back. Somewhere east of Norwalk, I asked Terry if we had picked up our laminated wooden jack pads when we left Elkhart Campground, because I couldn’t remember doing so. Terry couldn’t remember if we had even put them down this time, so we called our friend Merle Gautsche, a neighbor at the campground, and asked him to check. Merle called back a few minutes later and said sure enough, they were right where we left them. He said he’d keep them until we return in a month or so. Just like the Silverleaf cable, I have no idea how we missed that. We never forget our jack pads! Well, at least until yesterday, we never had.

Okay, that problem’s fixed. What’s next? About five minutes later a bird flew into our windshield with a loud wallop. We were sure it broke the glass, but it held. That is more than I can say for our bladders! What’s with the darned bird strikes anyway? I started driving when I was 16, and until a couple of years ago, I never had a bird hit my vehicle. But this must be the fourth or fifth time that it’s happened now. In fact, last year we were parked at the fairgrounds in Yuma when a bird smashed into the passenger side window of the Winnebago and literally exploded. I feel like I’m living in an Alfred Hitchcock movie.

Interstate 90 split off from the Ohio Turnpike just west of Cleveland, and we followed it through town. Traffic was moderately heavy, but moved right along, except for a couple of sharp turns that slowed everybody down. 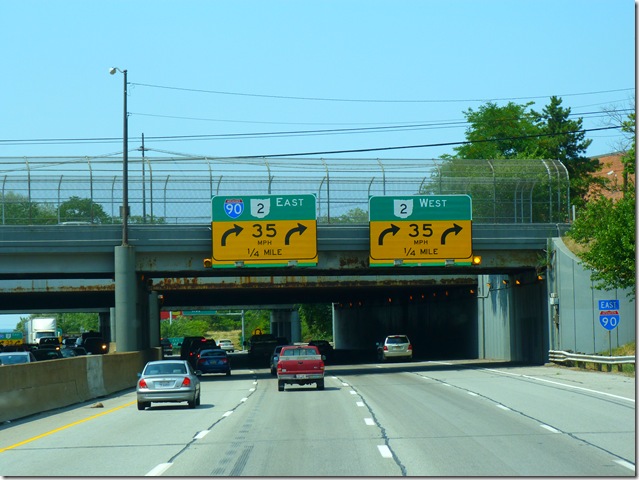 Terry got a couple of pictures of the city skyline and Progressive Field, home of the Cleveland Indians baseball team. 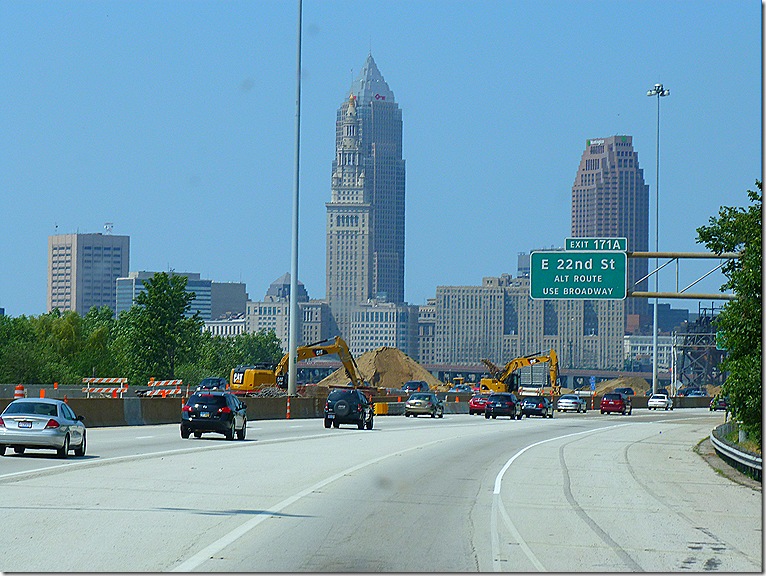 Thursday afternoon I had called the Elks Lodge in Erie to confirm that they had RV parking and that it would not be a problem for us to stop for the night. The lady in the office assured me it would be fine and said they had plenty of room. So when we got to Erie we drove about five miles to the lodge, and promptly missed the driveway entrance because it was hidden behind a beauty shop sign. We wound our way around a few blocks and pulled into a store parking lot, where I went inside and asked if we could leave the motorhome there long enough to go back in the Explorer and find out exactly where to turn to get to the Elks.

I’m glad we did, because when we arrived at the lodge, the parking lot was packed with cars. I went inside to ask about the RV parking and was told they had a special event going on, but that we could park on the grass next to the paved lot and run an electrical cord to one of the two 30 amp outlets they had. Well, we could have if the grass wasn’t covered with parked cars too! And nobody was parked neatly in rows; they were here there and everywhere in no order. It was hard enough to back the Explorer out, and we decided we’d go to Plan B. As soon as we figured out what Plan B was.

We went back to the RV, hooked the Explorer to the tow bar, and got back on Interstate 90, but not without first getting caught up in a construction zone detour down a very narrow, hilly road. What fun!

A few miles further east was a Pilot truck stop, so we pulled in to get fuel, hoping we might find a spot there to overnight. Terry went inside to pay, and her credit card as declined. Huh? She tried another card, and it too was declined! What the heck? Fortunately, we always carry a cash reserve just for emergencies, and she got some money and went back inside. That wasn’t declined.

I tried to call our credit union to find out what was wrong with the first credit card, but while I was dialing them, the security department from our bank called to inquire about an attempted charge on the second card Terry tried. Since our business address is in Nevada, and we were at a truck stop in Pennsylvania, and truck stops seem to always raise red flags, they declined the charge until they could confirm it was us. This is not the first time this had happened, and they are supposed to have a notation on our account that we travel all over the country, but I guess they figured better safe than sorry.

When I got off the phone with the bank, I called the credit union, and they had no record of the attempted charge, and said it must have been an error on the clerk’s part when she swiped the card. Whatever. And to top it all off, they had no room for RVs to park overnight, only trucks!

Back on the road again, we crossed into New York and a few miles later stopped at a Welcome Center to ask about overnighting there, since I had heard it was prohibited. Nobody was on duty, and when I called the customer service number, I got a lady in New York City who didn’t seem to even know what an RV was.

A few days earlier, one of our subscribers had e-mailed to tell me he lived just a mile or so off Interstate 86 at Exit 16, and had a 50 amp hookup if we wanted to stop. At that time I wasn’t sure what our schedule would be, but since we were close, I decided to see if I could get hold of him on such short notice. And wouldn’t you know it; I had lost his e-mail completely! And try as I might, I couldn’t remember his name. My brain just went into lockdown with everything else going on.

It was starting to get dark and we needed to get off the road. Terry found a Passport America campground at the same exit, and though they don’t honor the Passport rate during the summer or on weekends, the man on the phone said he’d give us an Escapees discount. Fine, let’s just get off the damn road and get parked.

The guidebook said the campground, Pope Haven, was about four miles off the highway. As it turns out, it was more like about seven miles down a very narrow country road. I wasn’t sure what we were getting ourselves into, but eventual we found the place, which is a typical weekend camper and seasonal place; lots of kids, lots of dogs, lots of smoky campfires. But everybody was friendly, and with 415 frustrating miles behind us, I was just glad to get parked, and to get Friday the 13th over with. 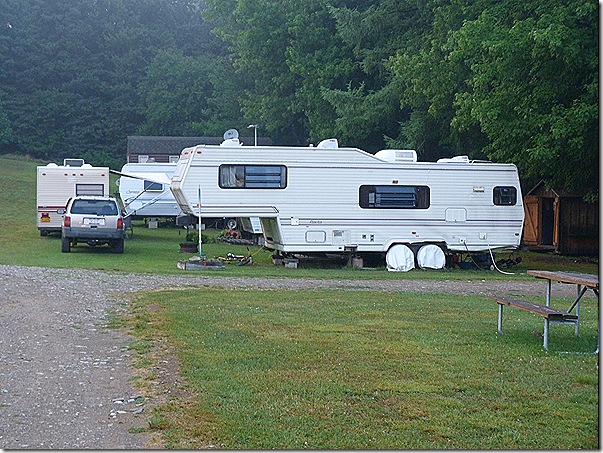 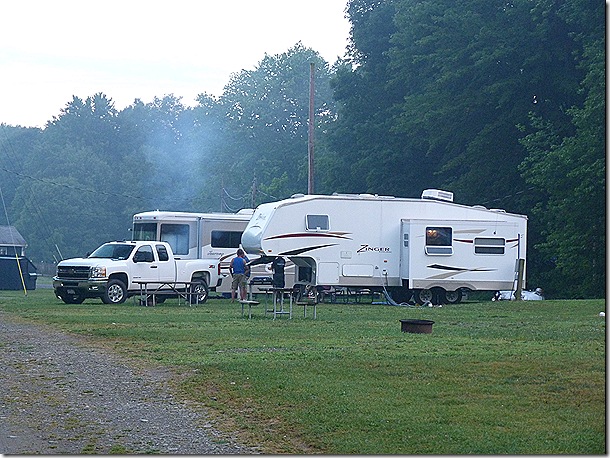 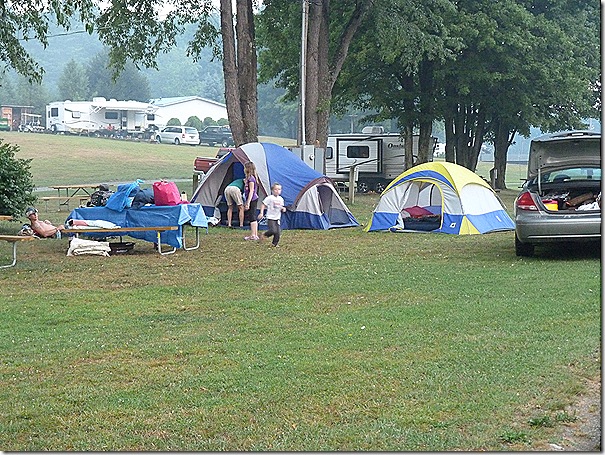 Today we’ll push on eastward. I’m aiming for Cobleskill, which is 300 miles and also has an Elks lodge that allows overnight RV parking. Where will we actually end up? Only time will tell.