Nick's Blog » Back Home In Elkhart

We were up and at it early again yesterday, so the Spartan Chassis tech could get started on our motorhome a little after 7 AM. Now I have to tell you something, you can call me a whiner and a sniffler and a crybaby all you want, but this getting up so early in the morning just really sucks. Yeah I know, the early bird gets the worm. I don’t care! I don’t eat worms in the morning, or any other time for that matter. I would much prefer to sleep in until 9 or 10, and let that silly early bird have the damn worms. I’ll settle for a couple of strawberry Pop Tarts and a glass of milk, or a bowl of Sugar Pops, thank you just the same.

Apparently the biggest problem with our motorhome was that we were overweight. No problem, by the time we left Spartan our checkbook was a whole lot lighter! And that seemed to do the trick.

Actually, they did a lot of work, including replacing both upper and lower ball joints on both sides, replacing a wheel seal, an alignment, and a whole bunch of other stuff. That included an oil change and filter, lube job, and routine maintenance Also, our front tires were really cupping and wearing unevenly ever since that big wind gust hit us. The tires are only two years old and have about 20,000 miles on them, so they moved the front tires to the left rear and moved the tires that were on that side to the front.

I asked the service manager if the damage to the front end could’ve been from that big wind gust that thumped us around back in Kansas, since the folks at Redlands Truck & RV Performance Center had just worked on the rig a few weeks ago in California. He said it was entirely possible, the coach is ten years old with 65,000 miles on it, and he has seen things like that before.

The weatherman had predicted some strong storms for the area, and about 11 AM one came rolling through with a lot of wind, thunder, rain, and some lightning. But it was a fast-moving storm and before long it was past us.

We left Spartan about 2:30 PM and drove 60 miles south on Interstate 69, and the difference in the ride and handling were very noticeable. They did a good job, I’ll say that for them. We got onto the Indiana Toll Road and pointed the nose of the motorhome west for the 52 mile run to Elkhart.

Almost immediately the wind picked up, and the further we drove, the worse it was. Even with all of the work we just had done it took everything I could do to control the Winnebago. A couple of gusts really blew us around, and the truckers were having a lot of problems with it too. By the time we got to Elkhart it was downright nasty and I was more than happy to get off the highway.

We pulled into Elkhart Campground and got hugs and warm welcomes from owners Bob and Gita Patel, and Bob’s mother and father. We have been coming here so long that we’re part of their extended family.

Unfortunately, that extended family lost a member earlier this year when Johnny, the older gentleman who was a work camper here and a fixture at the campground, passed away from cancer. We’re sure going to miss him.

We got parked and hooked up, then had a bunch of mail to go through that was here waiting for us. I also had a box of the new printed edition of Big Lake Lynching, and the book looks good! And speaking of books, I was delighted to learn that I’m again on the Kindle Review website’s list of the Top 100 Authors for June. That sure is a nice feeling. 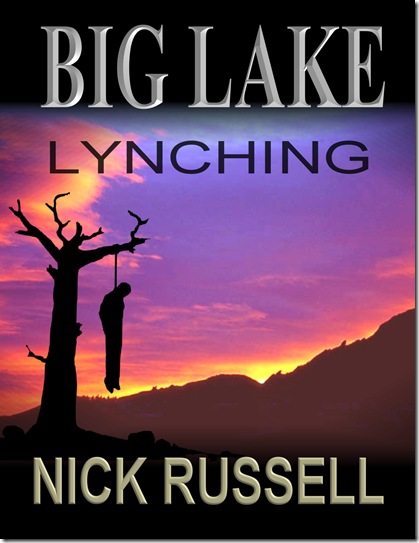 After we were done with the mail we went to El Maguey, Miss Terry’s favorite Mexican restaurant in this part of the world. She had been looking forward to this all the way across the country. Unfortunately, we were both disappointed in our meals. The queso dip was lukewarm at best, they forgot to put the cheese on Terry’s taco, and it looked like they had just thrown everything on the plate with no thought. This is the first bad meal we’ve ever had in all the time we have been eating there, so we will just call this one a bad day, and hope for a better experience the next time we go back. And since Terry has a birthday on Friday, I suspect we may be going back there again soon.

When we got back to the motorhome, Terry started a load of laundry while I started to work my way through a big backlog of e-mails. Shortly after we got home, subscribers George and Linda Loutsenhiser came by to say hello. They actually own a house just a couple of miles away from the campground, but have it on the market and are living in their Newmar, waiting for the house to sell. We had a nice visit with George and Linda, thanks for stopping by!

As I’ve said many times, being at Elkhart Campground is like being at home. Come to think of it, we have probably spent more time here over the years that we have anyplace else in the country, so in a way it is home! And it’s always good to be back home.

Thought For The Day – I don’t have time to hate people who hate me, because I’m too busy loving people who love me.

11 Responses to “Back Home In Elkhart”