Since we only had a short distance to go yesterday, we were in no hurry to get on the road. But we kept hearing a strange noise that piqued our curiosity, so we got up to check it out and found a huge Great Lakes freighter docked right across from the Fisherman’s Landing Campground.

The Algoway was so big that we couldn’t get a photo that shows the entire ship from the campground, but here is one I borrowed from the Internet. At 650 feet long, she is a medium sized self-unloading bulk carrier, launched in 1972. The ship is powered by four Fairbanks Morse 1666 horsepower 10-cylinder diesel engines, as well as three V-12 cylinder 700 horsepower auxiliary diesel engines made by Caterpillar. The ship has 17 hatches that feed into four massive below-deck holds where she can carry up to 24,000 tons of cargo. In Muskegon, she was unloading rock salt that I assume will be used on the local roadways in wintertime. 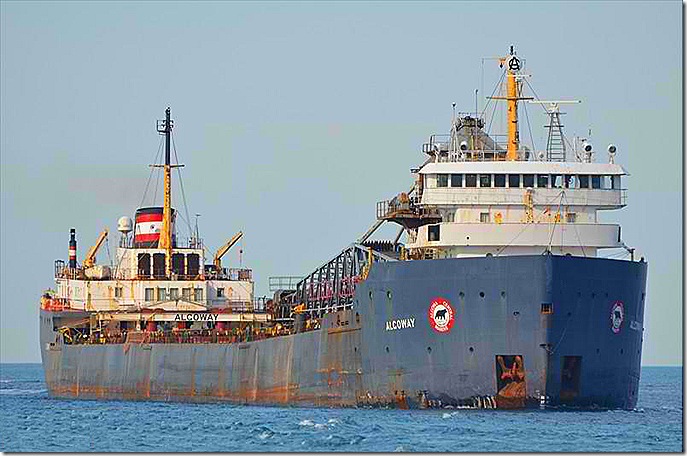 Speaking of ships, here is a picture that Rocky took of Miss Terry and me the other day when we toured the Milwaukee Clipper. Terry is the pretty one on the right. 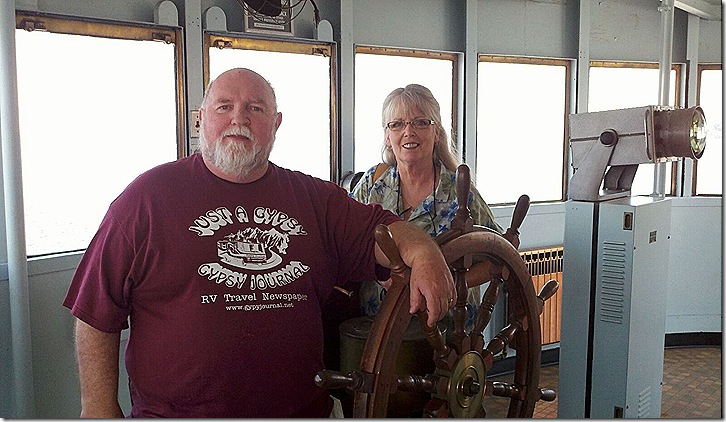 We needed to pick up a few things at the grocery store before we headed out, so we called Berni to ask if she could sneak away for an early lunch. She could, and we picked her up and went to a place called Brooklyn Bagels that was only a couple of blocks from her office. It was nice to get to see her one last time before we took off.

Back at the campground I filled our freshwater tank, then unhooked the campground utilities and got ready to travel. We stopped at the dump station to empty our holding tanks, hook the Explorer to our Blue Ox tow bar, and got on the road.

My Microsoft Streets & Trips mapping program told me it was 117 miles to our destination; Coleman, Michigan. So I expected the trip to take us about 2 1/2 hours. As it turned out, it was actually 144 miles and took about 3 hours to get here. Part of that was because we took a slightly different route than the mapping program suggested, to keep on better roads.

As it turned out, it looks like this was pretty much a wasted trip for us. There was a distinct personality conflict with the lady who was supposed to “help” Terry with her sock knitting machine. Earlier our money was fine when she was selling it, but when we arrived she didn’t try to hide the fact that she looked down her nose at people who live a lifestyle that doesn’t fit into her perfectly ordered world. We felt uncomfortable the moment we said hello and it was obvious she did too. She couldn’t believe that anyone would not have a house somewhere, and our gypsy lifestyle was as alien to her as the dark side of the moon. Terry spent a few hours with her and came home so frustrated she was shaking.

We always say that we have wheels under our house, and if we don’t like the neighbors or the neighborhood, we just leave. This is one of those cases, and we were tempted to leave right then. But since it was after 8 PM when Terry got home, it was getting close to dark, and we hadn’t eaten since our early lunch with Berni. So we decided to stay parked on their acreage overnight, and today we will take off. Terry is a smart lady and she’ll figure out the darn machine on her own once we get to Elkhart and get settled in.

We have an appointment Monday morning at Spartan Chassis, in Charlotte, Michigan, which is about 100 miles south of us. Between now and then we will probably spend a couple of days at one of the many Elks lodges, fairgrounds, and small campgrounds between here and there. We don’t have a pressing need to be anywhere, so we’ll just settle in someplace comfortable, get some writing done, and kick back for a few days. Life is good!

Thought For The Day – Living well is the best revenge.

8 Responses to “A Wasted Trip”