Nick's Blog » The Best Burger In The Country

At 7 a.m. yesterday morning the clown parked next to us in a Fleetwood diesel pusher started his engine and let it run for two full hours while he opened and slammed his bay doors, unhooked his campground utilities, had a long loud telephone conversation in the narrow space between our two motorhomes, and finally left, just after 9 a.m. I know you can’t fix stupid, but in some cases you really should be able to hit it upside the head with a baseball bat!

It was a bad way to start a good day. We drove about 20 miles south to Canyon, Texas and spent several hours touring the excellent Panhandle-Plains Historical Museum. Dubbed the “Smithsonian of Texas,” this was one of the finest museums we have ever visited, and in our 13+ years on the road as fulltime RVers, we have been to a lot of museums! Exhibits range from the dinosaurs who once roamed this regions, to early native people, Spanish conquistadors, cowboys, cattlemen, outlaws, settlers, and oilfield roustabouts. 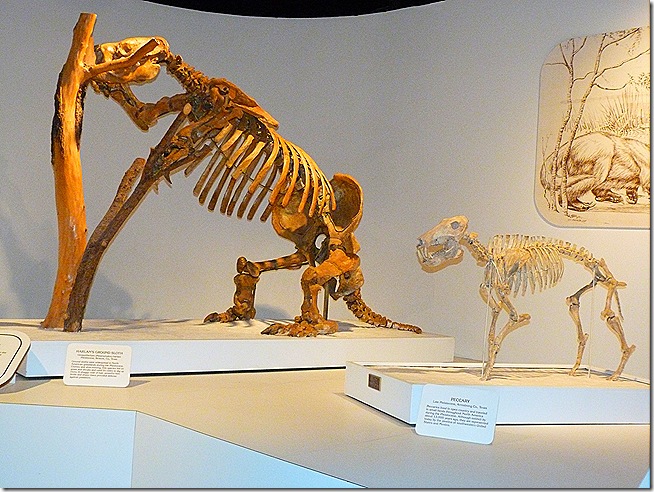 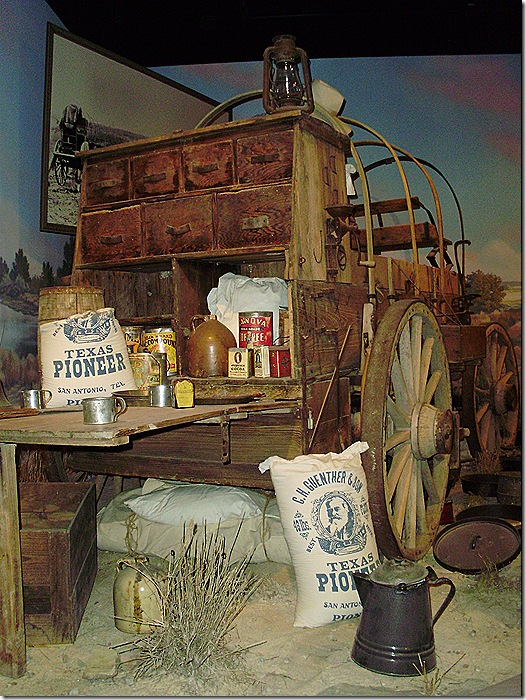 There are also extensive collections of firearms, fossils, minerals, some neat old cars, and an impressive art collection. We’ll have a feature story on the museum in an upcoming issue of the Gypsy Journal. 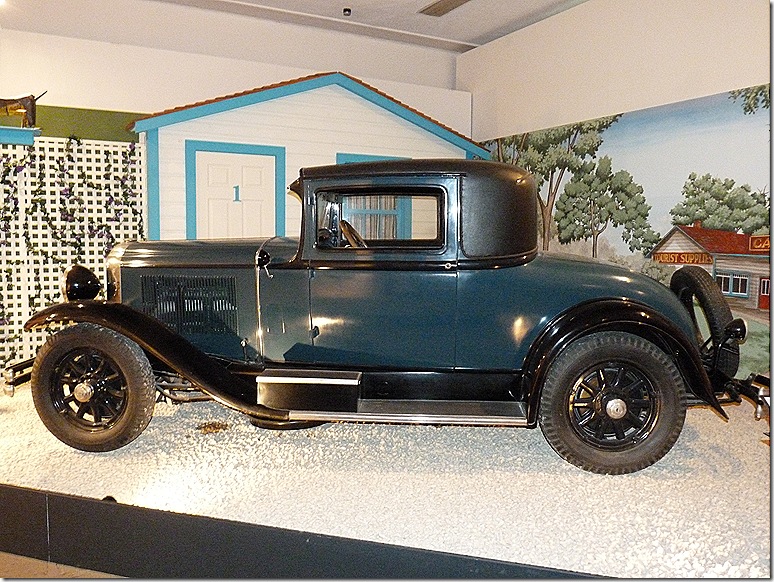 Several blog readers had recommended we try the Stockyard Café while we were in Amarillo, but it is only open for breakfast and lunch except on Fridays, so we need to find someplace else for dinner. I did some searching online and came up with the Coyote Bluff Café, which is famous for their Burger From Hell, which is smothered in fresh sautéed jalapenos, Coyote Hell Sauce, Tabasco, cheese, lettuce, tomato and grilled onions. The restaurant was featured on the Travel Channel’s Man Vs Food television show a while back, so it had to be good, right?

When we pulled up outside the small place, the first thing Miss Terry said is “You take me to all the best places!” Okay, so it’s not impressive on the outside, but the inside was a little bit better. Just a little. 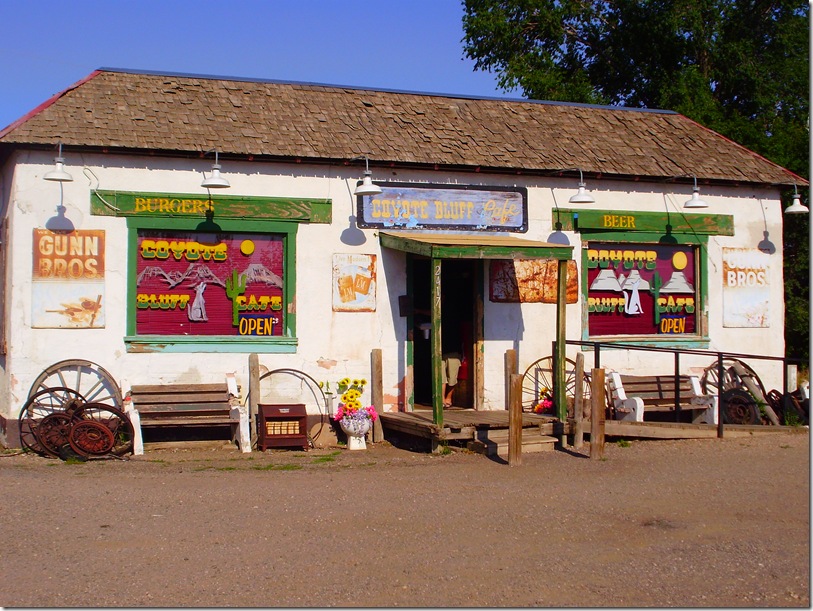 The place is decorated in what can only be called Tacky Greasy Spoon style, but the waitresses and other patrons were all friendly. Terry loves a good cheeseburger, and I… well, have you seen me? Enough said. 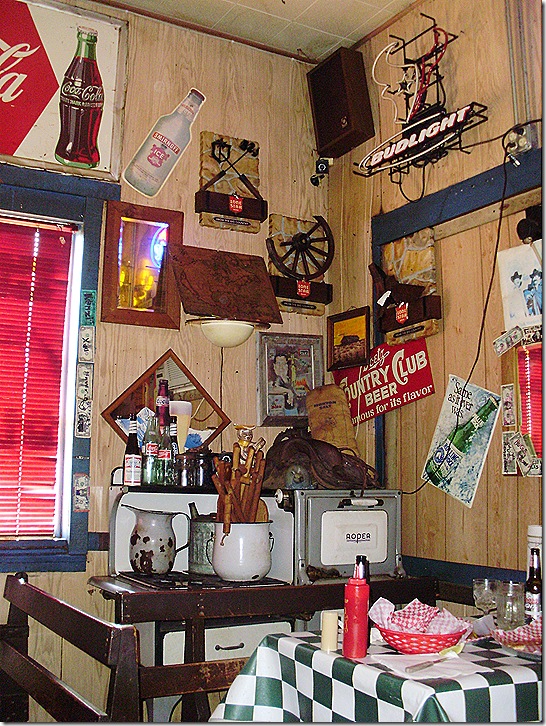 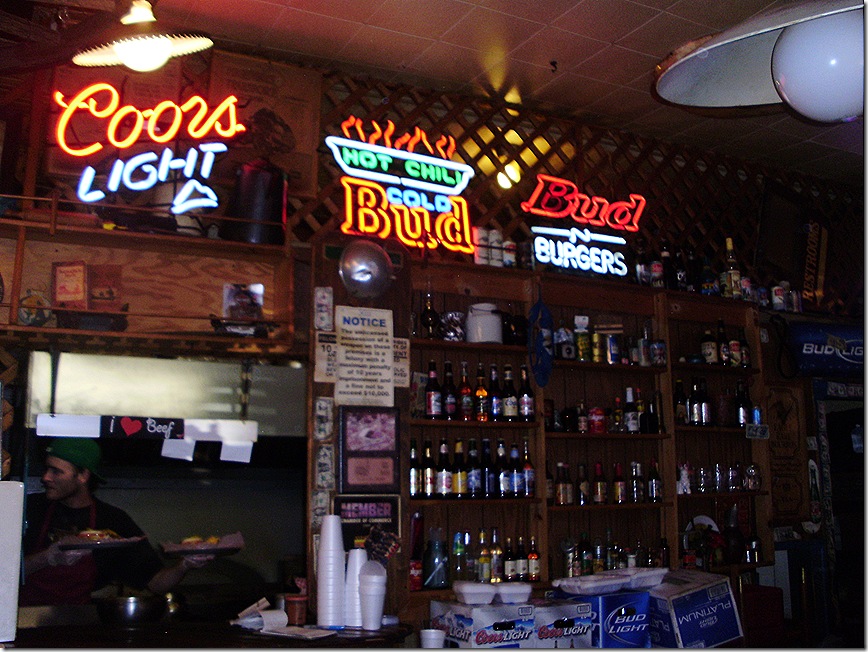 Neither of us were up for the challenge of the Burger From Hell, so I ordered the Dijon Mustard Cheeseburger and Terry chose the Green Chili Cheddar Burger with a side of guacamole. We also ordered the cheese fries, which were a meal in themselves. 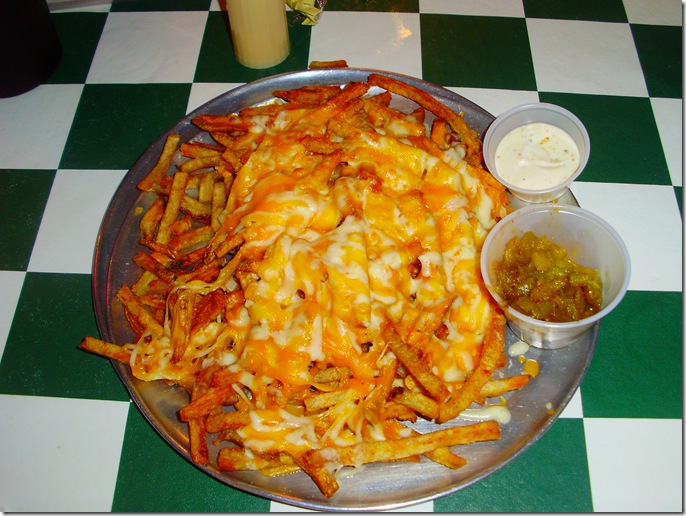 One bite of our burgers and Terry and I agreed that the Coyote Bluff Café serves the best burger in the country, bar none. They are a full half pound of lean ground beef, on your choice of a white, whole wheat, or onion bun, and they are so delicious that your taste buds will think they died and went to heaven!

In spite of her poor taste in husbands, Miss Terry is very picky when it comes to the quality of two things, Mexican food and cheeseburgers. She was literally in awe of her burger! I asked her where it rated on a scale of 1 to 10, and she said it was completely off the charts. That’s high praise! 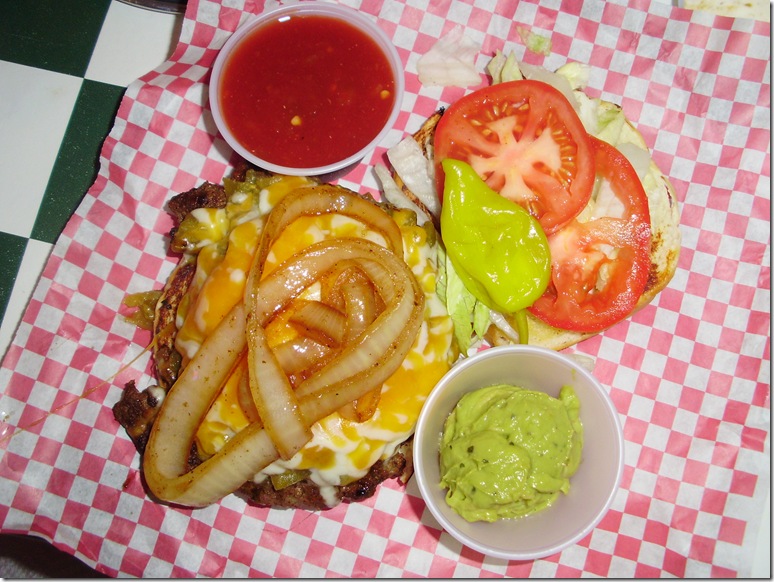 They serve hugs\e glasses of soda or iced tea, or you can grab a beer from the cooler, which is an old bathtub filled with ice in the middle of the small restaurant. I wonder if this is one of the same bathtubs those folks are always sitting outside in in those television commercials for Cialis? 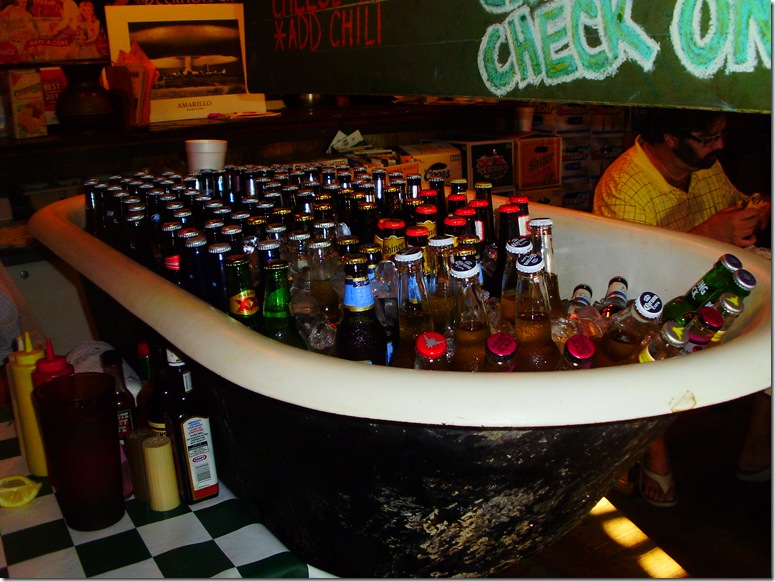 Take my word for it, the fabled Big Texan may serve the best steaks in Amarillo, but if you want the best burger in the country, put a stop at the Coyote Bluff Café on your bucket list. You won’t be disappointed.

We’ll be on the road today and I have no idea where we’ll end up, but it will be somewhere in Kansas. Hopefully we’ll have a signal and can post a blog tomorrow, but there are places in the Heartland where the signal can be patchy, so I make no guarantees. If not, we’ll be back the next day.

Thought For The Day – Wisdom is to the soul what health is to the body.

14 Responses to “The Best Burger In The Country”