We left our site at Patio Gardens in East Mesa at 10 a.m. yesterday morning, expecting an easy five hour trip to Redlands, California. Didn’t Gilligan and his crowd expect a quick trip somewhere once? 🙂

Traffic was moderate and we made good time going though Phoenix on Interstate 10. It was going to be another hot day in the desert, but our dash air blows ice cold and we were on the road early enough that it was comfortable without having to run the Onan generator and basement air conditioner.

We love being around the ocean, or the green forested mountains of the East and the Pacific Northwest, but Arizona’s desert and stark, rugged mountains have a beauty all their own. 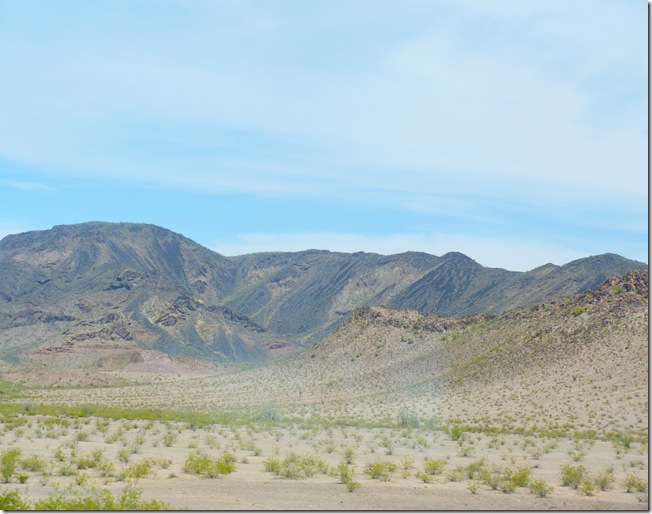 I knew diesel fuel was going to be much more expensive in California than in Arizona, so we stopped at the Pilot truck stop in Quartzsite to top off our tank. The thousands of RVers who come to Quartzsite to boondock in the desert every winter have pretty much cleared out, but we did see a few diehards still holding on.

While I was fueling up, a fellow who had just come from the opposite direction told me that the wind was blowing hard once we crossed the California state line, and sure enough, it seemed like somebody flipped a switch when we left Arizona. It started with a stiff breeze, and got stronger the further we went. We were seeing a lot of dust blowing off in the distance, including what folks in the West call dust devils, which look like mini-tornadoes as they swirl their way across the desert. 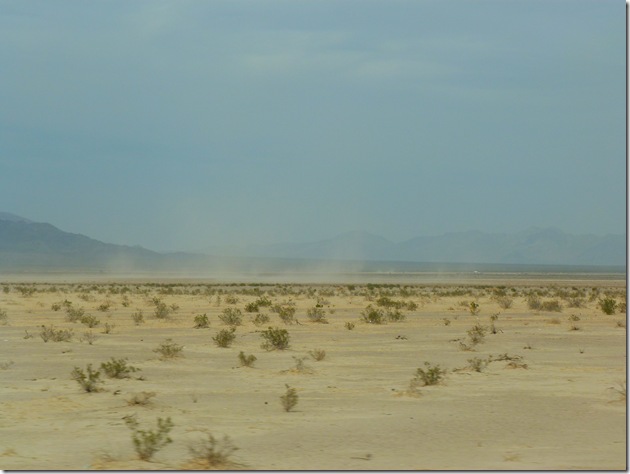 The digital thermometer on my dashboard said it was 98 degrees in Blythe, and I was glad we were inside our cool, comfortable rig. Even if it was getting bounced around in the wind gusts. As if we didn’t have enough to deal with, a bird hit our passenger side windshield with a thump, causing Terry to cover her face in case it came all the way through. It didn’t, and though I expected it to break the glass, we got lucky and escaped with no damage.

I was glad we bought fuel in Arizona, where we paid $3.98 a gallon for diesel, because in Indio it was $4.49. West of Indio the hillsides are covered with a massive wind farm, and the giant arms of the big wind turbines were really moving. 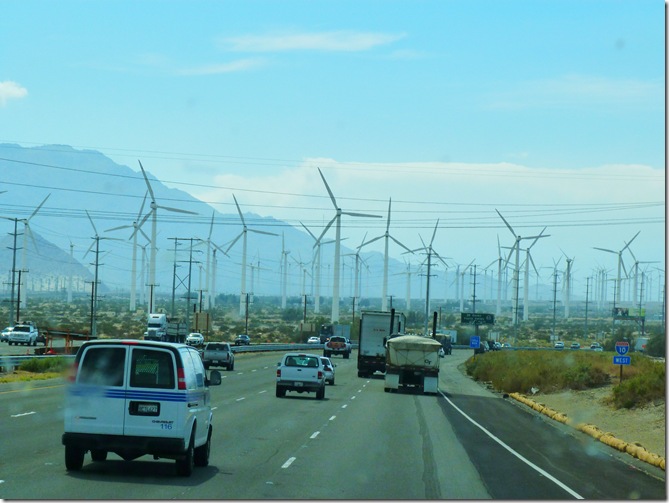 And so were we, all over the highway. Trucks and RVs had slowed down to under 40 miles per hour as we made our way uphill in some of the worst winds we have ever driven in. We were only about 30 miles from our destination, or I would have pulled over and waited it out. At one point a soda can came flying by, a few feet off the pavement, and never hit the ground as it blew across four lanes of traffic. I wouldn’t have been surprised if we had seen a girl from Kansas and her house sailing past!

I wonder how much energy these things generate? 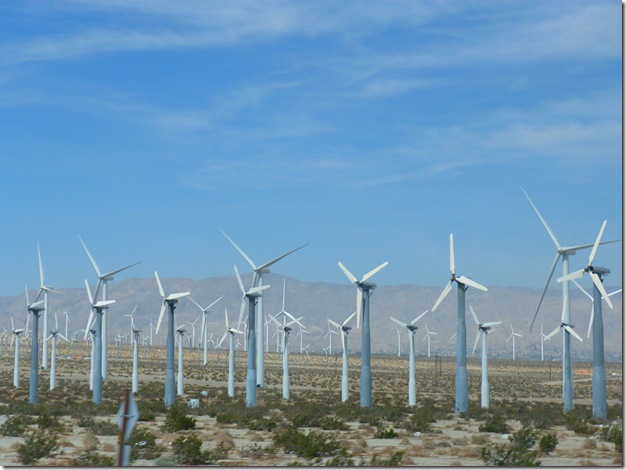 By the time we finally got off the highway in Redlands, with 341 miles behind us, it was 4:30, over six hours after we set out, most of it very rough hours. Keith Shomaker from Redlands Truck & RV Performance Center had called us to say that several customers had decided to stay over once their work was finished (and who can blame them for not wanting to be out in the wind late in the day?), so he had arranged for us to stay at Mission RV Park, just a couple of blocks from his shop.

We got parked and hooked up to 50 amp power, then relaxed for a while and let the tensions of the trip ease up. It was only in the mid-60s, a welcome change from Arizona’s recent triple digits. A little after 6 p.m., Keith came by to visit for a while, and then Terry and I went to Nick’s Burgers, a local favorite that came very highly recommended. The burgers were huge and delicious, and Terry really liked her fried zucchini. This one is going into our Favorite Restaurants Guide!

This morning we’ll take the Winnebago over to the shop and let the crew at Redlands get started on it. We have some folks who want to meet us and consume mass quantities of vittles, and I’m always glad to do that. Keith says we’ll be in and out in one day, and I’m hoping that when it’s time to get back on the road, we’ll have a more pleasant trip back to Arizona.

Thought For The Day – My imaginary friend thinks you have serious mental problems.

6 Responses to “A Rough Trip”