Early Sunday morning the wind began to blow so hard here at the Pima County Fairgrounds RV Park that the straps on our window awnings were making a lot of noise. So much noise that I drug myself out of bed, pulled on my sweats, and went outside to put the awnings up. Brrrr…. it was cold! I quickly hurried back inside and jumped under the covers again to snuggle up to Miss Terry.

For most of the day the wind blew hard, it rained, and was generally miserable. There were puddles of water standing everywhere. 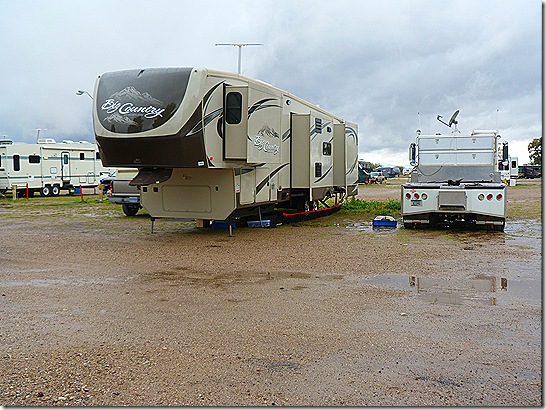 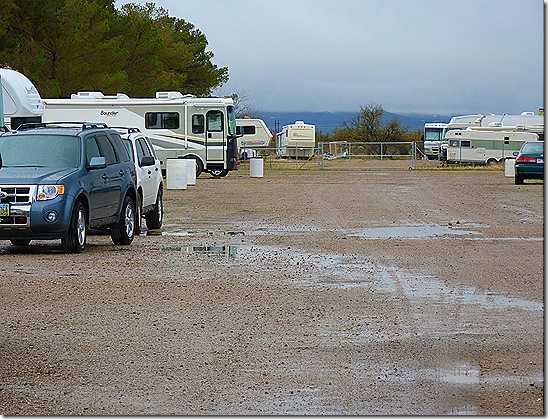 I love dogs but there’s a reason I don’t own one. There’s no way I’m going to be walking around outside in this kind of weather while some silly mutt finds exactly the right place to do its business. I’d rather let you feed it, walk it, and clean up after it, and I’ll just come by and get the occasional puppy fix, thank you just the same. 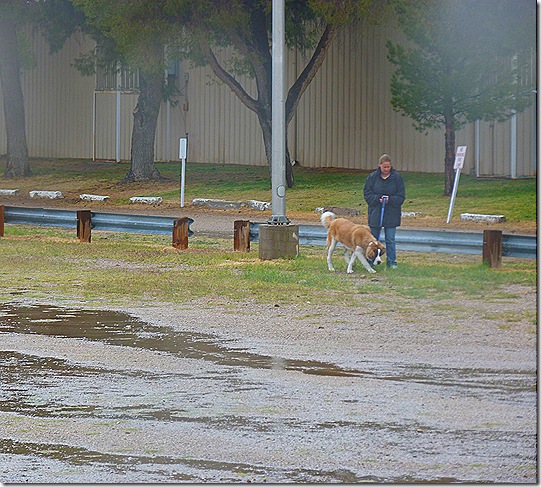 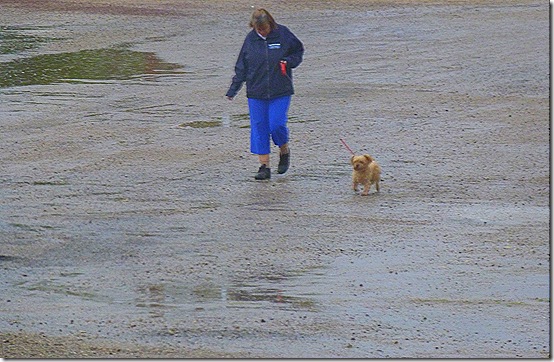 As nasty as the day was, the folks at the office were kept busy with what seemed like a steady stream of RVs pulling in. I’m not sure if they all started out heading this way, or just got off the highway seeking refuge from the storm. 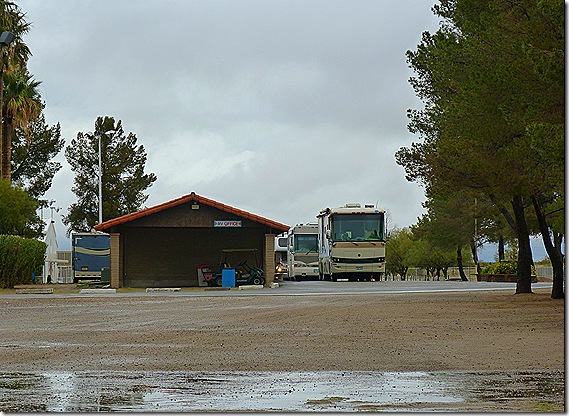 About 2 PM John and Kathy Huggins, who produce the popular Living The RV Dream weekly podcast, drove up from Benson for a visit and to interview me for an upcoming segment on the Gypsy Journal and on e-book publishing. We first met John and Kathy a couple of years ago while we were in Yuma for a Gypsy Journal rally, and really enjoyed getting to know them. So it was a real treat to spend the afternoon visiting with them. John says they’re going to make it a point to attend our Eastern Gypsy Journal rally September 3-7 in Celina, Ohio, and has even agreed to do a seminar on podcasting. We are looking forward to seeing them there.

After John and Kathy left to go back to their workamping gig in Benson, Terry made us a quick but delicious dinner, and then we spent the rest of the day and evening doing what we do most of the time – I wrote part of another chapter of my next book, Terry slogged her way through more paperwork from our Yuma rally, and we watched the TV news showing all of the storm coverage from around the state. A 130 mile stretch of Interstate 40 from Kingman all the way east to Winslow was closed due to heavy snow. It may be cold, wet, and rainy here in Tucson, but I would still rather put up with this than all of that white stuff!

Today we have to drive down to Green Valley, about a 40 mile trip, for another doctor’s appointment for Terry. People keep asking if something is wrong, with all these medical appointments. No, please don’t worry, we’re just setting up primary care for both of us here in Tucson, me with the VA hospital, and Terry with private physicians. Doing so requires a lot of exams, tests, and yes, writing a lot of checks. Hopefully we will have all this behind us in the next week or so and can get back to doing fun stuff.

Thought For The Day – Always remember that you are braver than you believe, stronger than you seem, and smarter than you think.