Tom and Barbara Westerfield had been here at the Pima County Fairgrounds RV Park the last four nights, and yesterday morning it was time for them to head on down the road looking for new adventures. After they had pulled out of their site they stopped across from our rig to hook up their Jeep behind their motorhome. Greg and Jan and Terry and I went out to tell them goodbye.

Except for a brief departure of a couple of days while they went and had some work done on their diesel engine, we have spent a lot of time with Tom and Barbara over the last few weeks. They are on our advance crew and were in Yuma with us a week or so before the rally, and most of the time since then. 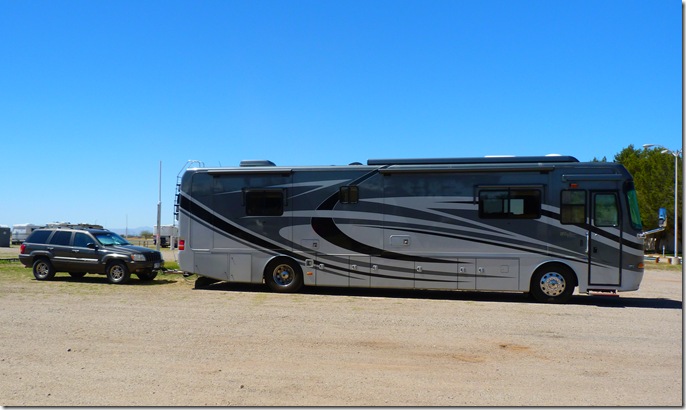 After hugs all around, Tom and Barb pulled out and we went back inside our Winnebago. A big part of the fulltime RV lifestyle is saying goodbye, either to friends or family. But the good news is that the road runs both ways and we can always get back together again someplace in our travels.

Miss Terry had another miserable night Thursday, and by yesterday morning she was really feeling rough. But by the end of the day Friday I think she may have started to turn the corner, and she said she felt at least a little more human. For my part, I started coughing and getting a sore throat Friday morning. Oh what fun!

Except for making a quick run to the grocery store for some things we needed and some Zicam, I didn’t do a whole lot yesterday. I needed gasoline in the Explorer and Fry’s has a gas station, but it was like a circus there. They were trying to pull up to the pumps from every direction at once, a couple of guys were screaming at each other, each accusing the other of cutting him off, and when one kicked the other’s door I decided I had seen all I needed to see. I drove a half mile up the road to a convenience store, pulled right up to the pump and filled up with no problem. And it was a penny a gallon cheaper!

A few days ago I reported that an agreement had been worked out with their creditors to allow the RV Museum in Elkhart, Indiana to keep the doors open. The museum’s historian, Al Hesselbart, told me yesterday that the Ingram family, one of the museum’s major creditors and benefactors, have agreed to match dollar for dollar up to $100,000 any donations that the museum receives between now and August to pay down their note with the bank.

Here is a chance for you to make a difference and help preserve a valuable asset to the entire RV community. I hope you’ll consider logging on to the Museum’s website to make a donation large or small. If everybody who reads this blog today would donate just $5, it can really make a difference. And all donations are tax-deductible, since the museum is a nonprofit foundation. Every year Al comes to our eastern Gypsy Journal rally  at his own expense and presents two or three seminars, and the museum always donates door prizes to our rallies. I think it’s time we give something back, don’t you?

Today is supposed to be our last day here at the Fairgrounds RV Park, since they are closing down to start getting ready for the Pima County Fair. I’m not sure why they’re running us all out this early since the fair doesn’t start until mid-April. I think they let us stay until the end of the month last year. Anyway, I think we are just going to go down the road a few miles to another RV park for a week or so. We’ll take the time to get some rest, spend a little more time with my cousin Beverly, and maybe even get to feeling better. That would be nice.

9 Responses to “Saying Goodbye To Friends”