Nick's Blog » On To Tucson

One of the things I like about an RV rally is all the new products and services we discover. Our Yuma rally was no exception; in addition to getting our motorhome weighed by Paul and Doris Cunningham from RV Weigh Portable Scales, I also got to meet Wade and Jacqueline Weiss from Wade Maid Premium Products, based in Anacortes, Washington.

Their company makes excellent RV cleaning products, and during the rally Wade offered to show me just what they could do. He spent some time getting all the grime off of our motorhome and by the time he was finished, the old Winnebago was really shiny and beautiful. In fact it’s so shiny that going down the road I can look in my rearview mirror and see the reflection of trucks passing me in the side of my rig! Now that’s shiny! 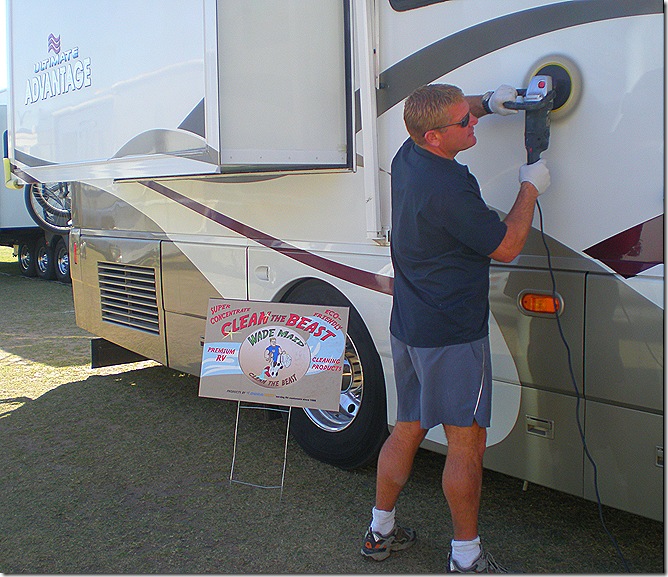 I also bought a RhinoFlex sewer hose kit from Barry and Adie Pulis, who were manning the Camco products booth. A few months ago I bought a Thetford SmartDrain kit which cost over three times as much and was totally worthless. It leaked at every connection, and the hose was so soft and flimsy that if you tried to lift one end to make it drain faster it would just collapse shut on you. The RhinoFlex is a much better product and I haven’t had one drop leak out on me. The fifteen foot hose is sturdy, collapses to save space, and everything about it just beats the Thetford hands-down. 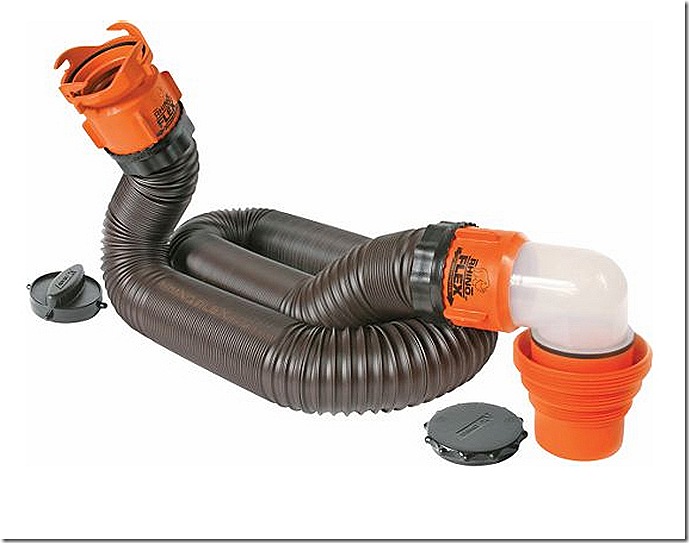 For several years now I have been using a PressurePro tire pressure monitoring system, and while I had no problems with it and I felt it was an excellent product, I wanted to try the new generation TireTraker TT–400C system that Daryl and Cheri Lawrence of Lawrence RV Accessories sell. The TireTraker has a couple of advantages I really like – the display unit is much smaller, it is battery operated and doesn’t have to be plugged in to a 12 volt source when in use, it reports on tire temperature as well as pressure, and the batteries and the sensors can be replaced for less than a buck. 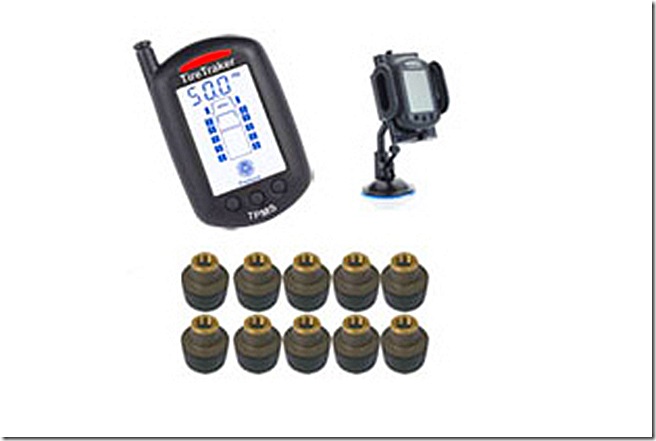 We spent Friday and Saturday night parked on Daryl and Cheri’s lot in the Foothills area of Yuma, along with Charles and Chris Yust, and Greg and Jan White. Their lot was large enough to easily hold all four of our big diesel pusher motorhomes and our cars, with room to spare. 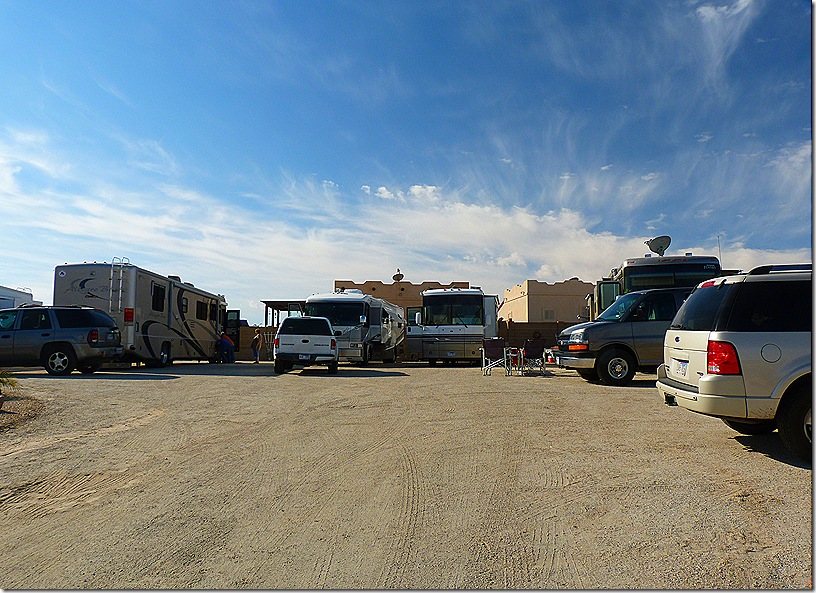 Sunday morning, Cheri installed the sensors on the motorhome and Explorer tires, and Daryl gave me a quick lesson in how the system operates. It’s a very good product and I’m looking forward to using it and reporting back to you. 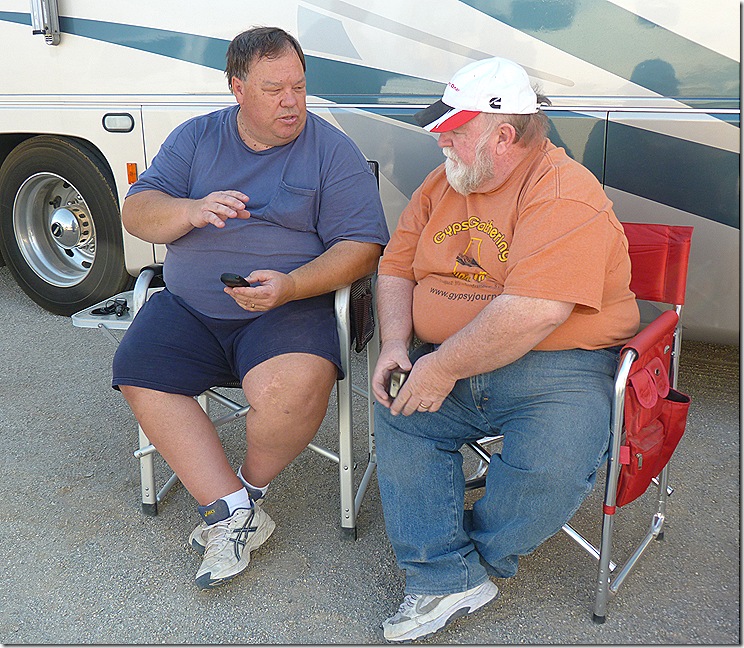 While I had my 150 PSI Sears air compressor out topping off my motorhome’s tires, Charles borrowed it to air up one of the tires on his coach, too. That little Sears unit is a workhorse and has no problem handling big motorhome tires. 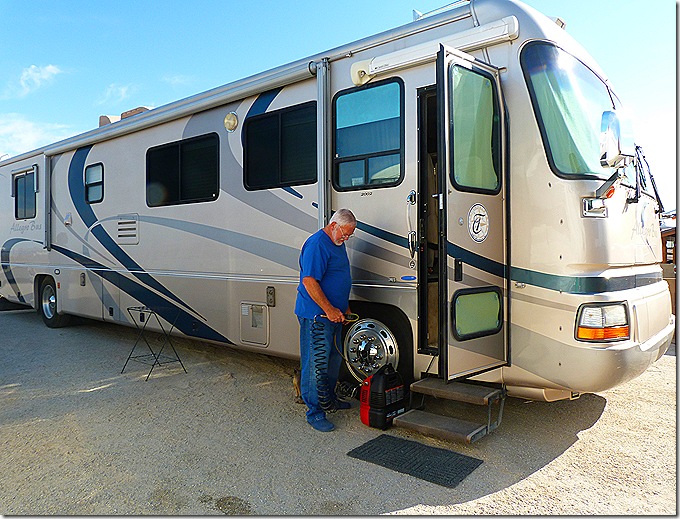 We left Yuma a little before 11 A.M. and traveled east on Interstate 8, slowing down long enough to go through the Border Patrol checkpoint, and about 12:30 we stopped in Gila Bend for lunch at Sophia’s Mexican Food, which is a favorite of ours and Greg and Jan’s. The place doesn’t look all that impressive from the outside, but then again, what does in Gila Bend? But the food is delicious. I had a shrimp and cheese burrito, Miss Terry had a shrimp enchilada and a fish taco, and I’m not sure what Greg and Jan had but it all looked good.

Back on the road, we continued east to Interstate 10 and then followed it through Tucson, arriving at the RV park at the Pima County Fairgrounds a little after 4:30 P.M. We got a full hookup 50 amp site at their $100 a week rate and I paid for two weeks. Greg and Jan are two spaces away from us and we’re looking forward to some down time while we are here.

We had planned to get together with my cousin Beverly when we arrived, but Terry and I were so darn tired that it was hard to stay awake the last 50 miles of our trip. So once we got the motorhome parked and hooked up I called Bev and apologized, but told her we were just too tired to go back out. She understood and we’re all looking forward to getting together with her today. Once we had the inside of the Winnebago somewhat organized and some of the rally stuff put away, we spent the evening relaxing. We watched TV, answered e-mails, and read some of our favorite blogs. It felt nice not to have to be doing anything for a change.

Thought For The Day – A true love story never ends.

5 Responses to “On To Tucson”