Yesterday morning Greg and Jan left the Pima County Fairgrounds RV Park about 9:30, and we were up to see them off. There were a couple of rounds of hugs all around, and maybe a tear or two was shed, but we know we’ll see them again in late August when we meet up again in Celina, Ohio for our Eastern Gypsy Journal Rally. But we sure were sad to see them pull out.

But before they left, I got a couple of photos to remember them by. 🙂 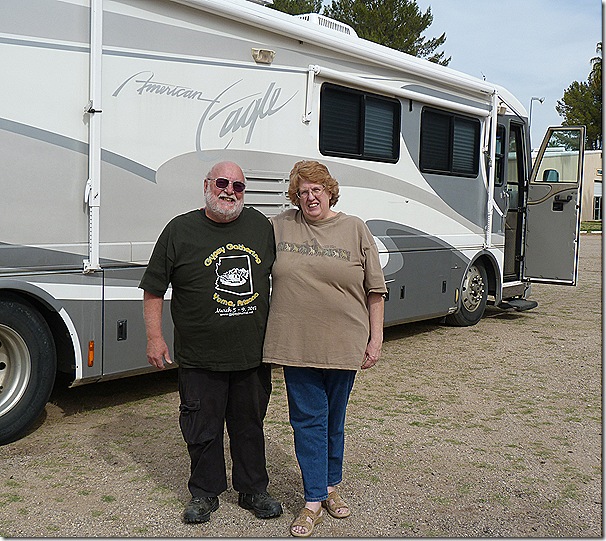 It was a traveling day for us as well, but we weren’t going nearly as far. The fairgrounds was kicking all of the regular RVers out to start getting ready for the upcoming Pima County Fair, but we had decided to stay in Tucson another week to get some rest and hopefully get to feeling better. So we made reservations at a local RV park until next Sunday.

Now, I hope you’ll forgive me, but I’m going to whine and snivel for a moment. Terry and I have been on the go for weeks, and we are both worn out, sick, and exhausted. In fact, except when she was undergoing treatment for cancer years ago, I have never known Terry to be so miserable as she is right now. In another few days it will be time to start working on a new issue of the Gypsy Journal. Why is it rude for me to say we need a few quiet days just to ourselves to rest and recuperate?

Yesterday I made three people mad because I declined to get together with them. One has asked us four times, and he went off on me when I again said no, we’re just not up to playing hosts or guests, or going sightseeing. He and his wife didn’t come to the rally because they were too busy, but now they think we are snobs because we don’t feel up to visiting with them. Another couple demanded to know where we are staying, because if we wouldn’t come to them, they would come to us, and got mad because I would not tell them.

We really do care for our readers, and we appreciate your support and friendship. We really do. But sometimes part of friendship is giving somebody space when they need it. And right now, we really need it. I hope people will understand, but at the same time, I’m really tired of apologizing over and over because we can’t meet everybody’s expectations 24/7. So I’m not going to do it any more. We’re not snobs, we don’t think we’re better than anybody else, we’re not “suddenly rich” because of my books and don’t need our readers any more, as one of the people mentioned above said. We are the same people we’ve always been, just sick, tired and burned out. Take it for what it is and draw your own conclusions. And to the other nice folks who extended invitations, and were understanding and compassionate when we begged off, thank you. We will try to make time to get together somewhere down the road.

Okay, tantrum over, let’s get back to business. Sometimes people ask what fulltime RVers do everyday when we are not traveling. We do the same things people in sticks and bricks houses do – we read books, we watch TV, we go shopping, we work or volunteer, we worship as we choose, we visit family and friends, and we participate in our hobbies, to name just a few. My friend Jaimie Hall Bruzenak had an interesting post on the RV Lifestyle Experts blog about Affordable RV Retirement Hobbies. Check it out, you may pick up and idea or two.

Yesterday evening I got a phone call from Greg White, asking if I had jinxed him because I didn’t want them to leave us. Greg said they were coming into Las Cruces, New Mexico when their American Eagle just died. They coasted onto the shoulder, and tried to figure out what the problem was. Greg said his Silverleaf engine monitor said they had over 30 gallons of diesel left, but every indication was that they were out of fuel. He drove the truck to a nearby station and bought 10 gallons more, just in case, but the rig still wouldn’t start. He called CoachNet roadside assistance and a tech tried to talk him through re-priming the Cummins engine, all with no success. So they finally got towed into a garage, where they were spending the night. So if you don’t see a post on Greg’s blog today, don’t worry. They are safe, they have help, and hopefully today the problem will be fixed, whatever it is.

18 Responses to “I’m Through Apologizing”