Nick's Blog » A Long Day At The VA

Yesterday was a very long day for me. I arrived at the Tucson VA Hospital just after 10 AM, and by the time I left a few minutes before 5 PM I had been poked, prodded, examined, x-rayed, digitally imaged, had my skin frozen with nitrogen, and probably a few other things I can’t remember right now.

By the time I finally got back to our motorhome at the Pima County Fairgrounds RV Park I was sore and tired. And I’m not done yet! I have to go back again Tuesday morning. I’ll tell you what, getting old isn’t for sissies!

The good news is that for a fat old guy pushing 60, I’m in pretty darn good health! But I’ll let you in on a little secret – if I had known I was going to live this long I would have taken much better care of myself.

Today it’s Miss Terry’s turn. She has to be at a lab at 10 AM for blood work, and she has some doctors’ appointments that we hope to get scheduled next week. What happened to coming to Tucson to relax for a couple of weeks after the rally? What the heck happened to that plan?

While I was gone, Greg White came over and he and Terry pulled our Splendide washer/dryer combo out of its cabinet in the corner of the bedroom. A while back the dryer part stopped working and Greg suspected it was the timer mechanism. It took quite a bit of work to get it out of the cabinet it was built into, but once he could access it, Greg confirmed that it was the timer and ordered one. He said once it arrives it will take less than an hour to install it. In the meantime, we have this big old thing hanging halfway out of the cabinet. I’m glad it’s on Miss Terry’s side of the bed, because if it was on my side I would probably break an ankle or something walking into it in the dark. 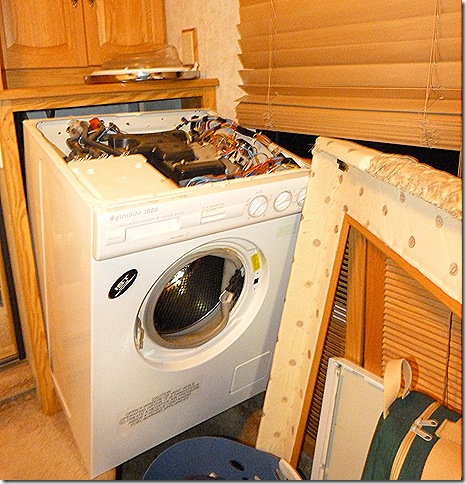 Terry and I still have not caught up with our sleep from the rally, and being at the VA hospital all day long really wore me out. So after dinner I didn’t do much except catch up on e-mail, while Terry prepared some orders to mail out today. We were both more than ready for bed, so I wrote the blog and set it up to post automatically at midnight, something Greg taught me to do a few days ago that will really make my life easier. Until now, I have stayed up to post the blog at midnight local time wherever we happen to be. Usually we are up late anyhow, but on days like these, or during a rally, it will really be nice to set it up ahead of time and go to bed.

Speaking of Greg, I reported in yesterday’s blog that his Our RV Adventures blog had been disabled by WordPress for some reason. We still don’t know what happened, but Greg said that about 11 AM yesterday the blog was back up and working fine. I guess the gremlins pushed the wrong button just to create mischief.

Thought For The Day – The only way not to think about money is to have a great deal of it.

3 Responses to “A Long Day At The VA”