Nick's Blog » What Happens Next?

I have been so busy lately that I’ve gotten behind in my blog reading, so it wasn’t until last night that Miss Terry told me about Chris Guld’s blog from February 10th, titled My Problem with Nick Russell. At first I thought I was in trouble, but as it turns out, it was actually a very nice compliment. Thanks Chris. You know I love you too.

We’ve been in a holding pattern, not sure what we will do after our Gypsy Journal rally is over in Yuma. We had thought about going over to the Escapees Jojoba Hills co-op in Aguanga, California for a week or so. We always wanted to visit, and never seem to get there. Well, as it turns out, we’re still not going to. 🙁

We have been waiting on confirmation for some medical appointments in Tucson. A couple of telephone calls in the last day or so precipitated a change in travel plans. The rally ends on Friday, March 9, and we will hang around for a day or two at the fairgrounds in Yuma catching our breath and getting the final rally details wrapped.

Then on Sunday or Monday, we will drive back to Tucson, and Terry has appointment with her new doctor there on Tuesday afternoon, the 13th. The next day I have an appointment at the VA hospital. We’ll probably hang out in Tucson for a couple of weeks, while the VA tries to squeeze me in for one other appointment, and we see if Terry is going to need any tests or medical follow-up. Nothing’s wrong at this point, it’s just routine checkups that are needed when you sign on with a new doctor.

From there, who knows? I’m sure we’ll come back up here to East Mesa/Apache Junction and spend some more time with Terry’s parents, especially since we have been sick most of this visit and haven’t had much time with them. If the VA can’t rearrange my appointment schedule, we will have to make one more trip down to Tucson the end of April.

The only place we have to be is South Dakota sometime in the first couple of weeks of June. Terry’s driver’s license is due to expire then, and mine expires in October, so we’ll try to get both of them renewed while we’re there. Between now and then, except for the medical stuff, we don’t have any real plans. We do know we don’t want to be here in the desert when to starts getting too hot. We may run up to the Camp Verde Thousand Trails, or make a stop in our old hometown of Show Low. We’ll just play it by ear between now and then.

Speaking of Thousand Trails, check out these pictures my friend Bill Joyce sent me from the Orlando Thousand Trails! This critter was living in one of the smaller lakes in the preserve, and as it turns out, my buddy Dave Damon’s Heartland fifth wheel backs right up to the lake. No wonder I haven’t heard from Dave in a while! 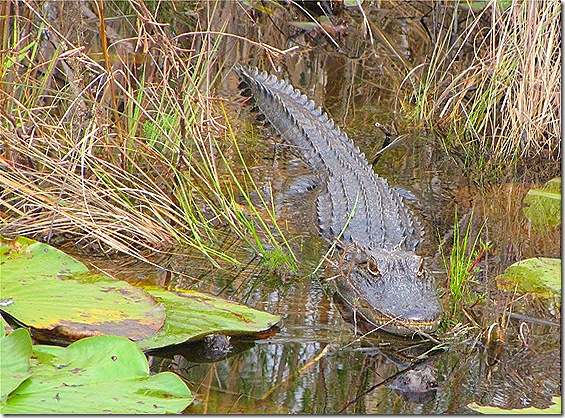 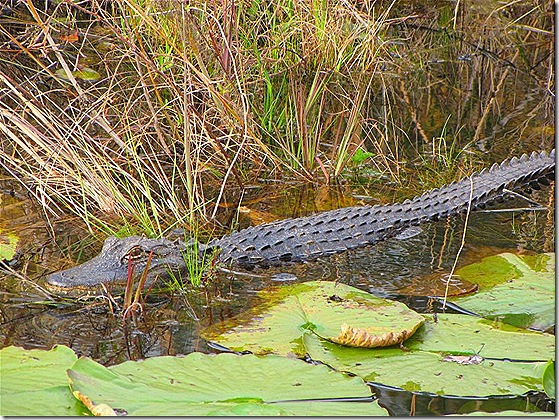 Of course this is nothing special for Florida. Any body of water larger than a birdbath usually has at least one resident gator. That’s one more reason I don’t go swimming there. Sure, I’ll paddle my kayak, but this kid isn’t getting in the water with things like that!

Thought For The Day – You have to let go of the life you have planned to have the life that is waiting for you.

4 Responses to “What Happens Next?”