It was raining when we woke up yesterday morning and I was really tempted to just roll over and go back to sleep. But we have a lot of miles to cover, so there was no time to waste. Fortunately, by the time we were dressed, checked our e-mail, and were ready to start facing the chilly morning outside our door, it had stopped raining. That doesn’t mean it wasn’t cold! It was 49° when I went out to unplug our electric cord. Since we were just going to be in Del Rio overnight, I hadn’t hooked up the water hose or sewer connection. We pulled out of our site and I tried my best to dodge the many tree branches reaching out to scrape the sides of our Winnebago as we left Buzzards Roost campground.

Driving north on U.S. Highway 90, we passed several other RV parks before we got out of town, including another Passport America park called Holiday-Trav-L-Park that looked much nicer and was even a couple of bucks cheaper. We made a mental note to ourselves to stay there the next time we are in the area.

Del Rio sits on the edge of the Amistad National Recreation Area and with 67,000 surface acres and miles of shoreline, Lake Amistad is popular with fishermen and boaters, campers, and water sports enthusiasts. The water level of the lake is down currently, due to the drought that Texas has been experiencing and because water is being released through the dams to power electric plants. But even with all that it is still massive. Who knew there was that much water in West Texas! 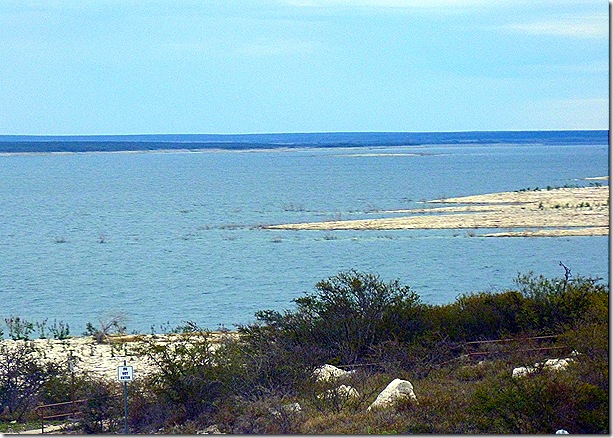 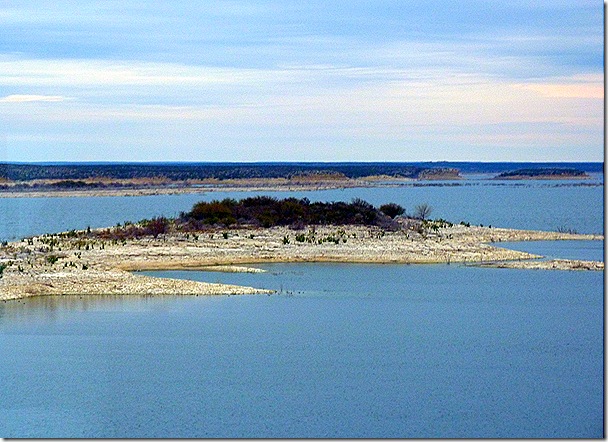 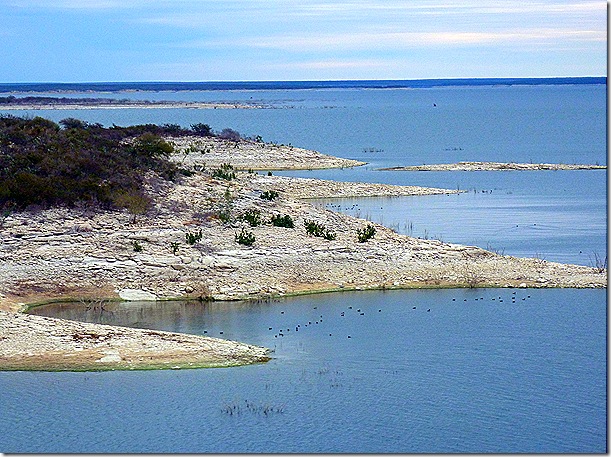 One thing I didn’t like about the lake was a very long, very high, two-lane bridge we had to cross. At least the railroad bridge that paralleled us had sides. I wish I had sides! 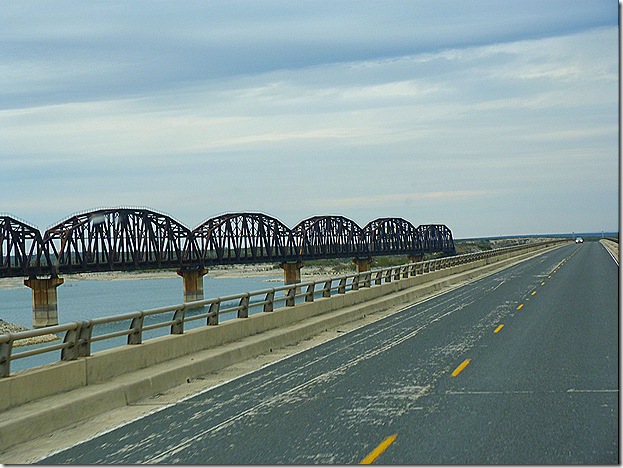 I’m not a big fan of West Texas because except for miles and miles of Badlands, windmills, and a few abandoned buildings, there is not really a lot to see. 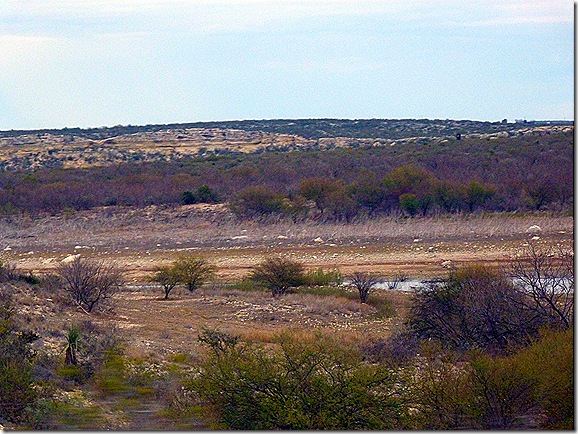 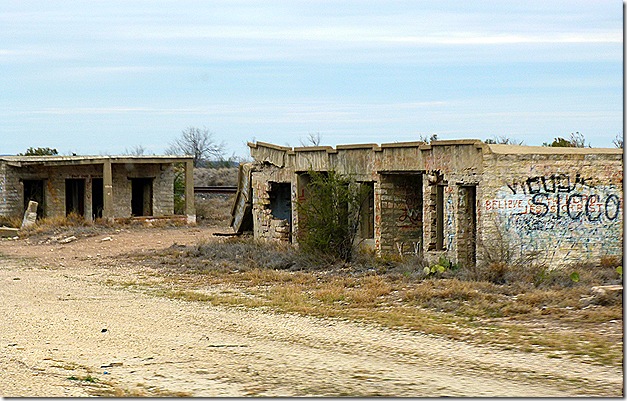 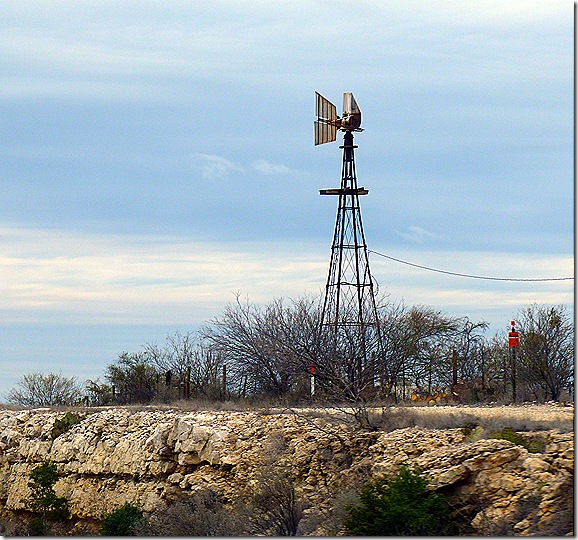 US Highway 90 is a good road as it winds its way across the countryside. There were some pretty steep hills, but nothing the Cummins engine in our Winnebago couldn’t handle. 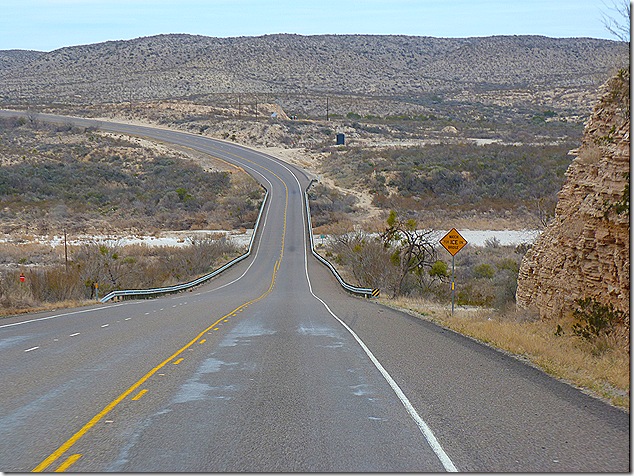 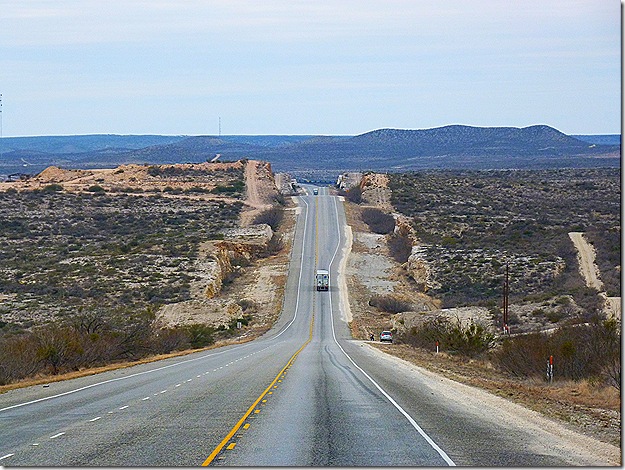 We passed Langtry, where Judge Roy Bean held court, earning himself a place in Western folklore forever. There is a visitor center and museum at the judge’s old headquarters; the Jersey Lilly, with Wi-Fi internet access and room to park an RV. We didn’t stop this time around because we visited Langtry on a previous trip through this area. 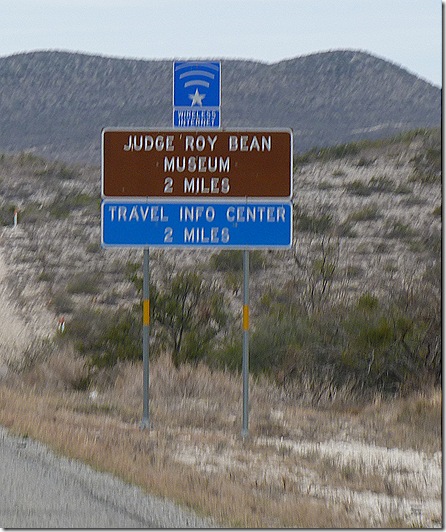 The further west we traveled the more rugged the country became, the sagebrush began giving way to cactus and mesquite, and we started seeing mountains. Some of the rock formations were pretty awesome, and Miss Terry was busy with her Panasonic Lumix digital camera taking pictures as we rolled along. 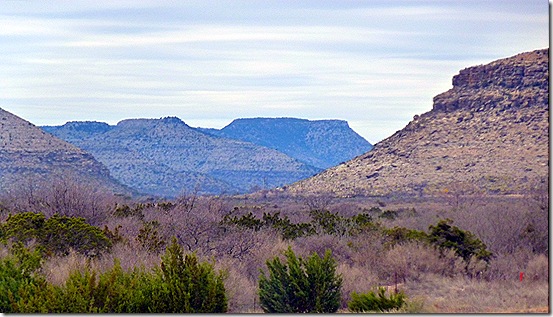 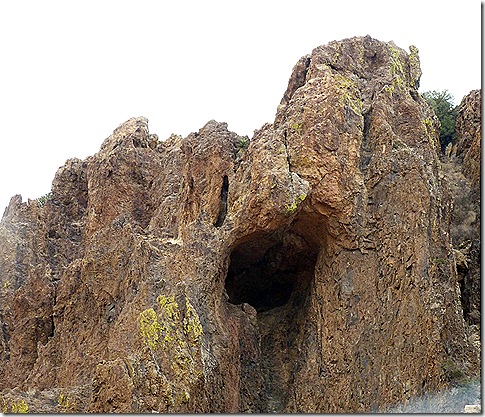 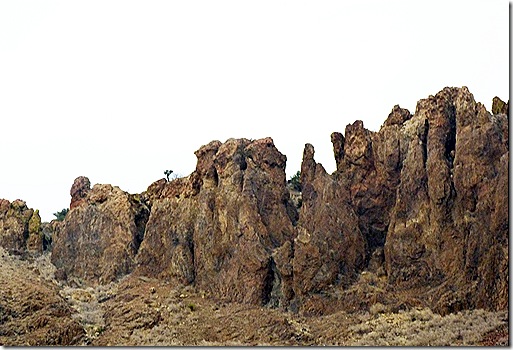 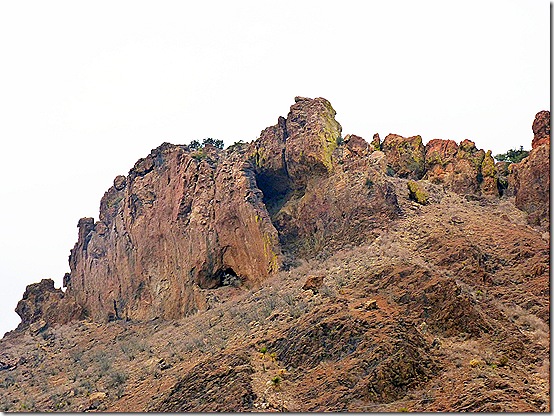 Because it was such a long way to Van Horn and I wasn’t sure if we could find any diesel fuel along our route I stopped in Sanderson and bought $50 worth just to give us some buffer. Way out here in the middle of nowhere, $50 doesn’t buy much diesel! Not that it does anywhere these days. As it turns out I needn’t have worried, there was plenty of fuel available all along our route, in Marathon, Alpine, and Marfa. It cost more than in Del Rio or Van Horn, but it was there.

Somewhere along the way we passed the Pecos River on another high bridge. 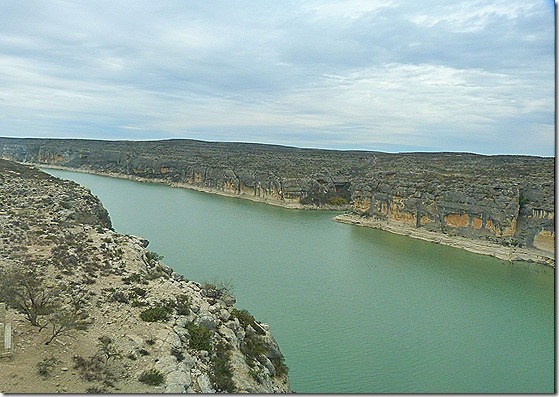 I’ve always wanted to go to Marfa and see the famous ghost lights. Since the late 1800s people have reported seeing mysterious lights in the distance near Marfa. A couple of miles outside of town there is a big viewing area with lots of room for any size RV and easy access. We didn’t have time to stop this trip and it was too early in the day, but we’ll be coming back here again sometime. Besides the lights, Marfa has a couple of other claims to fame. The movies Giant, No Country For Old Men, and There Will Be Blood were all filmed here. Marfa was also the setting for the play and movie Come Back To The Five And Dime, Jimmy Dean, Jimmy Dean. 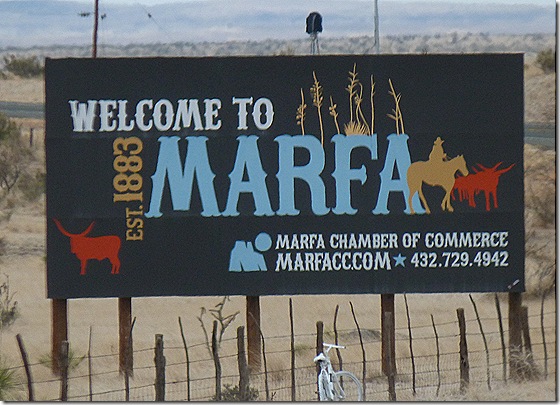 We like neat old courthouses, and Marfa has a very nice one. 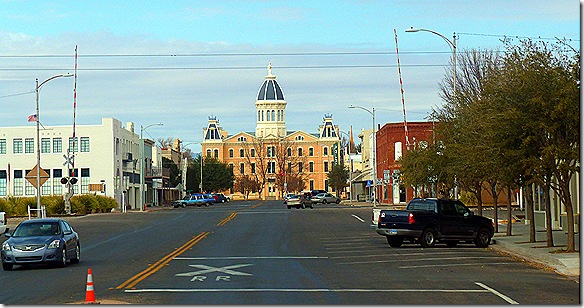 Eventually we made our way to Van Horn, where we got onto Interstate 10 and took it West to El Paso. Along the way we started seeing black smoke ahead, and that’s never a good sign. We came across the cause of the smoke, a moving van with its rear end on fire. It looked like the driver may have been running on a flat that overheated and caught fire. Fortunately, he was out of the truck and several other truckers were there trying to help, but it looked like the fire was already out of hand. 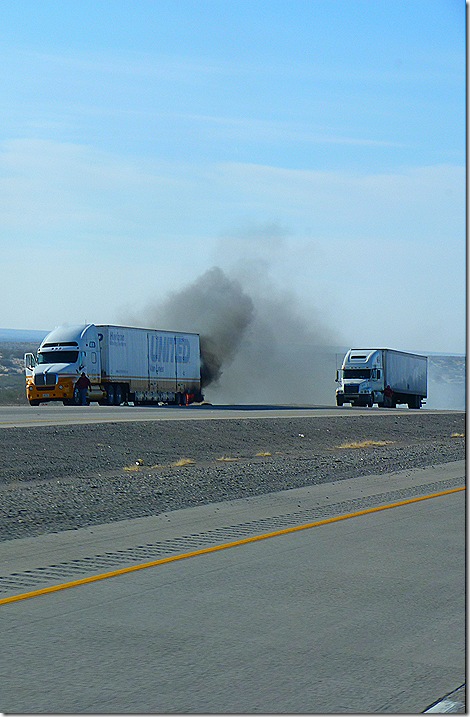 We stopped at the Flying J on the East side of El Paso for fuel, and this was probably the easiest and best Flying J experience we’ve had in a long time. The card reader accepted my credit card and customer loyalty card, I pumped the fuel with no problems, and it even gave me a receipt right at the pump. That’s the way it’s supposed to work! It was still really cold outside, about 50° and it sure was nice to get back inside the motorhome where it was nice and warm.

I never like driving through El Paso because it’s always so busy. But this time around there really wasn’t much traffic at all. I think maybe everybody was at home watching the Super Bowl and that’s just fine with me. We crossed into New Mexico and pulled into Coachlight Motel and RV Park, a Passport America affiliate where $18.50 got us a pull through, full hookup RV site. I was a little apprehensive, because RV Park Reviews had a number of one star reviews of the place. I really don’t see why, it’s not fancy but the gravel sites are level, we had plenty of room to get in and out, and electric was good. What more can you ask for?

Once we were parked and hooked up we drove to La Posta de Mesilla, a Mexican restaurant that my friend Greg White has been telling us about for years. Housed in a 200-year-old adobe building just off the historic square, Miss Terry rated the restaurant among the best of the best anywhere in the country for real Mexican food. Not Tex-Mex, or any of the many variations of what people call Mexican food. This was the real stuff! Besides delicious food, the building itself is a real treat. It has served as everything from a mercantile to a hotel, and back in the old days such famous and infamous people as Billy the Kid, Kit Carson, Pancho Villa, and General Douglas McArthur stayed there. Oh, if those walls could talk!

It was a very long day on the road, 460+ miles. Now don’t go telling me that’s too far to travel in one day. I know, I know! But sometimes you’ve got to do what you got to do. We have about 270 miles to go to get to Tucson tomorrow, and Tuesday morning I’ll be at the VA hospital getting some blood work done and hopefully getting set up with some appointments to take care of some medical issues. I tell you what, getting old isn’t for sissies. But it sure beats the heck out of the alternative!

Thought For The Day – Can you daydream at night?