Ron and Brenda Speidel came by to see us off yesterday morning on their way down to South Padre Island for the Kite Festival. Man, I wish we could’ve hung around to see that, but we had places to be and it just wasn’t going to happen this year. But the great news is, we can always come back again. And yes Brenda, we’ll go back to the Valley again! As long as you keep finding great restaurants for us to go to like you did this time around.

We pulled out of the RV park about 10:30 A.M. and drove a couple of miles to a WalMart parking lot, where we pulled off the road to hook up the Explorer to our Blue Ox tow bar. Then we continued north out of Mission on U.S. Highway 83, hugging the Mexican border all the way north to Laredo. It seemed like one long construction zone from Mission until we were almost into Laredo. The road was pretty rough in a lot of places, and it didn’t help that it rained off and on all the way. We stopped in Laredo for fuel, even though we could only take on about 25 gallons, because out in this part of West Texas, fuel stops can be few and far between.

From Laredo, we continued north to Uvalde, passing mile after mile of nothing along the way. We saw a few hawks, and passed a few RVs that were gate guarding at different oil or gas wells in the area. A lot of RVers have found this to be an easy way to make money while they sit still for a while. In fact, my buddy Greg White and his pretty wife Jan are talking about giving gate guarding a try. There are several blogs about it, and though it’s not for us because of the schedule we have to keep in publishing the Gypsy Journal and running our rallies, I can see where it would be an excellent choice for a lot of people. That is, as long as they don’t mind being out in the middle of nowhere and not having an RV park atmosphere.

The rain had let up by the time we left Laredo, but there was a heavy overcast that made it seem like it was almost twilight even at midday. Here’s a tip for you when you’re driving in those conditions; I keep a pair of cheap yellow lens shooting glasses on the dashboard and put them on at times like these. They make it seem like broad daylight! They also work well at twilight, when we’re only a few miles from our destination and the light is fading fast. They only cost a few bucks at WalMart and are well worth the investment.

I know things are always bigger in Texas, but if this is a golf ball I’m impressed! 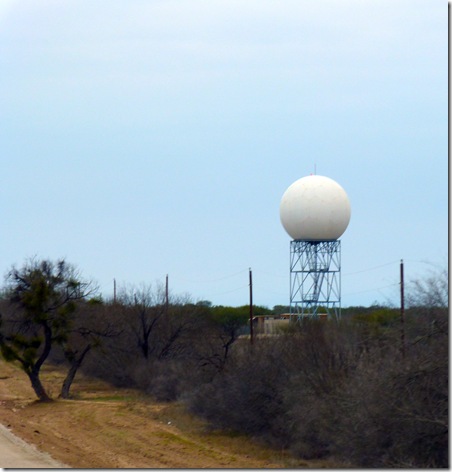 Actually, it has something do with one of the gas wells, but I’m not sure what. Something else I’ve always wondered about is why wells and refineries often have a big flame coming off the top. We passed a couple of those yesterday and one of them was shooting a flame 20 or 30 feet into the air. Somebody told me once they were burning off contaminated gas that would cost more to purify that it was worth, but I don’t know if that’s true. Does anybody out there know the reason they burn it off like that? It seems like such a waste.

Somewhere south of Uvalde we passed this place and it reminded me why we like to live and travel in an RV instead of doing the hotel or motel thing. Hey, I’ve actually spent the night in a few places that were worse than this! 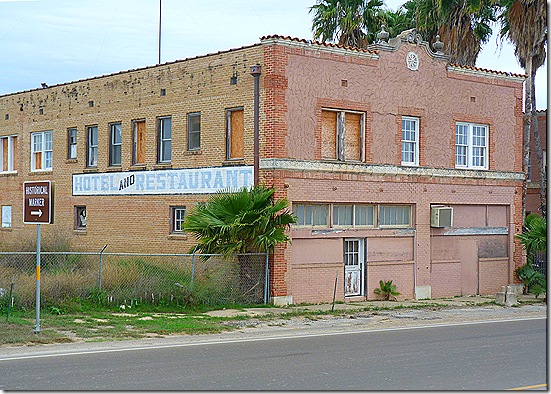 Cowgirl actress and singer Dale Evans was born in Uvalde in 1912, and Vice President John Nance Garner is buried there. Garner served under Franklin D. Roosevelt, and was also the Speaker of the House of Representatives. He had a long history of politics in Texas, and back in 1893 when he was running for Uvalde County Judge, his opponent was a rancher’s daughter named Mariette Rheiner. The West Texas beauty may have lost the election, but she won her opponent’s heart, and two years later they were married. Isn’t it amazing how many cool things you learn by reading the blog and the Gypsy Journal?

From Uvalde, it was another 75 miles west on U.S. 90 to Del Rio. The WalMart at Del Rio has a section of the parking lot marked off for RVs and each long pull through site clearly says RV Parking Only. But it was pretty much filled with eighteen wheelers. How come truckers whine and snivel when RVers park at truck stops or even rest areas overnight, but they have no problem going into a designated RV parking area? One trailer was sitting there by itself, the trucker had dropped it and gone off someplace!

No problem, we hadn’t planned to stay at the WalMart anyhow; we went a couple of miles down the road to Buzzards Roost, a Passport America affiliate, where for $16 a night we got a pull through full hookup RV site. This place isn’t exactly a resort, there are lot of long-term residents, and some of the rigs look like they’ll never make it back out to the highway again. Hey, what can I say? For $16 a night, what do you expect? The owner was very friendly and went out of her way to come outside to greet us and to point us in the direction of our site, and when I went into the office she told me about several places to eat in town, and about some of the local sights.

We had dinner at the Sirloin Stockade and yeah, it was just about as bad as it sounds. Terry and I didn’t actually buy our food there, we sort of rented it on a very short-term basis, if you get my drift. 🙁 Ahh yes, Saturday night in Del Rio, Texas!

We’ll be back on the road again this morning, following U.S. Highway 90 to Fort Stockton, where we’ll get onto Interstate 10 and go as far as we can before darkness or fatigue convinces us to call it a day. We covered about 335 miles yesterday, and still have about 740 to go to get to Tucson. This isn’t leisurely RV travel, we are in “get there” mode and need to be in Tucson sometime Monday. So there will not be a lot of sightseeing along the way.

Thought For The Day – Why do people never say "it’s only a game" when they’re winning?