Sometimes when I’m trying to figure out a problem and get stuck, I find that if I step away from it for a while I come back with a whole new perspective, or the answer may even come to me when I’m doing something else entirely. So it was with the formatting problem I was having with my new book, Big Lake Lynching. I wrestled with it for hours on Monday evening with no luck and finally gave up and went to bed. Sometime during the middle of night the solution came to me, and yesterday morning it only took an hour or so to complete the task. I uploaded the book about 11:30 A.M. and by 6 P.M. it was live on the Amazon Kindle bookstore. I put a notice on Facebook and sent out an e-mail to some of my regular readers, and by the end of the evening I had already sold twenty copies. Check it out, I think you’ll like it. I owe a very big thank you to my friend Dale Roberts for designing the beautiful cover for me, and to Miss Terry and my friends Chris Yust and Kathe Kirkbride for the many hours they put in proofreading the new book and making suggestions to make it even better.

Once I had the book uploaded, we drove into Aransas Pass to visit with our friends Earl and Sami Aeverman for a while, and then we drove out the causeway to take the free ferry across to Port Aransas on Mustang Island. It was a busy day but they had four ferries running, so we only had to wait about fifteen minutes to board. 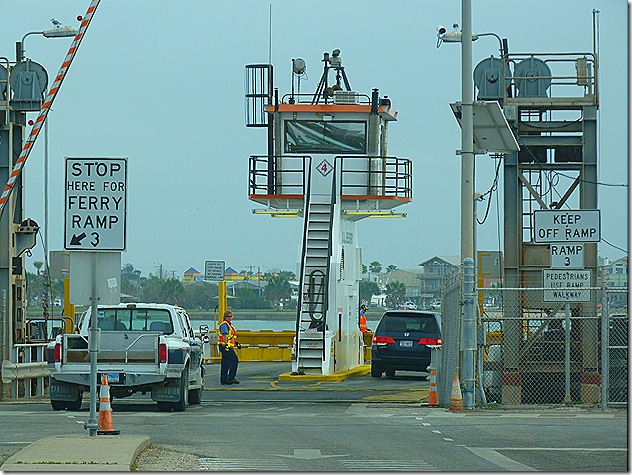 The ferries can carry anything from passenger cars to motorhomes or even an eighteen wheeler. Here is a school bus offloading. 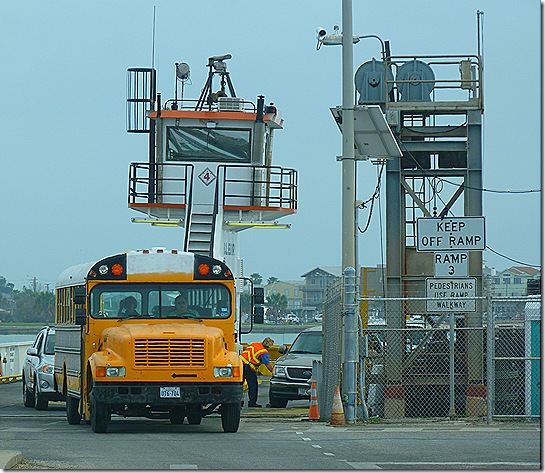 They have added a couple of new ferries since we were here last. Here is one of the new boats. 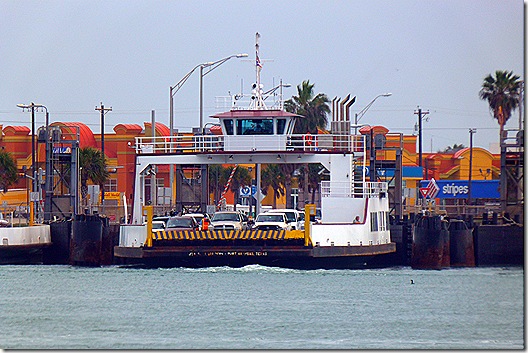 It was also a busy day in the water. This big oceangoing ship passed our bow while we were loading. 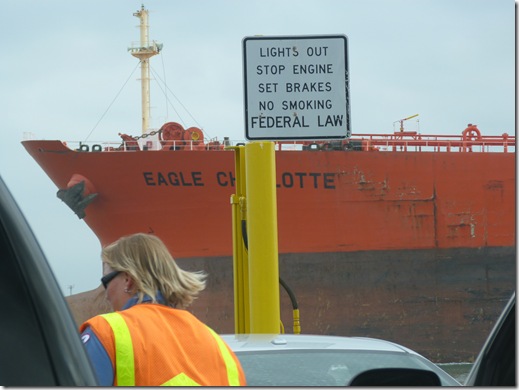 It’s a short ride across the water to the island and once we offloaded we drove out to the beach. You can drive on the beach at Port Aransas, and you can even camp there if you want to. I’ve always wanted to camp on the beach just so I could sleep with the windows open, listening to the surf all night long. 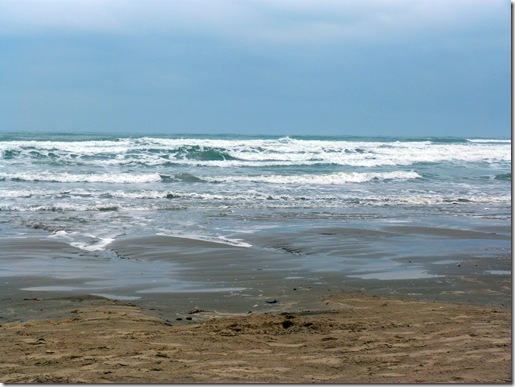 There were quite a few motorhomes parked on the hard sand, as well as some fifth wheels. 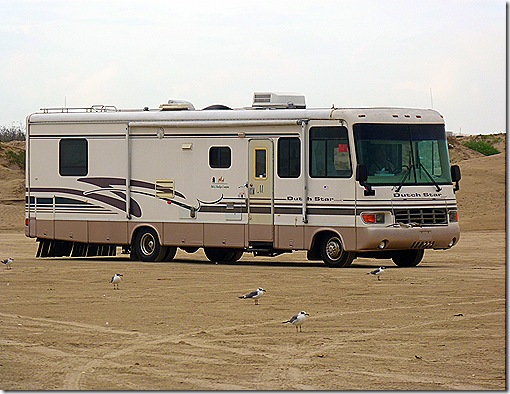 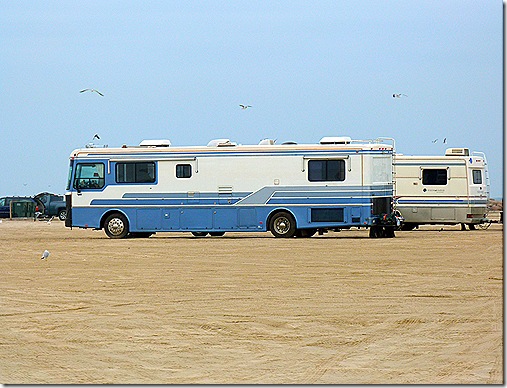 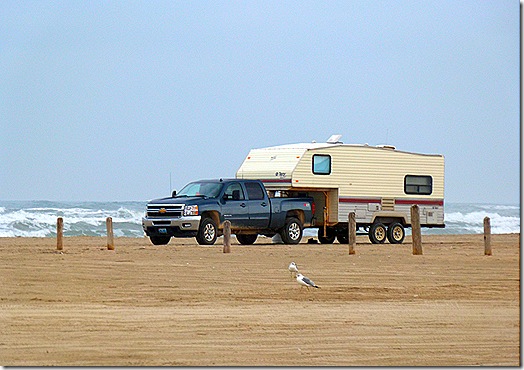 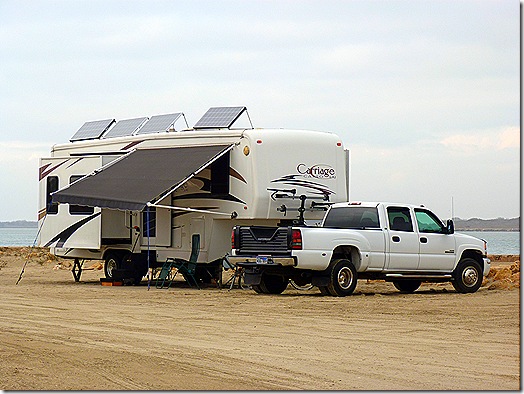 These folks were just enjoying the day, sitting outside their pickup camper. I told Terry I could have a wonderful day just sitting in my Strongback chair reading my Kindle on the beach. Doesn’t that sound relaxing? 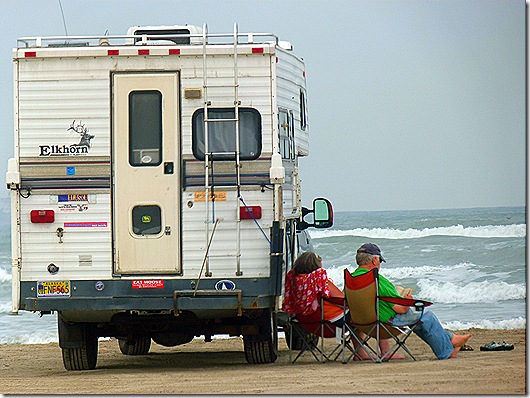 Just walking down the beach holding hands with my baby would be fun too. 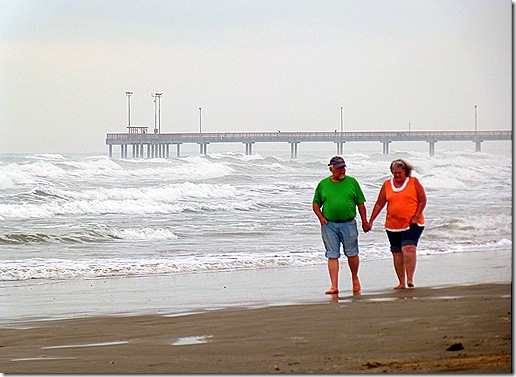 Terry was busy with her camera taking pictures in every direction. She was fascinated by these birds, and when she looked them up online later, she discovered that they are Black Skimmers. 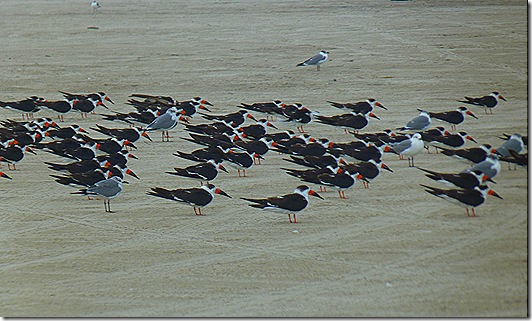 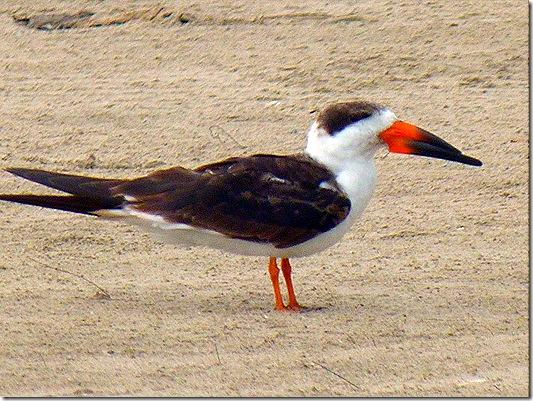 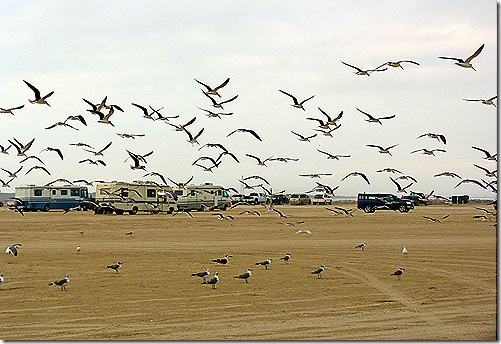 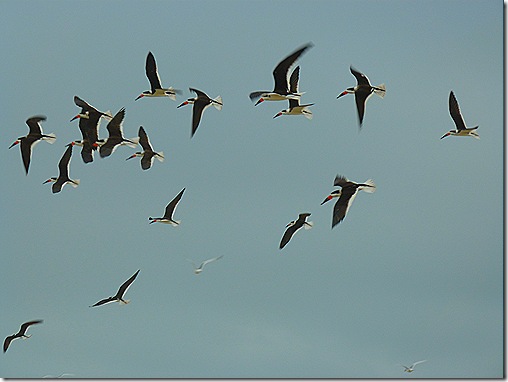 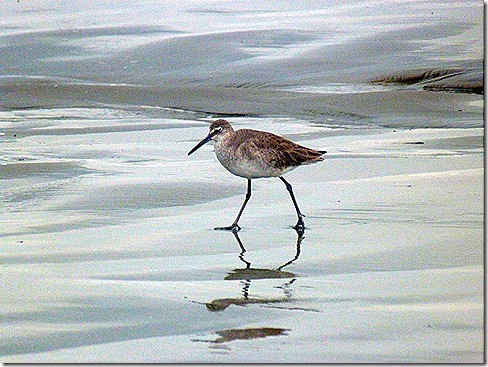 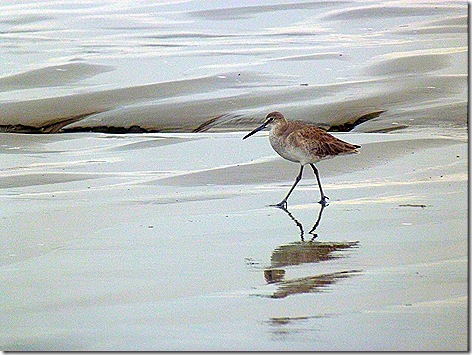 We also discovered this strange looking jellyfish. I’ve seen a lot of  jellyfish in my time, but this one seemed thicker and was shaped differently than anything I’ve seen before. 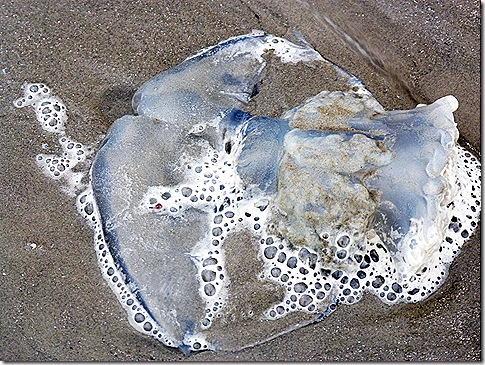 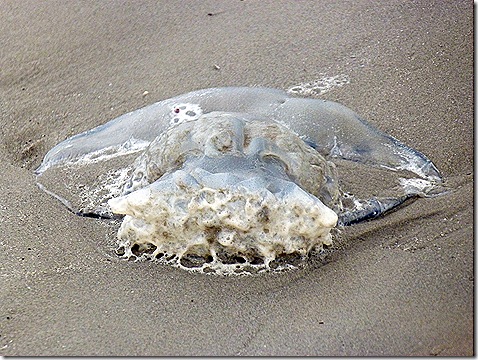 Did I mention that there was a lot of ship traffic out on the water? 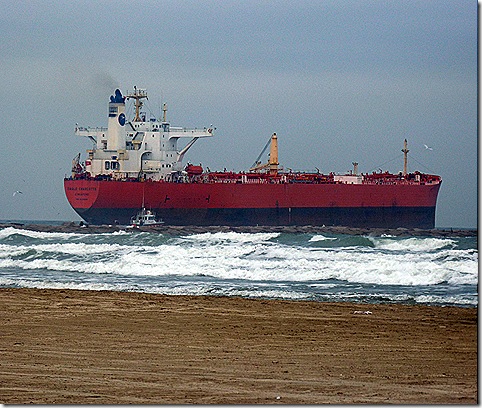 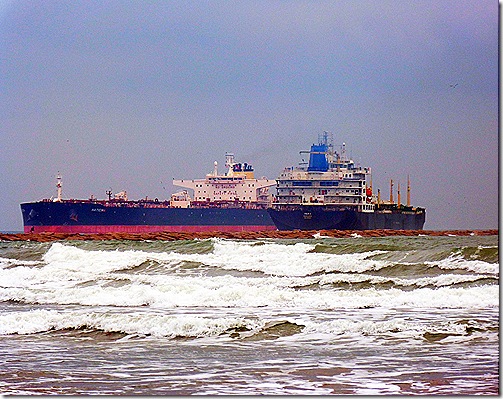 This pilot boat was headed back to port, moving quickly so the professional pilot could get onto the next cargo carrier he was scheduled to take out to sea. 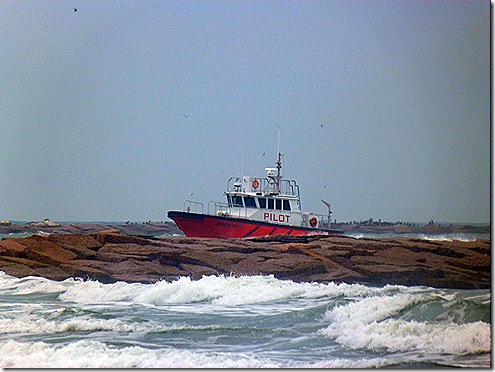 After an hour or so at the beach, we drove through town, and Terry took a picture of these two salty characters standing on a corner. 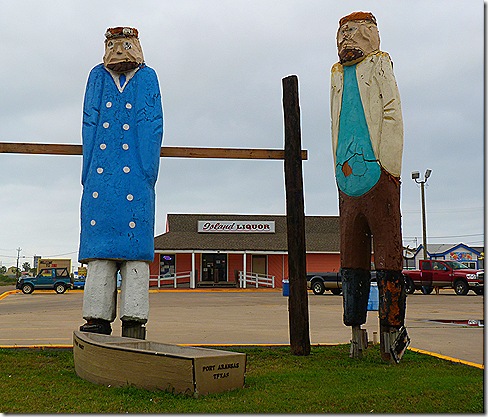 We drove out to Mustang Island State Park, where our friends Barry and Jan Kessler are workamping. Jan was on duty at the gate and greeted us with a big smile and lots of hugs. 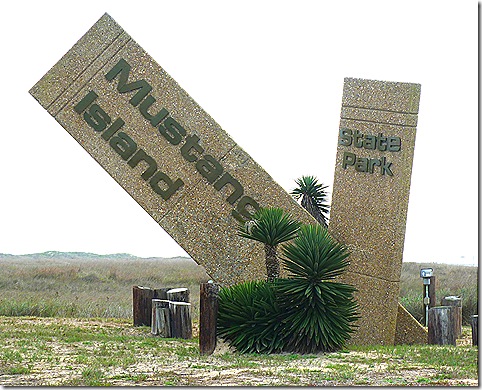 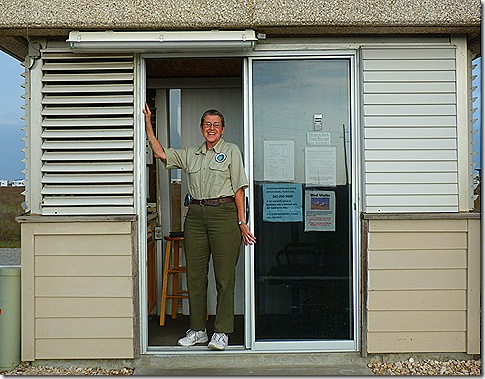 We pulled up in front of their Excel fifth wheel, where Barry was waiting for us with their two dogs, and I got my puppy fix. 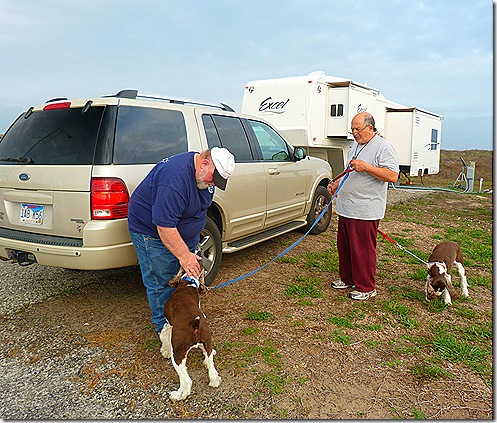 Mustang Island has an RV park as well as miles of beaches where you can camp in anything from tents to RVs. Barry and Jan have been volunteering here for several seasons now and love it. With the ocean right behind them and a combined 24 hour a week commitment in exchange for their full hookup site, what’s not to like? 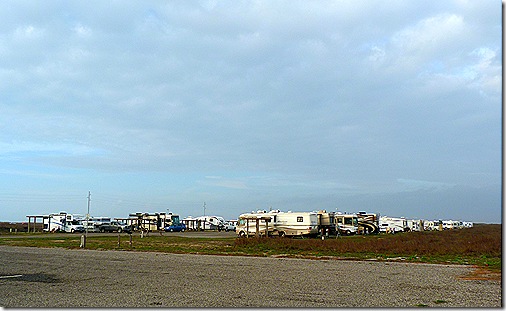 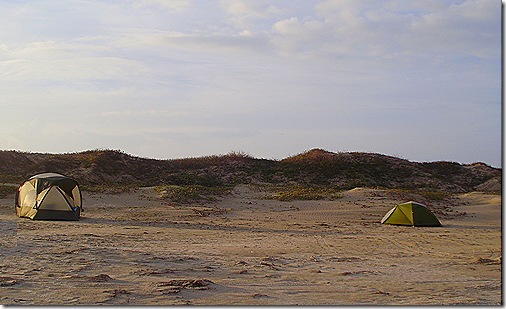 We visited with Barry and Jan for a while, then the four of us drove to a nice little place called the Island Italian Restaurant for dinner. We haven’t seen our friends in several years, so it was nice to have some time to visit and catch up on everything that’s been happening in their lives and ours since we saw them last.

It was about 8 P.M. by the time we got back to our motorhome, and we spent the evening trying to get online with the terrible Verizon service here. It sure is frustrating.

Between the poor Verizon service, the rutted roads in the campground, and the pile driving machine that starts pounding early in the morning, this isn’t a pleasant place to be. But the good thing is, we have wheels under our house and if we don’t like the neighborhood or the neighbors, we can leave! And that’s just what we’re going to do. Today we’ll drive a little over 200 miles to Mission, where we will spend a couple of days visiting with our friends Ron and Brenda Speidel. We haven’t seen those two in way too long and we’re way overdue.

Thought For The Day – Sometimes when life doesn’t give us what we want, it is not because we don’t deserve it, but because we deserve so much more.

12 Responses to “Beaches And Books”