As I’ve written before, I am developing a bit of arthritis in my hands, and sometimes after a long day at the keyboard, my fingers and knuckles just ache. A while back I started researching the Dragon speech to text software to see if that would make life easier for me. For Christmas, I bought myself the Dragon Dictate software for the Mac computer. Then I got busy with other things, and haven’t had time to play with it until yesterday.

After loading the software into my iMac, I started the training procedure that comes with software to teach it to recognize my voice and speech patterns. I was told this could take a while, but was pleased to find that after just a short time, maybe less than ten minutes, the program had learned enough so I could proceed.

There are occasional typos, but so far, no more than I make with my fat little fingers. I’ve always been a two finger typist at best, and I think once I get used to it, this might make me faster and more productive. I wrote, or should I say dictated, this blog post using the Dragon software. There were fewer typos than I would normally make when I’m in a hurry and typing fast. So far, I’m impressed!

One of the things that surprised me is that we can still have the television on, or play music, and it doesn’t seem to interfere when I’m dictating into the microphone/headphone combination I use. So far, I’m liking this new toy! 🙂

Miss Terry was busy all day yesterday proofreading my new book, Big Lake Lynching, and just as fast as she was proofing the pages I was busy making corrections. Terry always uses a red pen when proofing my work, and usually when I get a page back, it looks like it’s bleeding!

By the time we called it a day, sometime well after midnight, she had well over three quarters of the book proofed. The next step will be passing it on to a couple of other volunteer proofreaders and have them go through it. I don’t expect them to be as fast as Miss Terry, but hopefully they’ll get it done and I can get the new book uploaded to Amazon’s Kindle bookstore pretty soon.

During the afternoon, our friend Al Hesselbart stopped by to drop off a package for Miss Terry that we had sent to him, care of Breezy Oaks Campground. It was a beautiful hand sewn apron specially decorated and trimmed just for Miss Terry by our dear friend Thelma Middleton. Thank you Thelma, it’s beautiful, and Terry loves it! 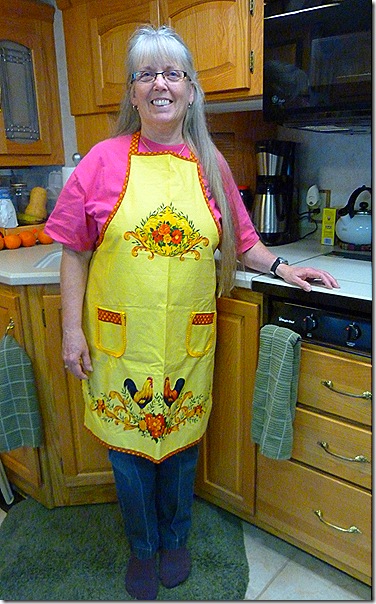 In yesterday’s blog we talked about things that fulltimers miss from their old lives back in their sticks and bricks homes. I wrote that I mostly miss my hot tub. Apparently hot tubs are very popular, because that was one of the most common items mentioned by the folks who responded. I mentioned that occasionally we use RV Park hot tubs, but it’s just not the same. My buddy Greg White left a blog comment that the reason I didn’t like RV park hot tubs is because they make you wear a swimming suit. Oops! Who knew? Now I know why I can’t go back to at least one Thousand Trails campground! 🙂

We’re trying to figure out when we will start our westward trek. I still want to get our Sea Eagle kayaks wet at least once before we leave Florida. I’d also like to get down to the Tampa RV show, which starts this week. And on our way out of the state, we would like to stop at Cedar Key. Last night at dinner, Terry and I both agreed that if it weren’t for going back to Arizona to see our family, and for our Western rally, we’d be perfectly happy to stay right here in Florida all winter.

Thought For The Day – Having a lot of friends on Facebook is like sitting at the cool kids’ table in an insane asylum!

8 Responses to “Taming The Dragon”