My head hurts, my feet stink, and I don’t love Jesus. That’s the title of a song by Jimmy Buffett, arguably the best singer-songwriter in the world, in my humble opinion. After wandering around the Webster Flea Market half the day yesterday, I know exactly how Jimmy B feels, or least two thirds of it. My feet ache, and my neck is sunburned.

Miss Terry dragged me out of bed so early yesterday morning that the neighbor’s roosters were telling me to quiet down. I managed to splash some water on my face, brush my teeth, spray a little foo foo on my body, and I was ready to greet the day. Or, least as ready as I was going to be at that ungodly hour! 🙂

My friend Jack Mayer happened to be walking by our motorhome with his sweet dog, Poppy, when we went out to the Explorer, and poor Jack did a double take, and rubbed his eyes to see if he was hallucinating. Once he convinced himself I really was up and about so early, he stopped and we chatted for a while, and I got to scratch Poppy’s ears. At least I got a puppy fix. That’s something.

When we got to the flea market, we spent three or four hours wandering up and down the aisles looking at all manner of trash and treasures. Miss Terry got lucky, and picked up a couple of items for the kitchen she was looking for, as well as some plates to replace ones that had gotten damaged in our travels.

It seemed like everybody we knew was that Webster yesterday. We bumped into long-time readers Bob and Ellen LaForme, another couple whose name escapes me, and quite a few other familiar faces. Our friends Stu and Donna McNicol were at the flea market, and we managed to touch base and visit for a little bit toward the end of the day. While we were talking, a fellow walked up and said “Hello Miss Terry, and it was Charlie Martin! Charlie is an old bus nut we have known forever. He was there with his wife Connie, and another couple, and we had a nice little reunion standing in the shade of one of the food vendor’s trailers.

Here’s a picture Donna took of Miss Terry and me. Don’t I look tired and sunburned? But it’s worth all that to see that big smile on Terry’s face. 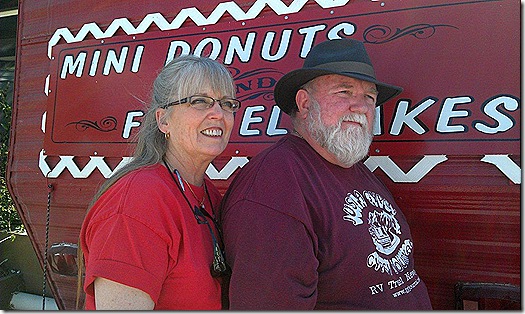 When we left the flea market, we drove into Bushnell to pick up our mail at the post office, made a stop at NAPA to return some coolant I had bought before we drove to Ocala to have Cummins Coach Care look at our heater core. As it turned out, it wasn’t the proper coolant, so I took it back for a refund.

We stopped at the campground long enough to go through our mail, then drove into Brooksville to make a bank deposit. By then our stomachs were growling, so we drove another eight miles to Café Masaryktown. This is one of our local favorites, and has a fantastic Cuban menu. As it turned out, they were celebrating their fourteenth year in business, and had rolled prices back to opening day! I got a fourteen inch Cuban sandwich, and Terry got a roast pork dinner with fried yuca and black beans.

On the way home, we stopped at WalMart and stocked up on some things we needed. Getting back to the motorhome, Terry spent the evening finishing up proofing my new book, Big Lake Lynching, and now I’ll be sending it off to a couple of other proofreaders to have them go through it.

On a whim, I called Jolly Roger Campground in Marathon Key to see if they happened to have any last-minute Passport America openings. As it turned out, they did, starting today for the next five nights. We debated going down there, but decided that it was just too last-minute for us. It’s about 400 miles from Bushnell to Marathon Key, and that would be a very long day of driving in the motorhome. If we could’ve gotten in later in the week, we would’ve done it. Oh well, there’s always next year!

This is going to be a busy week for us. We want to get back to Tarpon Springs, we want to get in some kayaking on the Crystal River, and we want to get down to the Tampa RV show. We are supposed to go back to Ocala to get the heater core installed on Thursday, but I think I’m going to call and see if we can reschedule that, and stop on our way out of the state instead. That will save us 45 miles of driving up there, and then back to Bushnell. With the price of diesel these days, every gallon we can save counts.

Thought For The Day – The reason why worry kills more people than work is that more people worry than work. – Robert Frost