Well, is it over? Have we officially put the holidays behind us? Can life get back to normal now? Or at least whatever passes for normal with us?

When I crunched the numbers yesterday, I was amazed at what my mystery novel, Big Lake, had done on Amazon. In December alone, the book sold 33,539 copies! Wow! I never imagined it would do anything like that. I am putting the finishing touches on the sequel now, and hope to have it out pretty soon. I was aiming for the end of the year, but that just didn’t happen. But I think it will be worth the wait.

Yesterday Miss Terry was in a baking mood, so while I was writing, she was making bread. She doesn’t use a bread machine, I think she thinks that’s for sissies. Terry says kneading the dough helps her work out her frustrations. I think that means when she’d really like to wring my neck for something dumb I did. As you can imagine, we eat a lot of bread at our house. 🙂 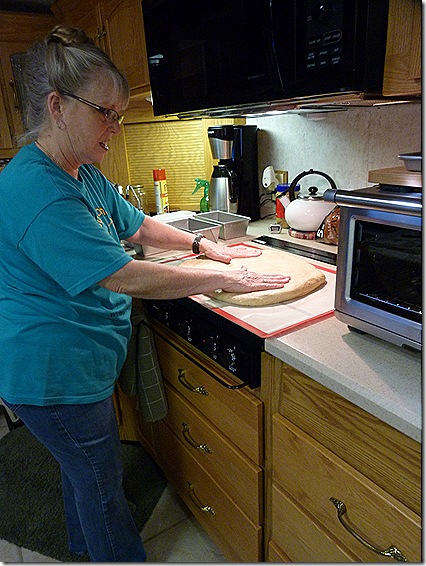 And here is the end result, seven loaves of some of the most delicious oat with flax bread you’ll find anywhere! A real treat for the taste buds. 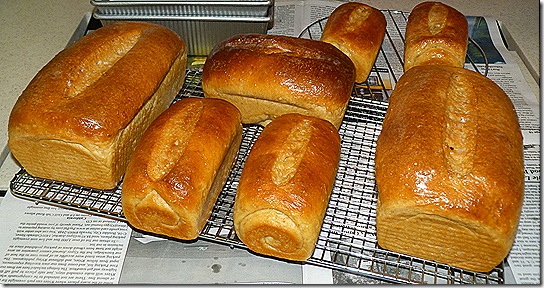 We can’t eat that much bread, but there are always plenty of appreciative people more than willing to take a piping hot loaf off our hands. Terry gave a loaf to Charley, the manager here at Sumter Oaks RV Park, then we drove down to Breezy Oaks Campground, a mile or so west of us, where Bob and Rita Meredith, Al Hesselbart, and John Culp were the lucky recipients of other loaves.

We spent some time sitting around outside Al’s vintage Newell motorhome visiting, and I’ll tell you what, in a group like that, the first liar doesn’t have a chance! I’m somewhat of a bullsh&%t artist myself, but every once in a while I just like to sit back and watch the true professionals at work! That’s Al on the left, me with my back to the camera, John Culp, Rita Meredith, and hubby Bob. 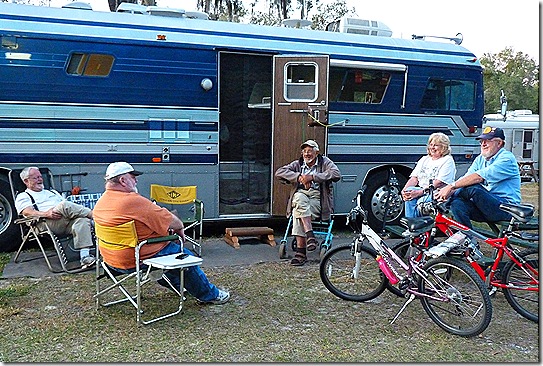 Bob is the artist I wrote about a few weeks ago, who created the Tin Can Tahiti trailer in my Art on Wheels blog post. Al, of course, is the historian for the RV Museum in Elkhart, Indiana, and the world’s recognized expert on the evolution of the modern RV. Al is also the author of  The Dumb Things Sold Just Like That…A History of the RV Industry in America. If you’ve ever wondered how today’s RVs came to be, spend some time visiting with Al, or read his book. It’s a fascinating story.

John Culp is one of the true pioneers in the world of fulltiming. He lives in a 1947 Westwind Coronado travel trailer that his parents bought new, and he and that old trailer have been running up and down for road for 60 years! That’s longer than some of us have been alive! And my, the stories that man can tell! When I’m in the presence of those two, I’m awestruck. We’re talking icons of the RV world here, folks, and I feel very fortunate to call them my buddies. 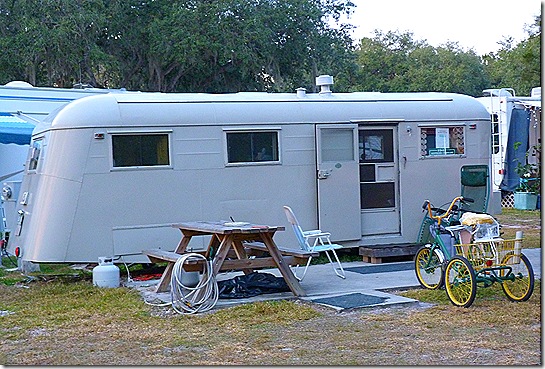 By the time we had solved all of the problems of the world, and no doubt created a couple of our very own, we had worked up an appetite. So Terry, Al, and I drove into Bushnell for dinner at Sonny’s Barbecue, a regional favorite. Our food was delicious, and as we ate, we discussed our plans for future Gypsy Journal rallies, RV travel plans, book publishing, and the state of the RV industry in general. We’d love to have Al come to our rally in Arizona one of these days, but it’s a long way to go to present a couple of seminars.

Back home, I had a lot of e-mail to deal with, so I tackled that while Terry whittled away at the stack of paperwork that never seems to go away. A couple of people have asked me what happened to Bad Nick, and why it has been so long since we’ve had a Bad Nick Blog. To be honest, I’ve been too busy with my other projects to let him near the keyboard. But trust me, Bad Nick is alive and well, and he’ll be back soon, talking about the crazy world we live in, and wondering how the heck we manage to get into the messes that we do.

Today Terry and I plan to go to the Webster Flea Market, something I have been promising her for a couple of years now. We’ve got a cold front coming through, with overnight temperatures predicted at 33 tonight, and down to 27 tomorrow night. It’s going to be great snuggling weather!