The storm system that came through this part of Texas was downright wicked! Tuesday night the wind started blowing, the rain started pouring, and there were a few times I thought our motorhome might just take flight. It wasn’t a very restful night! Yesterday morning was just as windy, but at least the rain stopped by midmorning. I walked up to the dumpsters to throw some trash away, and was I beginning to wonder if the wind might pick me up and deposit me in Dickinson Bayou!

About 11 A.M. Greg and Jan showed up at our door with some delicious, freshly baked croissants that just melted in our mouths. Talk about a great way to make visitors feel welcome! Thanks, Jan.

While they were here, I had Greg set up my Garmin 465T truckers GPS so it would work with the Bluetooth on my Droid Incredible phone for hands-free calling when we’re on the road. I don’t like talking on the telephone when I’m driving, but if I have to for some reason,. at least I can keep both hands on the wheel now.

The weather was so bad that we decided to spend the day hanging around the motorhome rather than brave the elements. Terry’s mother, back in Arizona, saw the news reports of tornadoes in some areas around Houston and called us to make sure we were okay. We assured her we were safe and quite a distance from the area the news reports were talking about.

During mid-afternoon, longtime blog reader Rudy Legett came by to introduce himself and we chatted for quite a while. We’re going to try to get together with Rudy for lunch today, and we’re looking forward to getting to know him better.

It looks like my bubble has burst! For over a month my mystery novel, Big Lake, has been selling 1000+ copies a day. I don’t know what happened yesterday, but sales absolutely tanked. By 4 P.M. I had less than 100 sales, and though I got a few more by the end of the day, it was still much, much less than what we have been seeing. I expect sales to fluctuate and I know that sooner or later they’re going to taper off, but this wasn’t a tapering off, they fell like a rock! Oh well, what can you do? Hopefully today will be a better day.

Everybody has been asking me when the sequel, Big Lake Lynching, will be available. If all goes according to plan, I think it will be uploaded to Amazon’s Kindle bookstore any day now. We will also have it available on Smashwords.com for the folks with Nook e-book readers.

About 5 P.M. we all piled into Greg’s truck and drove to a nearby restaurant called Stomps, which is famous for their giant hamburgers. This was another winner! Look at the size of this hamburger! Now I’m a big eater, but even I couldn’t finish this thing. And it tasted as good as it looked. 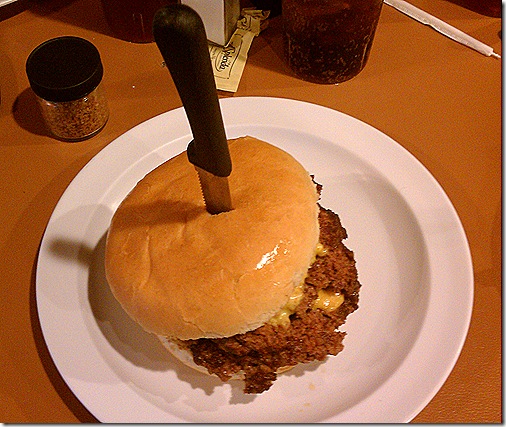 After we finished eating, we stopped by Greg and Jan’s daughter’s house to meet Brandi, her husband Lowell, grandbaby Landon, and Lowell’s sister Sherry. We’ve heard so much about them that we already felt like we knew them, and after visiting with them we feel like a part of the family!

While we were there I also picked up the proof copy of the printed edition of Big Lake which had been delivered to their house. I’m very pleased with the way it came out, and it should be available on the Amazon.com website in the next few days. But if you’re a real hurry to get it printed copy, you can order it right now now from Create Space at this link.

Thought For The Day – If pro and con are opposites, wouldn’t the opposite of progress be Congress?

8 Responses to “Bad Weather On The Bayou”