It rained again Saturday night and it was still raining when we got up at 7:30 yesterday morning. Why must I keep getting up so early if it’s too ugly to do anything? What’s up with that?

Fortunately, by 9 a.m. the rain had stopped and all we had was a heavy overcast. We took our time getting ready to leave Rainbow Plantation in Summerdale. About 9:30 I unhooked our utilities and went over to the office to pay our bill. When I came back, Miss Terry had already started the engine, pulled in our slide rooms, had the jacks up, and was putting away the wooden jack pads. I sure like having a wife who isn’t afraid to get her hands dirty and help with the chores when we’re getting ready to roll. But don’t get any ideas honey, that doesn’t mean I’m going to help with any chores when we’re parked and sitting still! 🙂

My friend Jack Mayer came by with his dog Poppy, to wish us safe travels and so I could get my puppy fix before we hit the road. As we were hooking up the Explorer to our Blue Ox tow bar, Jay Lester stopped to say hello. We have not seen Jay in a long time, so it was nice to see him, even if it was for such a short time.

We left the campground a little before 10:30 and when we got onto Interstate 10 in Daphne, we were surprised at how heavy the traffic was for a Sunday morning. It was very foggy crossing the causeway over Mobile Bay but traffic moved along at a steady pace with no problems. I was hoping to see the battleship Alabama, which is permanently on display in Mobile Bay, but it was hidden by the fog. 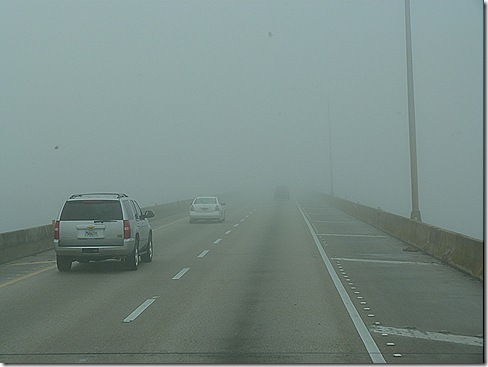 I’m always amazed when we take Interstate 10 through this area. You’re driving along and the city is there in front of you, then you go through a tunnel and when you come out the other side, the city is behind you! How cool is that? 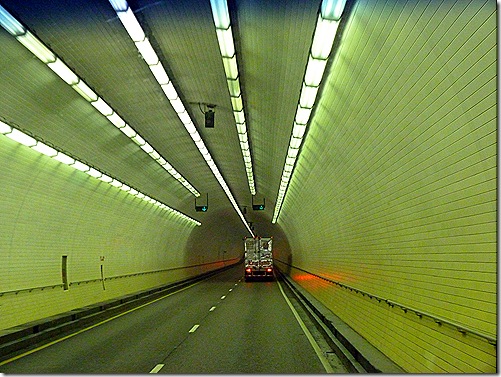 Traffic was heavy most of the day, but there weren’t many slowdowns and we made good time. 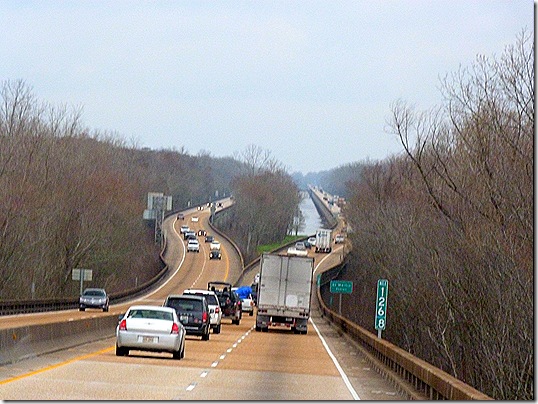 We stopped at the Flying J in Gulfport, Mississippi for fuel, which was $3.66 a gallon with our Flying J/Pilot frequent fueler card. Back on the highway, we continued west into Louisiana, running under heavy clouds and occasional patches of fog. 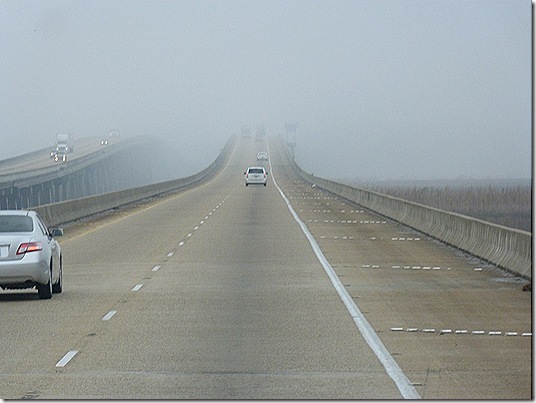 We took Interstate 12 north around Lake Pontchartrain to avoid the New Orleans area and reconnected with I-10 in Baton Rouge, where we crossed the Mississippi River on the high, wide, Horace Wilkinson bridge. This is the highest bridge on the Mississippi, but it is three lanes wide, so I just stayed in the middle and stared at the rear end of the camper in front of me until we were down the other side. 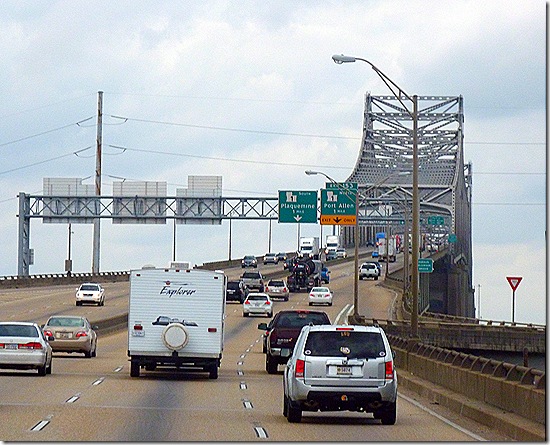 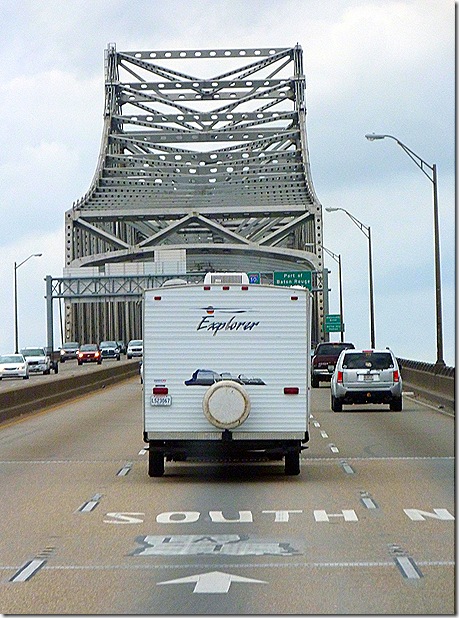 Terry got a picture of this riverboat as we were crossing the bridge. 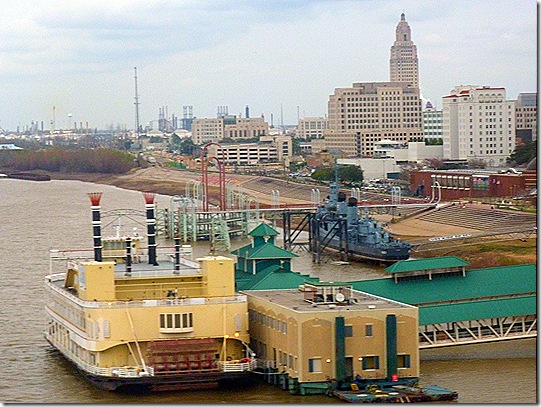 Between Baton Rouge and Lafayette, we crossed the Atchafalaya Bayou on another long causeway and had more fog to deal with. This area always looks flooded, but I guess that’s just its natural state because it always looks the same every time we travel through here. 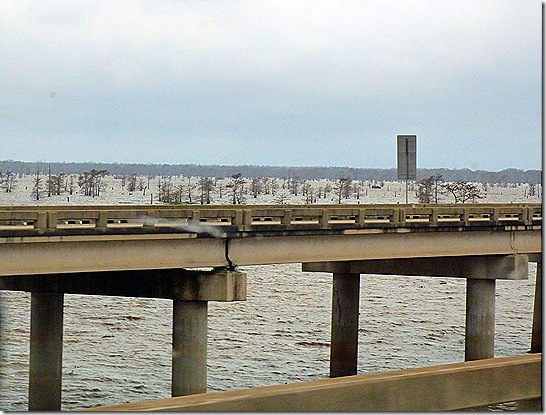 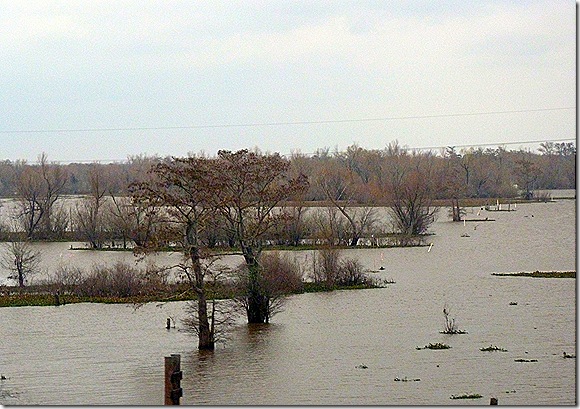 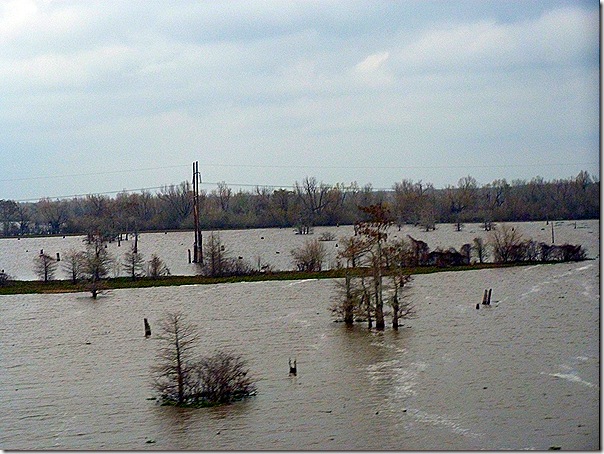 People talk about how rough Interstate 10 is across Louisiana, and there were a few rough patches, but overall it’s no worse than Interstate 40 across northern Arizona and New Mexico, or a lot of other roads we have traveled. It’s sure a lot better than it was back when we first started fulltiming 13 years ago! 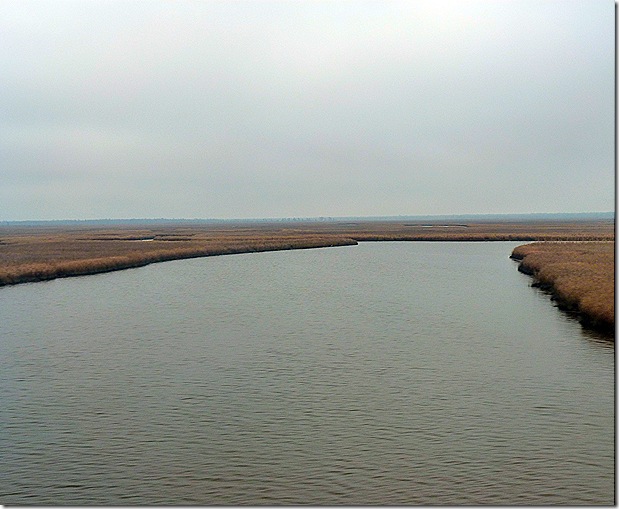 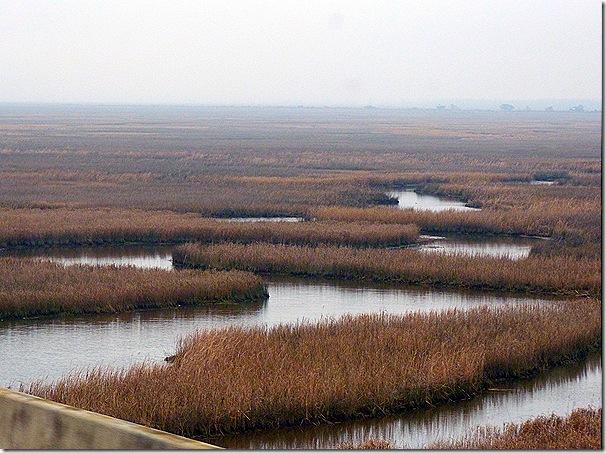 We were not sure where we’d end up at for the night but had several options, including the RV friendly WalMart at Beaux Bridge, the Passport America campground at Rayne (better known as Frog City), or several truck stops and casinos along the way. But it was a good day for driving in spite of the occasional fog and mist and we decided to push on for Lake Charles. The last 40 miles or so, a stiff wind had come up and we got bounced around a little bit, but nothing too bad.

We had to cross another high bridge in Lake Charles, but there was construction on the bridge and the traffic was down to one lane in both directions. Fortunately it was the inside lane, which I appreciated. 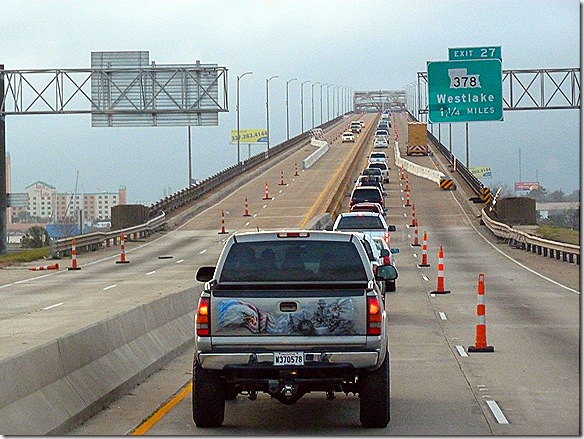 Here is a bit of trivia I just discovered; a fellow told me that metal dueling pistols are incorporated into the design of the bridge and help support the guardrails. In fact, there are supposed to be 10,572 of the pistols on the bridge. Here is a picture of them he sent me. I have driven over this bridge many times and never knew that! Did you? 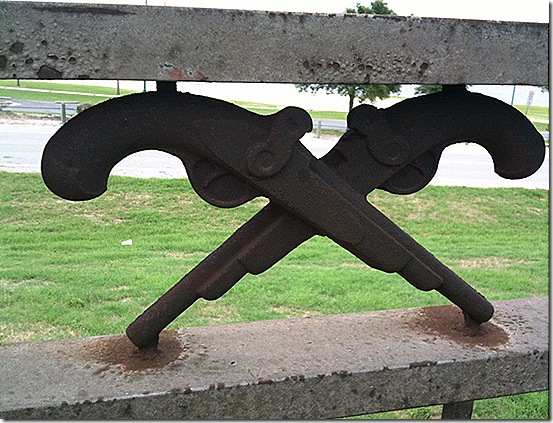 We parked at the Isle of Capri Casino, just under the western edge of the bridge. They have RV sites with electric for $5 a night, or you can dry camp for free in a paved, well lighted lot. I talked to the security guard, who said they are on duty in the lot all night long to keep anyone out who doesn’t belong. There is some traffic noise from the bridge and highway, but it’s not too bad. 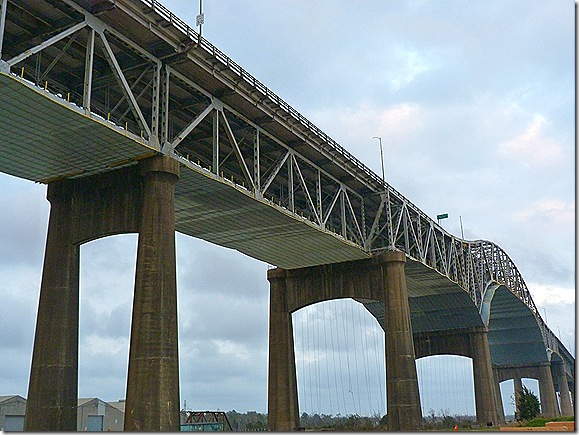 We covered 355 miles, which seems to be our style even when we say we‘re going to travel at a slower pace. What can I say? It works for us. We’re only about 145 miles from our destination, Galveston Bay RV Resort, in Dickinson, Texas. We’ll hang out there a few days visiting our friends Greg and Jan White, and with any luck at all, I’ll break something while we’re there and Greg will get to fix it. 🙂

Thought For The Day – An apology is a good way to have the last word.