If you ever thought that Florida is all beaches and palm trees, you were wrong. There is a lot of agricultural land (where do you think all those oranges come from?), as well as lots of forests. And there are small and large lakes everywhere you look, as well as a number of rivers.

State Highway 50 between Clermont and Interstate 75 is a long, straight road that passes through a couple of small towns, and lots of rural land. 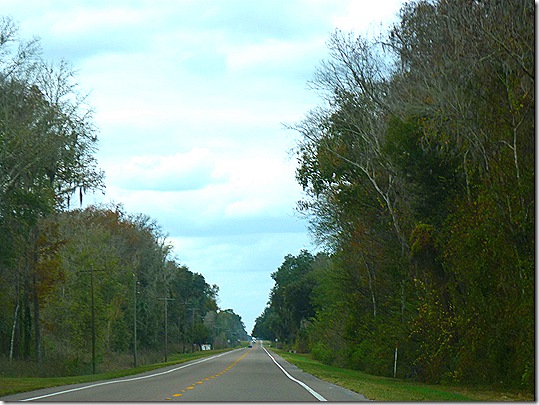 When we passed by here last week, Terry said she saw a sign about Merle Haggard on a fence, as well as another that said Visitors Welcome. I thought that the country music star was an Oakie turned California boy, and even if he did live in central Florida, would he advertise it and invite the entire world to stop in for a visit?

Well, the mystery was solved when we drove past again yesterday. The sign is actually for a miniature donkey named Merle Haggard Jr., the star of the Dinkie Donkies miniature donkey farm. Apparently a lot of people are fooled by the sign and stop to meet the country music troubadour, and some won’t believe that he doesn’t really live there. 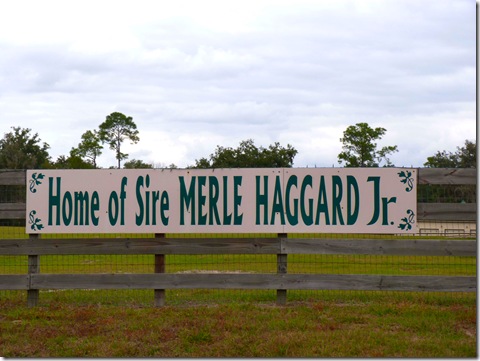 Yesterday we drove on Highway 50 back to the Escapees Sumter Oaks campground near Bushnell, to pick up some mail that was there waiting for us, and to drop off a bundle of sample papers of the new issue of the Gypsy Journal. Usually the campground does not accept regular USPS mail; but these items originally were supposed to come by FedEx, and be delivered while we were there. Somehow wires got crossed somewhere, and the manager graciously agreed to hold them for us once they arrived.

There were several ladies sitting together and visiting over coffee in the activity center, and the papers was a big hit with them. 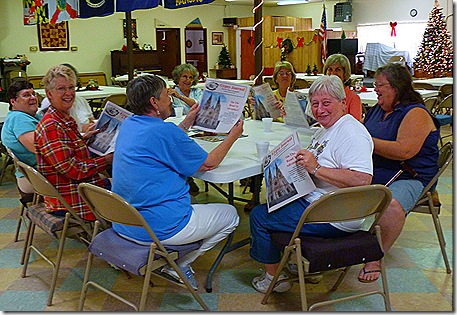 When we left the Escapees campground, we drove a mile or so down the road to Breezy Oaks, a Passport America affiliate, to drop off more sample papers, and to say hello to our friend Al Hesselbart, historian for the RV Museum in Elkhart, Indiana.

There are a lot of jam sessions held at the RV parks around Bushnell, and Breezy Oaks hosts two a week. We arrived right in the middle of the festivities, and those folks up there had a lot of talent! 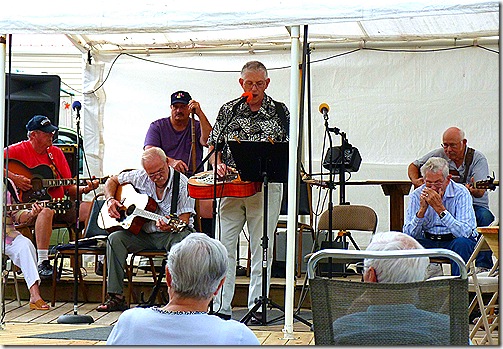 While we were visiting with Al, we spotted the Breezy Babe, the campground’s propane tank, which has a personality all its own. I bet she and Merle Haggard Jr. could make beautiful music together! 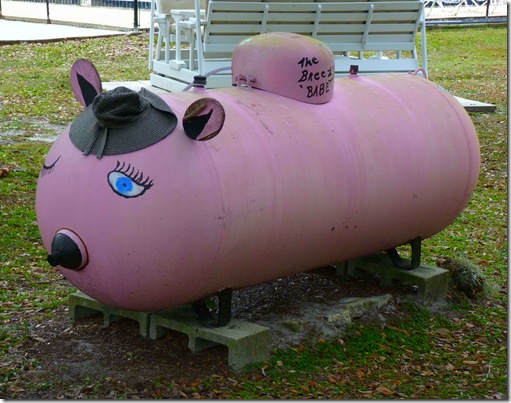 Back home at the Thousand Trails campground, Miss Terry broiled me a delicious steak in her new Breville toaster oven, and seared herself a tuna steak. I’m a beefeater, and cholesterol be damned,  but Terry gave me a bite of her tuna and I was really impressed. Terry says it will take her a while to get familiar with this new kitchen tool, but I think she did a darned good job already!

After dinner, I spent a few hours working on the sequel to Big Lake. I really hope to get it out by the end of the year, but the darned story keeps going off in different directions I had not planned on, and all I can do is follow along to see where it ends up. Sales of Big Lake have remained strong, and as of yesterday, it has been in the upper end of Amazon’s Top 100 paid Kindle books for fourteen days in a row.

If you’re looking for a good read, check out Irrefutable, by Dale Roberts. Available in both Kindle format and as a printed book, it’s a detective tale with enough twists and turns to keep you turning the page (or pressing the buttons on your Kindle) to the very end. I really liked it, and I think you will too.

Sad news out of Slab City, that dry campers’ haven near Niland, California. The Bayfield Bunch RV blog reports that Leonard Knight, the eccentric folk artist who built Salvation Mountain at Slab City, has been hospitalized, and it does not look like he will be returning to his man-made mountain again. We met Leonard years ago, in our first months on the road, and he truly is a unique and charming character. We’ll keep him in our prayers.

Thought For The Day – A diplomat is a man who always remembers a woman’s birthday, but never remembers her age.

One Response to “Merle Haggard And The Breezy Babe”