Am I the only one who is glad that Christmas is over? I enjoy the holiday music, and whatever little sliver of true Christmas spirit that remains, but the commercialism and frenzied shoppers drive me nuts. I’ll be glad to get back to normal. Or at least whatever passes for normal in our lives.

Yesterday Terry and I had a quiet morning, just enjoying each others’ company. About 11 a.m. her mom called from Arizona, and they talked for a while and exchanged Christmas greetings. Then we spent some time listening to Christmas music on TV and answering a huge number of Merry Christmas e-mails. I called my cousin Berni Frees up in Muskegon, Michigan and talked to her for a few minutes, enjoying the fact that we had the air conditioning on, and she had snow on the ground.

About 2 p.m., Dave and Jean Damon came by to pick us, and we went off in search of a Chinese buffet for dinner. We found one on U.S.192 in Kissimmee called Ichiban, and they were pretty busy. Most of the customers were Asian, and I figured if you find a Chinese buffet where the local Chinese people eat, it’s probably pretty good. I was right, it was one of the best we’ve been to anywhere. The selection was impressive, and everything was hot and fresh. We all stuffed ourselves until it was obscene, and had a good time visiting over our meal.

Besides being an excellent masseuse, Jean has a talent with crafts as well. She presented Miss Terry a beautiful bracelet she had made her for Christmas. Thanks Jean, Terry loves it. 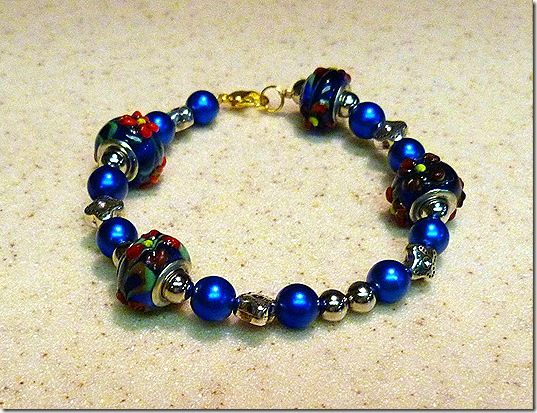 Back at the campground, I had more e-mails to answer, and then I spent a while answering questions sent to me by an independent publishing blog from New Zealand that wanted to do an online interview. Speaking of publishing, it was a roller coaster day for Kindle books. My mystery, Big Lake,  spent 23 days in the Top 100. A week ago it was #23, Friday it was #36, yesterday afternoon it had dropped to #69, and by 10 p.m. it was #95, which is up from #98 a couple of hours earlier. Sales Christmas Eve day were off by about 15%, but they rebounded yesterday, and it was one of my best days ever. But still the book’s rating was dangerously close to being edged out of the Top 100. Go figure.

I was honored and humbled by the following comment about my book, posted on the Kindle Author/Publisher Forum:

During the evening, my daughter called from Arizona, and Wil Olsen came by to pick up a bundle of papers to drop off in his travels. I also called my pal Greg White to wish him a Merry Christmas. All in all, we couldn’t have asked for a nicer Christmas Day.

Today we leave the Orlando Thousand Trails for the Escapees campground near Bushnell for a week or so. And from there? We’ll have to shake up the Jello our plans are set in and see. Time will tell.

Thought For The Day – You can get anything you want in life, if you are willing to help enough other people get what they want.

4 Responses to “I’m Glad That’s Over”