We could have spent weeks exploring Savannah, but we were expected in Florida, so about 11 a.m. yesterday morning we left Hardeeville RV Park, just across the state line in South Carolina, and hit the road for our final run to Titusville. When we pulled onto Interstate 95, I told Miss Terry that I didn’t plan to shut down the engine in our motorhome until we hit 70 degrees!

We had an easy run south, passing lots of waterways that ranged from small canals, to rivers, wide open bays, and extensive wetlands.Who knew Georgia had so much water? 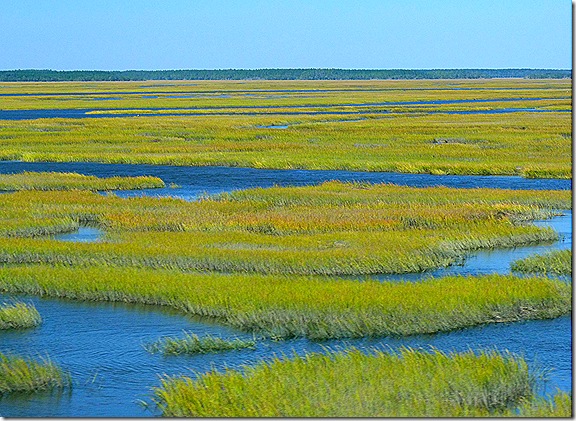 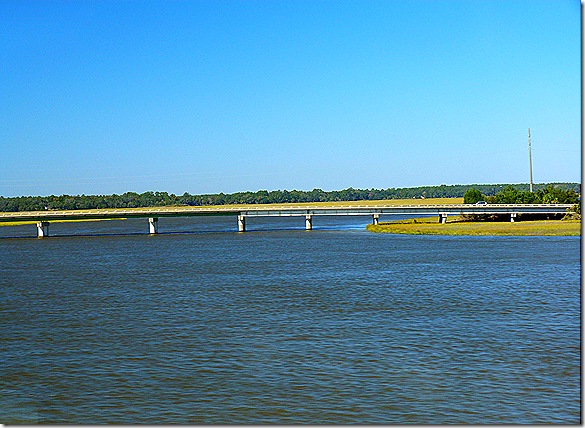 We crossed the Florida state line, and almost immediately, my wish was granted. The digital thermometer on my dashboard was showing the outside temperature was 76 degrees! YES! 🙂 I celebrated by stopping at the State Welcome Center, where I had a sip of their complimentary orange juice and picked up a handful of tourist brochures. And yes, I shut off the hard working Cummins diesel engine while we we were stopped! 🙂

The trees along the highway in Florida sure were different than what we had seen in the Smokey Mountains just a couple of days ago! 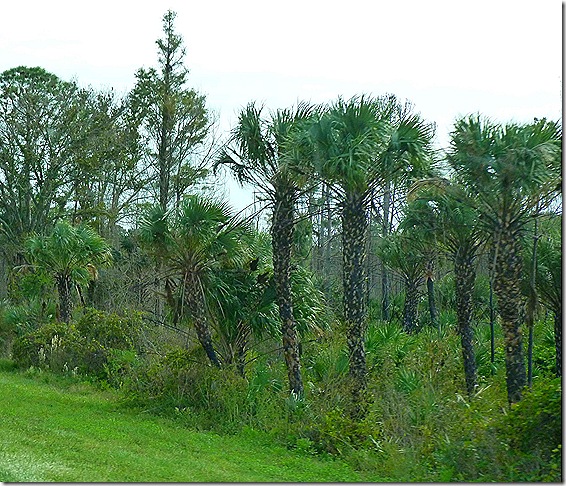 It was a bit windy all the way, and the wind really picked up between the state line and Daytona Beach. We took the I-295 bypass around the west side of Jacksonville, and when we crossed the bridge over the St. Johns River, one strong gust hit us broadside right at the top and gave me a thrill I really didn’t need. 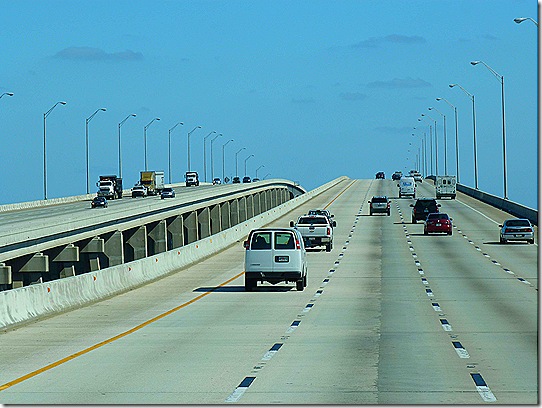 When we are not going to be traveling around a lot for a period of time, especially in colder weather, I prefer to have a full tank of fuel to eliminate the possibility of condensation. We stopped at the Flying J near St. Augustine to fill the tank, and once again I wonder why I keep forgetting that the three cent a gallon discount they give on fuel with their customer loyalty card is not worth the hassle.

The pump at the RV island was so beat up that we had to try several times to get it to read our card, and when it finally did, it was incredibly slow. But eventually I got up to $150, then it cut me off. We tried to activate the pump again, and it wouldn’t do it until Terry went inside to pay the cashier. It took us over a half hour before we got done and out of the place! And then, when we finally got filled up and back out on the highway, we discovered that we didn’t get the RV  discount on the first (and largest) transaction! I pumped in a total of 57 gallons, so even if I got the discount on all of it, we’re talking $1.71. My time is worth more than that.

We got to The Great Outdoors in Titusville at 5 p.m., having covered 305 miles by the time we got backed into Peter and Connie Bradish’s lot. I was worn out from fighting the wind all day, and the 1200 miles we had traveled since we left Elkhart, Indiana on Thursday. Once we were parked and hooked up, Terry drove us into town for dinner at Dixie Crossroads, one of our favorite seafood restaurants anywhere. Their rock shrimp are delicious! After dinner, it was back home to answer e-mail, watch some television, and just relax.

We’ll be here a couple of weeks, and we’re looking forward to visiting with some friends in the area, doing a little sightseeing locally, and just hanging out. But today, we plan to do a whole lot of nothing. We’ll sleep in, do a couple of chores around the motorhome, and not much of anything else.

Oh yeah, we’ll also soak up a lot of that Florida sunshine! It feels good to be warm! 🙂