After spending Thursday working at my computer most of the day, yesterday I needed a break. So in the afternoon we drove out to the Canaveral National Seashore and Merritt Island National Wildlife Refuge in the hope of spotting some alligators. I saw my first (and only) alligators in the wild there a couple of years ago, and I wanted to see some more of the prehistoric reptiles.

But when we stopped at the Visitor Center to pick up a map, the lady at the counter told me that many of the gravel/shell roads where the best wildlife viewing opportunities are found are flooded out due to recent heavy rains. She said that between that and yesterday’s cooler temperatures (yes, Nick is in Florida), the chances of seeing any alligators were slim. However, she suggested that we drive a few miles to the manatee viewing area at Haulover Canal instead, where several of the huge aquatic mammals can usually be spotted. 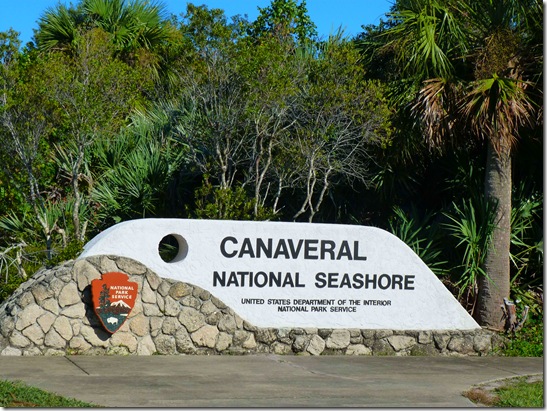 Manatees are gentle giants that tip the scales at up to 2,000 pounds, and can grow to twelve feet in length. They eat 150 – 200 pounds of sea grasses and other aquatic plants every day, and gather in the shallow water of the canal much of the year. We had seen manatees once before, at the Homosassa Springs Wildlife State Park several years ago, and seeing more of them was on our bucket list. 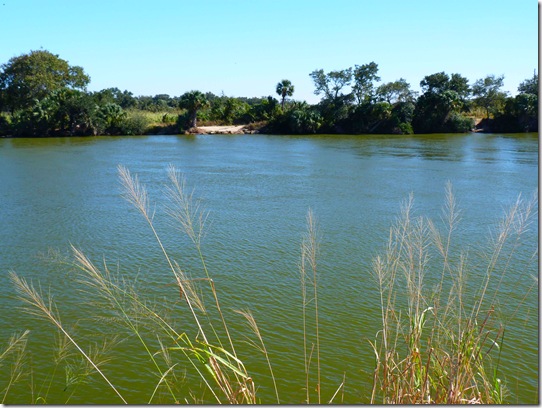 There were a few people at the viewing area, which is next to a drawbridge, and they said they had seen one manatee an hour or so earlier. It was windy and chilly, but we decided to hang out for a while and see if we could get lucky. 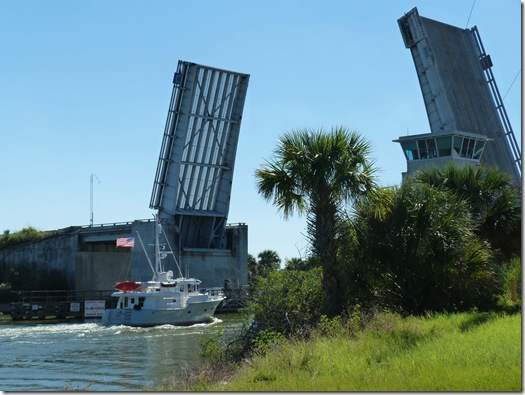 And sure enough, within about fifteen minutes, Terry spotted a “boil” on the water’s surface, and a moment later a manatee’s tail broke the surface, then slipped back underwater. 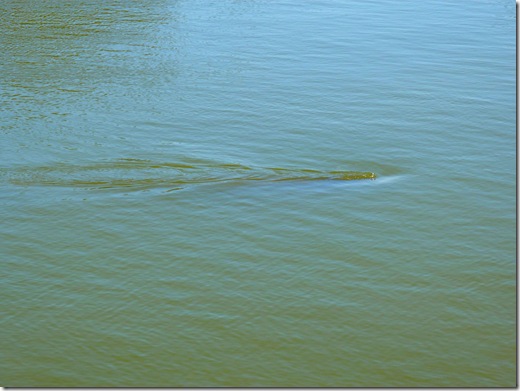 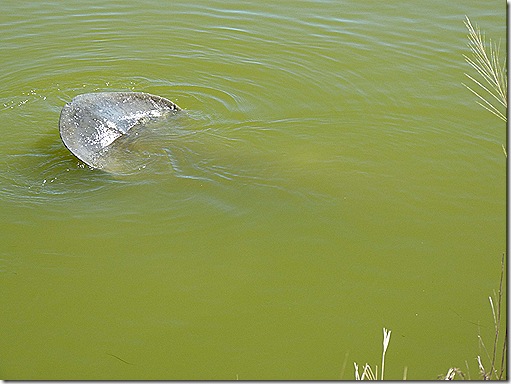 You usually don’t see the entire animal, because they don’t breech like a whale, but a few minutes later, we saw more of the tail. then we saw a couple more boils and realized that there were at least two animals swimming just offshore. This isn’t unusual, since manatee are social animals and are usually sighted in groups. 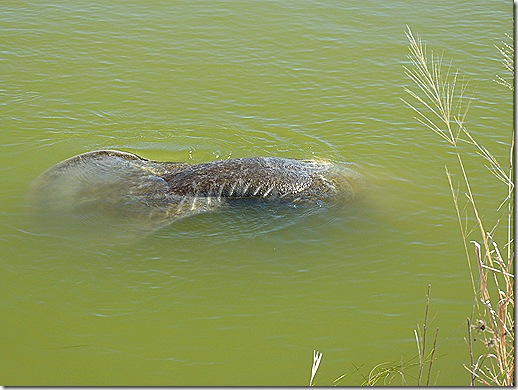 And then one came to the surface and poked its nose out for a few seconds, just long enough for Terry to get a picture. We were thrilled. 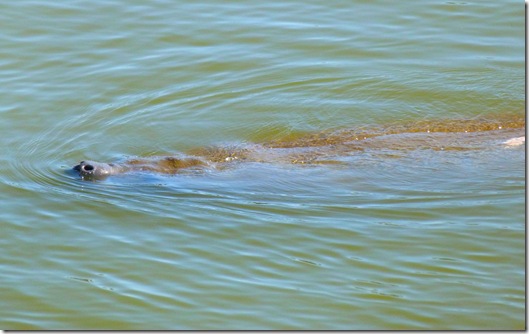 We waited a while longer, but didn’t see any more manatee, so we drove out to Playalinda Beach and watched the waves rolling in for a while. There are a dozen or so paved parking areas along the beach, and apparently the northernmost one is an unofficial nude beach, but we didn’t venture that far. Each parking area has a porta-john, and at least one had marked RV spaces. Wooden boardwalks lead over the dunes to the beach. We watched a couple of surfers paddling around, waiting for the perfect wave, and a few beachcombers, until the wind got to be too cold and we retreated to the Explorer. 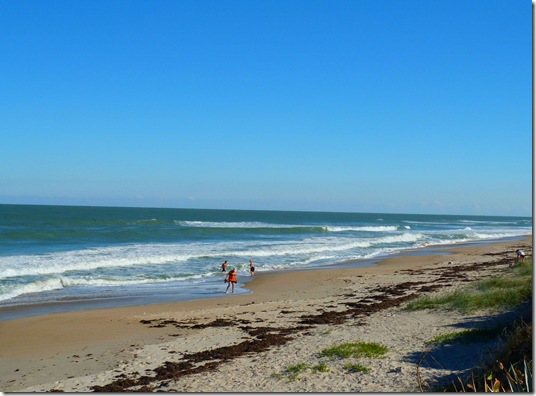 It was getting late in the day, but we were hoping to spot at least one alligator, so we took a chance and drove the seven mile Black Point Wildlife Drive loop.There was water everywhere, and shore birds were everywhere we looked. Terry’s Panasonic Lumix FZ-40 camera got a real workout, and she was snapping away in every direction. 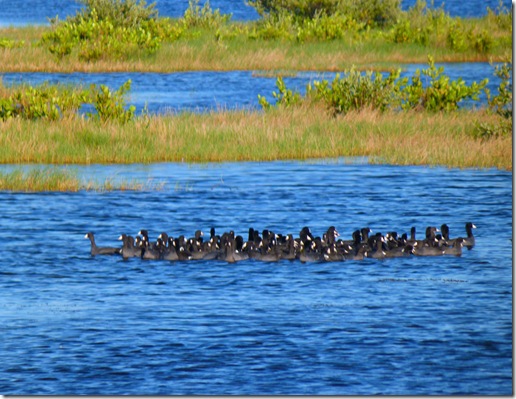 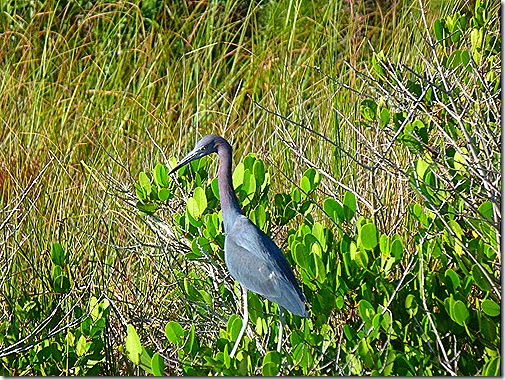 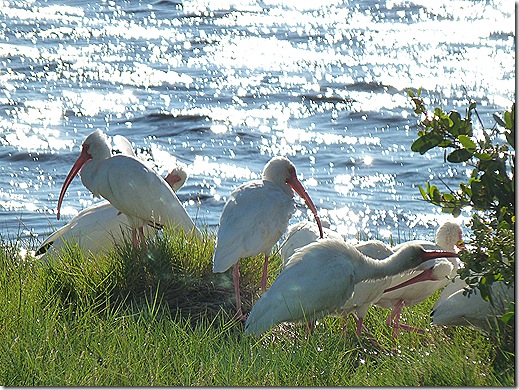 This is a beautiful place, and we had a wonderful time just poking along on the one way road and enjoying the scenery. We only encountered a couple of other cars on the entire drive, so we could take our time and stop whenever we wanted to. 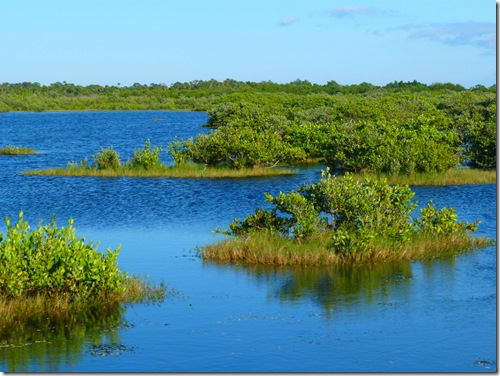 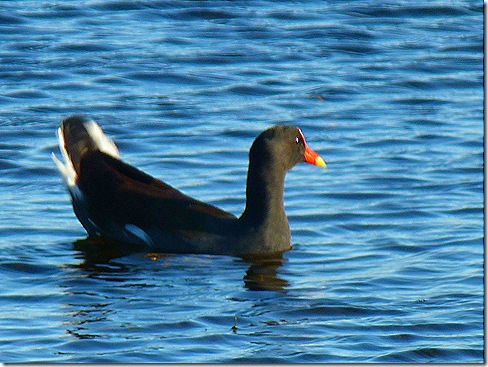 And then it happened. I had given up on spotting an alligator when suddenly Terry yelled “Stop!” and there it was, sunning itself on a grass hammock. It was only about four or five feet long, but it was a real live alligator, and it was bigger than I’d want to mess with! 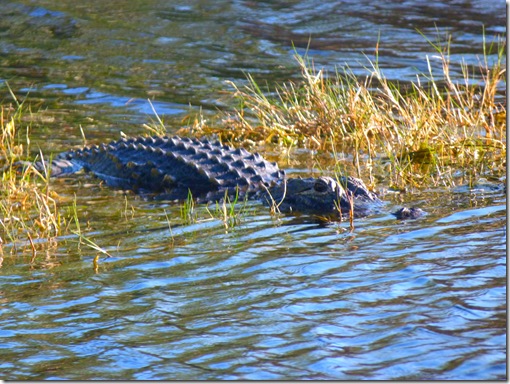 It’s always a thrill to see an alligator, but basically they are not all that exciting to watch. Mostly, they just sit there and stare back at you. So after a while, we moved on and left him to ponder what strange creatures those human beings are.

By the time we got back to the motorhome at The Great Outdoors, it was getting dark, and cold enough that we closed all of the windows and roof vents. The weatherman says a cold front is coming through, and it’s going to be windy, with rain showers the next few days. Yes, Nick is definitely back in Florida! 🙁

Thought For The Day – For men who think a woman’s place is in the kitchen, just remember, that’s where the knives are kept!