Nick's Blog » We Get A Guided Tour

Usually when we’re playing tourist in a new area, either Greg or I do the driving, but yesterday we got to just sit back and enjoy the ride! Amy Smith, owner of  Smith’s Campground & Cabins, packed the four of us into her van about 11 a.m. and took us on a day long tour of the beautiful countryside of Holmes County, Ohio, introducing us to places that most visitors never know about.

The leaves are turning, and the rolling hillsides and valleys were spectacular as we cruised along the back roads, past neat farm fields, tidy Amish farms, and beautiful old homes in the small towns we passed through. 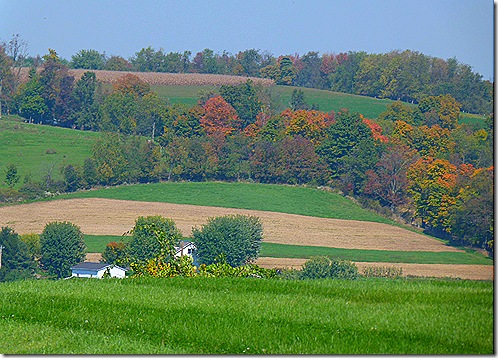 Our first stop was at Country Furniture, an Amish furniture shop, where the ladies talked Greg and I into crawling up in a huge rocking chair for a picture. I don’t know, I’m beginning to think that Greg and I may be spending too much time together. How about you? 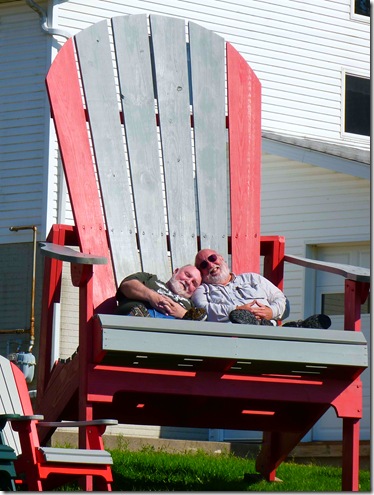 Our next stop was a neat covered bridge that spans the Mohican River along the Mohican Valley Trail, a 4.5 mile long hiking and biking trail that is popular with locals and visitors alike. The 370 foot long bridge is the longest covered bridge in Ohio that is not open to motor vehicles. 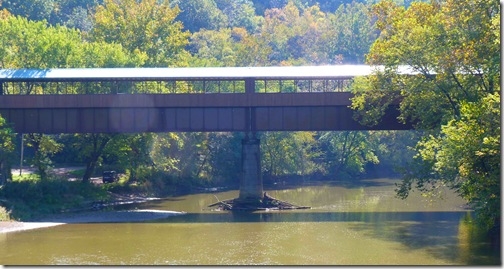 But it is used all of the time by the local Amish in their buggies, and one came through while we were there, the horse’s shod hooves echoing through the bridge as it clip clopped rapidly past.  You can just see it in the distance at the far end of the bridge as it approached. 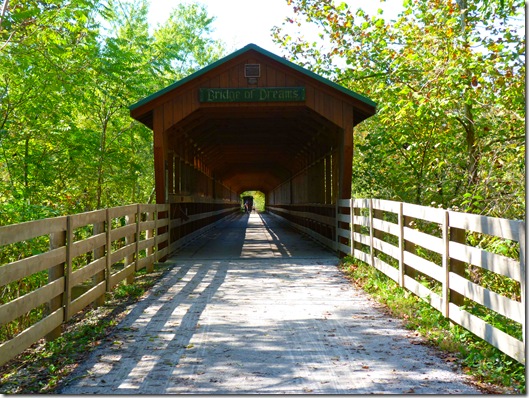 And then it was past us and rolling away. 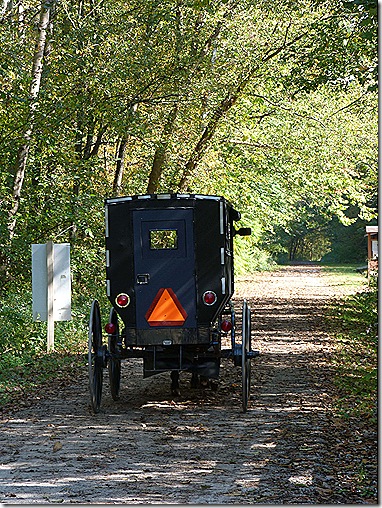 A few minutes later, the buggy passed on the road below us as it made its way down the hill. 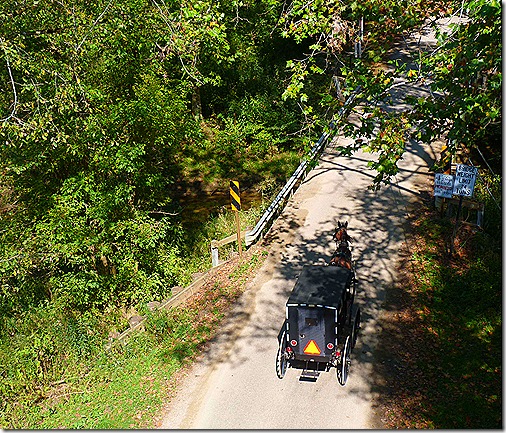 There was even a bathroom shaped like a covered bridge at the parking area near the bridge! 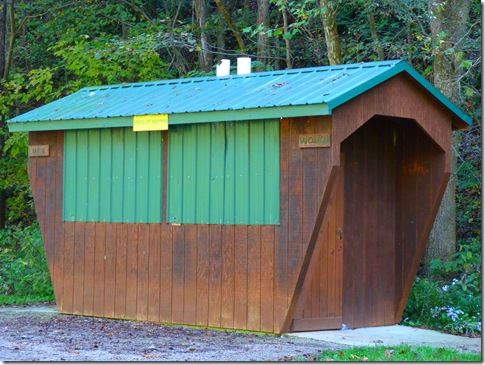 We were treated to a new view around every curve in the road. Sometimes it was a tree in all of its autumn glory. 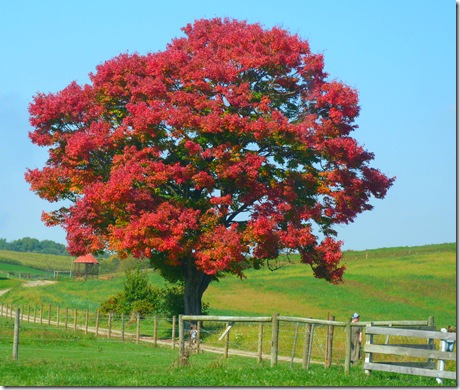 Other times it was a field of corn shucks, or an old barn with a Mail Pouch Tobacco sign painted on the side. When I was a kid, these were a common sight, but we don’t see them very often anymore. 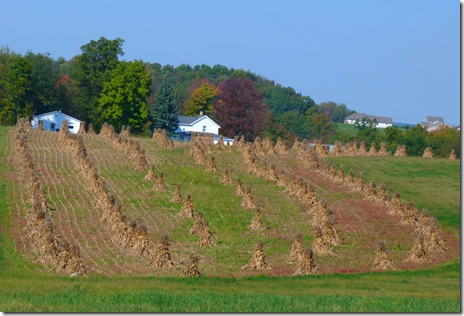 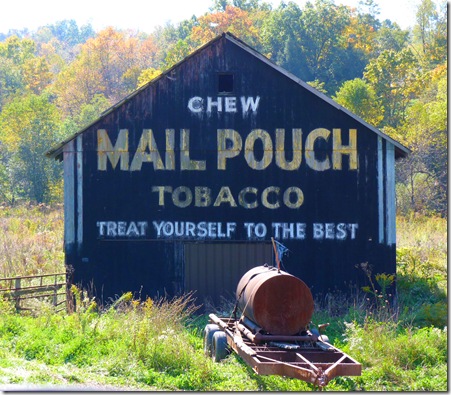 Holmes County, Ohio and the surrounding area, is home to the world’s largest Amish community, even larger than Lancaster County, Pennsylvania, and as we passed, farmers were working their fields with horse drawn plows and equipment. 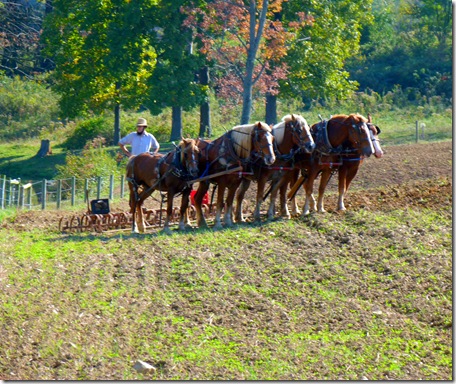 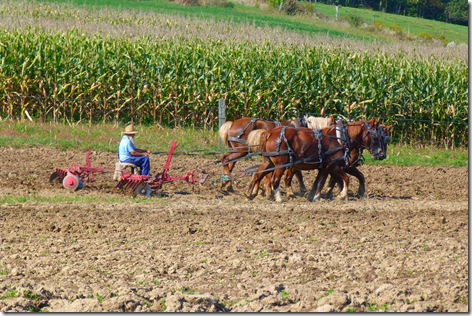 We stopped at several neat shops, including Hershberger’s, which included a farm store, farm market, and petting zoo. 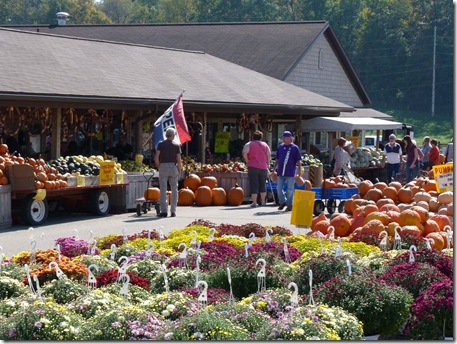 They even had goats standing on the roof of the open air barn! 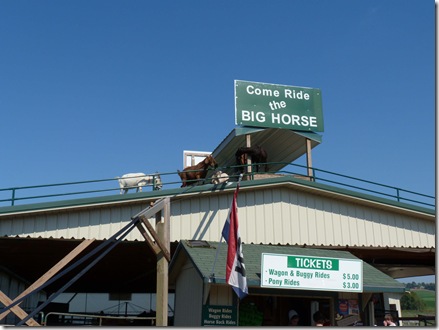 This big fellow was in no mood to be petted. His name is Big Ben, and he is a Belgian horse. At 3,000 pounds, and over 19 hands high, he is the biggest horse in Holmes County. He’s certainly the biggest horse I’ve ever seen! While he would eat ice cream cones filled with feed pellets from your hand (okay, he didn’t exactly eat them, he inhaled them!), he did not want to be touched. Every time somebody reached up a hand that didn’t have food in it, he jerked his head away, and kicked at his pipe corral. I fed him a couple of cones, and then went off to find something friendlier, and smaller, to play with! 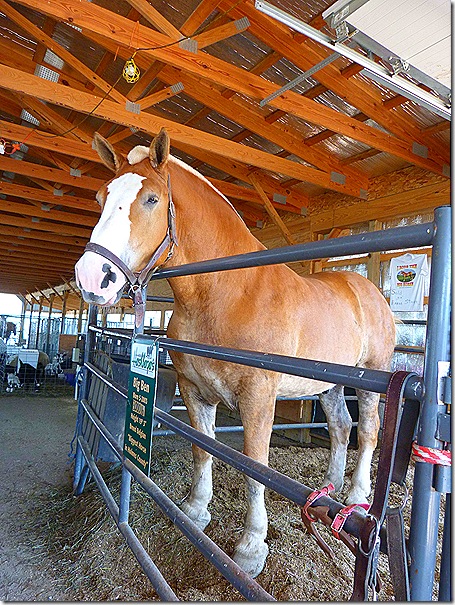 Who can pass up chocolate? After all, it is the fifth major food group, right? So when Amy asked if we wanted to stop at the Coblentz Chocolate Company in Walnut Creek, there was a chorus of approval from the back of the van! I think I gained two pounds just walking in the door! We watched the Amish girls packing chocolate in the factory, and then bought a few goodies to take home. 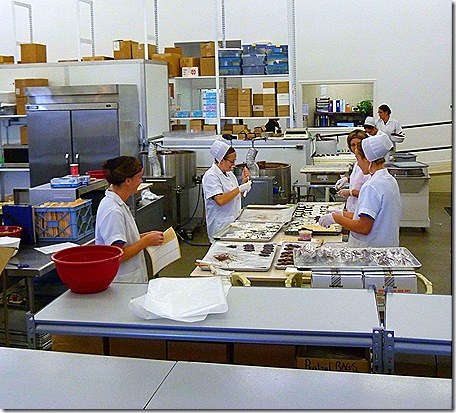 Guess what’s almost as delicious as chocolate? Cheese! So our next stop was at Heini’s Cheese, in Berlin, where they had dozens of different cheeses available to sample, and to purchase. You can bet that our credit card took another hit there! 🙂

Our last stop of the day was Spearman’s Restaurant in Millwood, a local favorite housed in a Marathon gas station. Yes, you can eat at Spearman’s, and get gas too! Actually, our meal was delicious, and though I didn’t have any room left for dessert after my dinner (and all of those chocolate and cheese samples), I wish I would have, because the strawberry pie servings were huge and looked delicious!

We got back to the campground around 8 p.m., worn out from our long day of playing tourist in north central Ohio. This is one of the prettiest regions we have ever visited, and I’m sorry it took us so long to discover it. Now that we have, you can bet that we’ll be back! Thanks again, Amy, for being such an excellent tour guide!

Thought For The Day – Did you ever notice that people who spend money on beer, cigarettes and lottery tickets, are always complaining about being broke and not feeling well?

11 Responses to “We Get A Guided Tour”