I had an epiphany yesterday, which was pretty cool, because I don’t think I’ve ever had one of those before. Oh hell, let’s be honest, up until a week ago, I thought an epiphany was one of those hybrid foreign cars. :)  And they call me the wordsmith?

Anyway, back to my epiphany. Yesterday I realized that the people who run telephone companies like AT&T, Verizon, and such must have gone to the same business schools that the folks who run the RV industry did. Think about it. In both, they make all kinds of claims about how great their newest product is, and when you get it, the darned thing is a piece of junk. Then it’s your job to nag and cajole them into fixing the problem(s), or else figuring out how to live with it.

A good example is the Verizon MiFi I got last week. As I wrote in yesterday’s blog, the day I got it, speeds were incredible, but the next day it locked onto the much slower 3G signal, and would not automatically switch back to 4G like it is supposed to. And on 3G, it was actually slower than my Verizon air card! The folks at Verizon had all kinds of excuses, from that they are still expanding the system, to that I needed to download a firmware update, to “Ahh gee, I have no idea…”

Fortunately, I have great resources among you blog readers, and Wayne Paul left a comment on yesterday’s blog telling me how to manually switch the MiFi back to 4G. I followed his directions, and it worked! I guess I will have to manually switch it back to 3G when we’re not in a 4G area, but at least it works. Thanks Wayne!

Greg and Jan are leaving us today, to begin their winter trip back to Houston to spend the holidays with family, so we spent yesterday afternoon exploring the back roads of Amish country with them. A lot of leaves have already fallen, but the colors are still very vivid in some areas. The farmers were busy harvesting their crops, and at one place we stopped to watch an Amish farmer harvesting his corn with a four horse team. 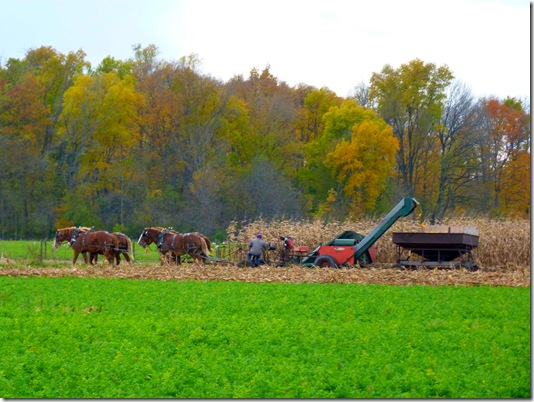 In Shipshewana, we stopped at a store that had some neat looking baskets out front, and these Adirondack style lawn chairs in the back. They looked cool at first glance, but as we got closer, Miss Terry pointed out that they were all plastic, baskets and chairs alike. So much for fine Amish craftsmanship! 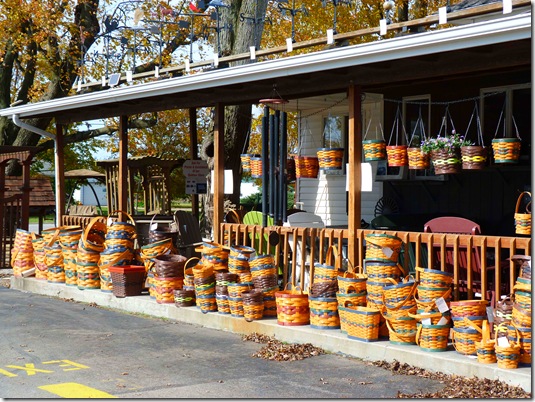 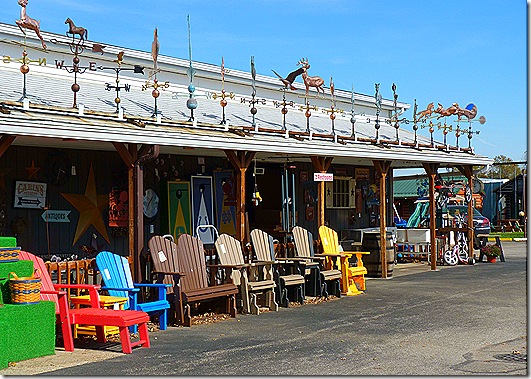 We also stopped at E&S Sales, a bulk grocery store that is a popular with Amish and visitors alike. Miss Terry got some flour and other items she was looking for, but all of that shopping made me tired, so I crawled into this oversize hammock to take a nap. Getting in was a chore, but getting out was downright funny. At least Greg, Jan, and Terry thought it was funny! There is a rumor that they took a video of me thrashing around trying to escape the darned hammock, but threats of exposing some of their faux pas will hopefully keep it undercover. As my old man always used to tell me, knowing where the bodies are buried can come in very handy someday! 🙂 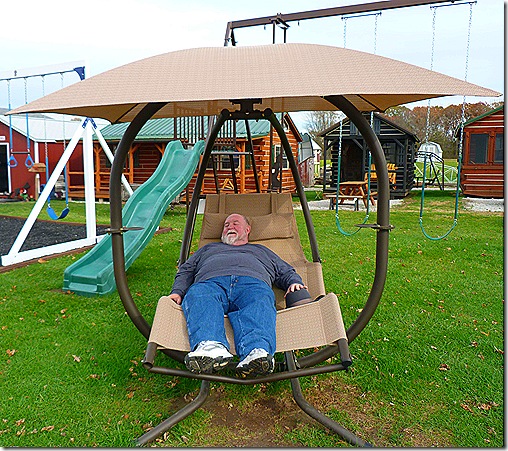 We spent an hour or so at the Shipshewana Flea Market, but since it was late in the day and late in the season, there weren’t many vendors still set up. But Terry did get some apples, and Greg picked up a gizmo or two.

We spent another hour or two poking around the back roads and admiring the Amish farms, then stopped at El Maguey for Jan’s birthday dinner. Our friends Dave and Jean Damon, Jeanne Sparks and Eldon Tompkins, and Al Hesselbart met us there, and we had a great time eating and talking about the past summer’s travels, and the adventures that await us this winter.

Back at Elkhart Campground, we had another treat waiting for us. Jan loves pumpkin pie, so Terry had bought a pumpkin and made two pies from scratch. Man, were they delicious! That lady is a wizard in the kitchen! 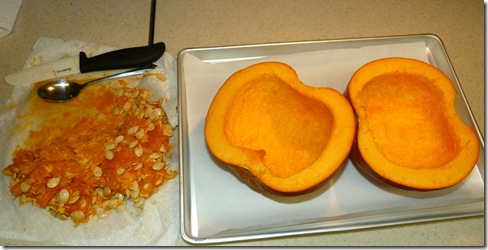 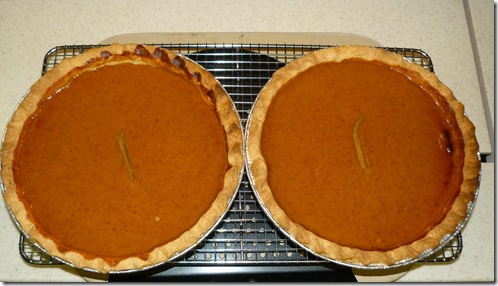 Today we hope to get the last of the new issue in the mail, and then get ready to hit the road Thursday. It will be good to scratch our hitch itch!

Thought For The Day – In the end, we only regret the chances we didn’t take, the relationships we were afraid to have, and the decisions we waited too long to make.

13 Responses to “MiFi And Pumpkin Pie”