Nick's Blog » I Was Right, It Sucked!

I wrote in yesterday’s blog that Friday was going to suck, and I was right! I mean, how can a day not suck, when you crawl out of a nice warm bed at 6 a.m. and are greeted by heavy frost? And it went downhill from there!

After whining and sniveling for a while, and getting no sympathy, I went outside and unplugged our water and electric connections. Is there anything harder to deal with than pulling a heavy 50 amp motorhome power cord that is cold and stiff through the access hole in the floor of a bay? Yes there is; that would be dealing with a cold stiff water hose, while the struts on the water bay door won’t hold it up, so you get whacked on the bald head not once, but twice! Ouch!

With everything unhooked, we pulled in the slide room and raised the leveling jacks, and then drove over to the fairground’s dump station. I knew this was going to be ugly, and I was right. It was still dark, so Terry positioned the Explorer so the headlights would give me some illumination, and I pulled the cap on the Winnebago’s dump connection. I won’t go into any further details, except to remind you that the reason we were in Celina was to get the black water valve replaced, because it wasn’t holding anything back. By the time I had dumped and cleaned up the mess, it was 7:45. and I had already had a miserable day.

We got to Cruising America RV Service right at 8, and owner Kevin Mallory greeted us. How can a guy be that cheerful that early in the morning? Kevin got us pulled into a bay in just a few minutes, and while he and Bob, the RV tech, scoped out the job ahead, Miss Terry drove a couple of blocks to Grand Lake to watch the sunrise, and take some photos. She got some great shots, don’t you think? 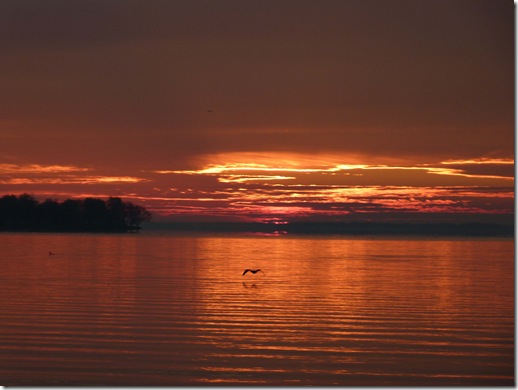 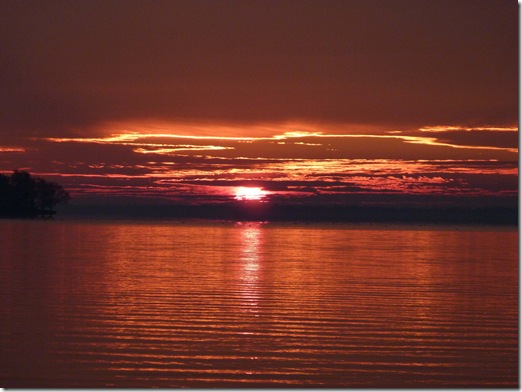 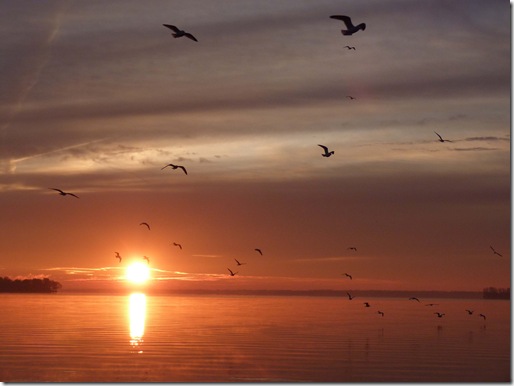 These remind me of the old Alfred Hitchcock movie The Birds. 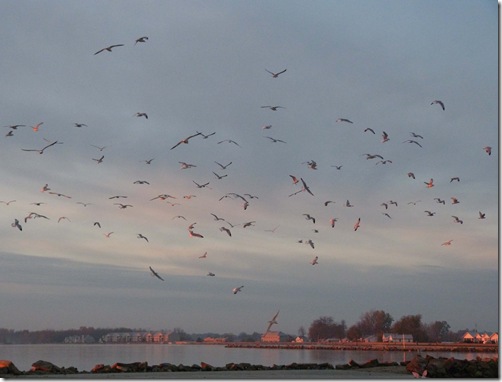 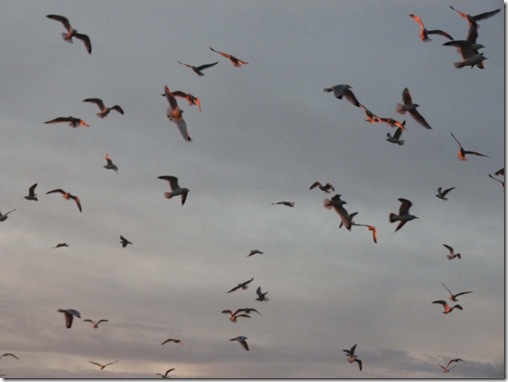 At 17,500 acres, Grand Lake is the largest man-made reservoir in the world, dug without machines, between 1837 and 1845 as a feeder for the Miami-Erie Canal system. 17,000 men used picks, shovels, and mules in the huge excavation project, working from sunrise to sunset for thirty cents a day and a jigger of whiskery. The booze wasn’t to drown their troubles, it was believed to ward off malaria. The lake even has its own lighthouse! 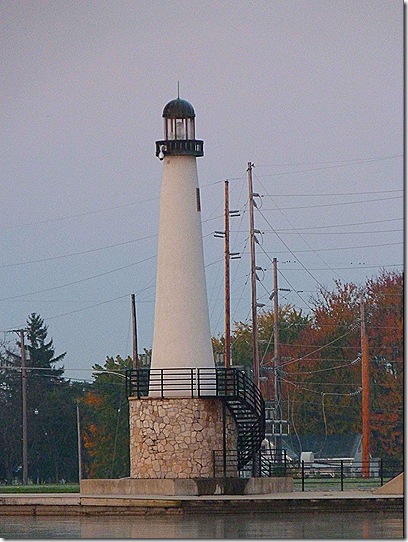 While we were at Cruising America, we got some LED lights to replace the halogen lights under our living room cabinets, and also for the light fixture over the table. They use almost no electricity, don’t get hot like halogen bulbs do, and give a much brighter light.

The sewer valve was replaced, and we left Celina about 11:30, driving 50 miles south on U.S. Highway 127, a nice two lane road for most of its length, with a couple of divided four lane sections along the way, and very little traffic. Eventually we got onto Interstate 70, where traffic immediately picked up, and took it east 28 miles to Interstate 75, just north of Dayton.

I-75 is never an easy highway to drive in this part of the country; there is always lots of road construction, it bounces you all over the place, and traffic is always hectic. But we managed to thread our way through all of it, and cruised through Dayton and Cincinnati, and crossed the Ohio River into Kentucky. It had been overcast all day long, and somewhere north of Lexington, it started to rain, and the further south we drove, the harder it began to come down.

Terry did manage to get a few good pictures of fall foliage between rain bursts. 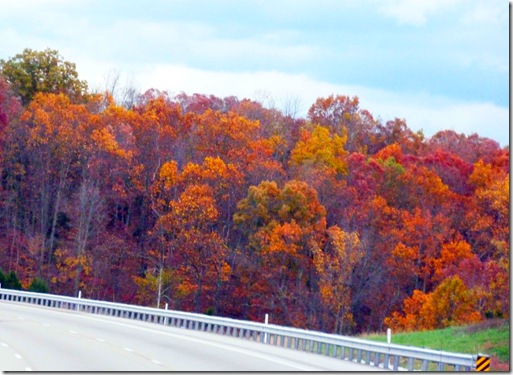 We had hoped to make it to the Escapees Raccoon Valley campground, just north of Knoxville, but we realized we would not make it before dark. We don’t like to drive after dark, and between the early morning wakeup, the rain, and the lateness of the day, we went to Plan B. (Always have a Plan B!) About 5 p.m. we stopped at Walnut Meadow, a nice family owned campground just a half mile off the highway in Berea, where $20 got us a pull through RV site on gravel, with 50 amp electric and water. I didn’t even unhook the Explorer from the tow bar, I just hooked up water and electric and called it a day. We had covered 258 miles, and that was more than enough for me.

The game plan was to stop in Maggie Valley, North Carolina today, at the Wheels Through Time Museum, but we are looking carefully at the weather. By the time we get there, and then tour the museum, it will be very late in the day, and it was 27 degrees, with snow there overnight. A blog reader who is workamping at Maggie Valley e-mailed me to say that they had a lot of black ice on Interstate 40 and on U.S. Highway 19 between the interstate and Maggie Valley in the last few days. Before we pull out today, we’ll do some checking to see what we’re getting ourselves into. We may have to go to Plan B again. (Did I mention that you should always have a Plan B?)

Thought For The Day -  If you’re not willing to risk it all, then you don’t want it bad enough.