Well, it only took ten months, but yesterday Miss Terry finally got to try out the Sea Eagle 385 Fast Track kayak I bought her for Christmas last year. We have wanted to get on the water before now, but right after the boat arrived the weather turned cold in Florida, and it stayed cold the rest of the time we were there. Since then we have never had good weather and time to go paddling at the same time. Either it was cold and nasty, or else it was perfect paddling weather, but we were busy with the paper or a rally. But yesterday the big day finally arrived.

The Mohican River flows right beside Smith’s Campground & Cabins, and there are kayak and canoe liveries strung out all along the river. We drove abut four miles upriver to a launch point, and proceeded to inflate our kayaks. The Sea Eagles each come in a  vinyl envelope, and when folded up, both fit easily into the back of our Ford Explorer, even with a full load of newspapers. 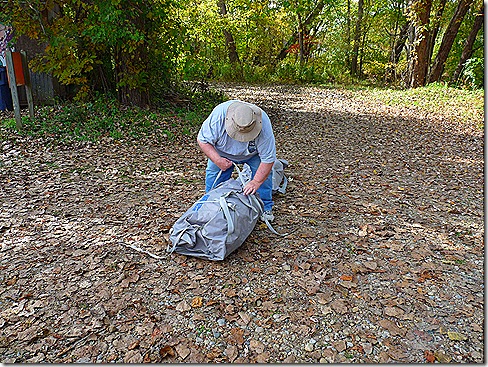 The first step was unrolling Terry’s kayak. My Sea Eagle PaddleSki 435  is still rolled up in the package behind me in this picture. 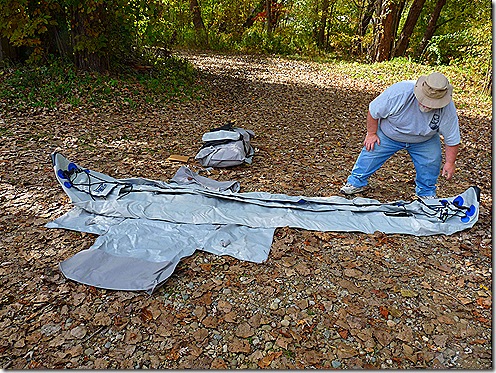 Each Sea Eagle comes with a foot pump, and I can easily inflate my PaddleSki and be in the water in about seven minutes. But last year I also had Tim and Crystal Ryerson at Inflatable Boats 4 Less send me one of their electric pumps, which makes short work of inflating a boat. 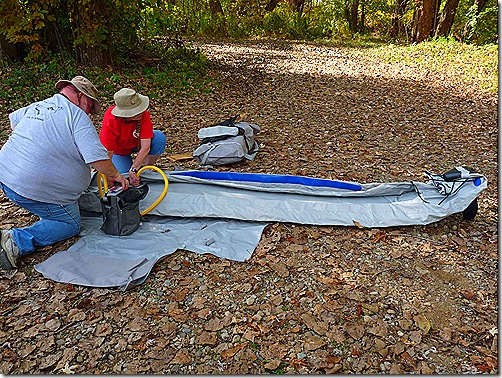 Well, it does if you know what you are doing. But since we had never inflated Terry’s boat before, and because it has air valves in the floor also, as well as a skeg that you are supposed to attach to the bottom of the boat before you inflate it, we did it all bassackwards the first time around. As my buddy Greg White always says, RTFM (Read The Freaking Manual). But hey, I’m a guy. We never read the instructions first, right? 🙂 So we deflated the boat, attached the skeg, and then aired it up again. Terry put her inflatable foot rest and seat in, and she was ready to go.

Greg and Jan had ridden down with us, and drove our Explorer back to the campground. Greg took a picture of us just after we launched, as we were paddling out into the river. 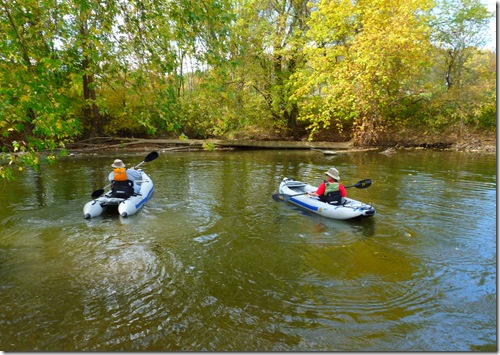 It was a perfect day for paddling, not too hot or cold, no wind, and the scenery was spectacular. 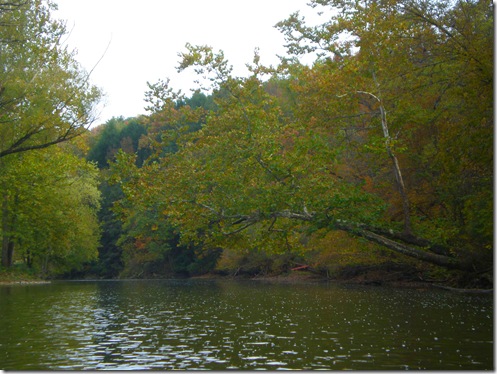 We passed several canoe liveries, and met a few other paddlers along the way as we followed the river on its winding course. 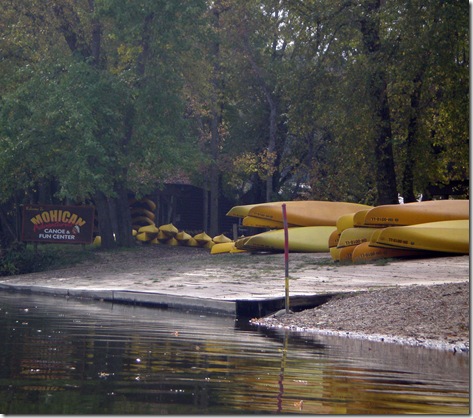 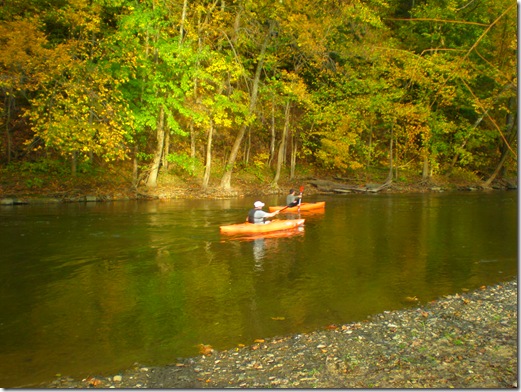 There was a nice current to carry us along, and several places where the water was shallow, causing some fun mini-rapids. The Sea Eagles rode through just fine, even though a couple of times I was bouncing off the shallow bottom. Here is Terry’s view as we paddled along. 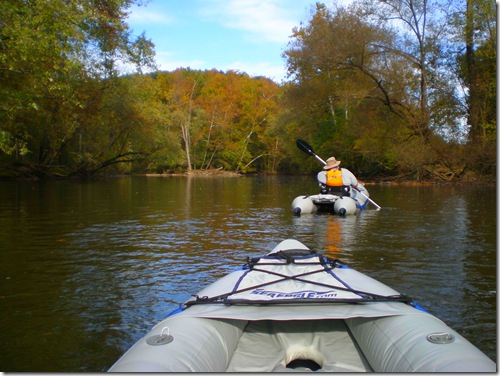 My wife loves her hard shell Native Watercraft kayak, and at first she was hesitant to switch to an inflatable. So I was apprehensive as to what her reaction to the new boat would be once she finally got it out on the water. But she says its the best thing since sliced bread. The ride was comfortable, even in the river’s current it handled well, and the boat is extremely responsive. Terry said it was almost like being a fish – she could move through the water easily and the boat does the swimming for her! Yes, she is another happy Sea Eagle owner. 🙂 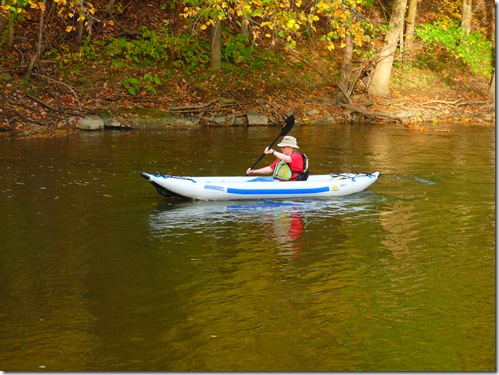 Unfortunately, my ride wasn’t nearly as pleasant. I have a very bad back, and somehow we got my seat set up wrong before we got into the water. About 30 minutes into our two hour trip, my back started to ache, and soon I was in agony. So I whined and sniveled all the way downriver, and by the time we got to the campground and got our boats pulled up on the bank, with Greg’s help, I was really miserable. 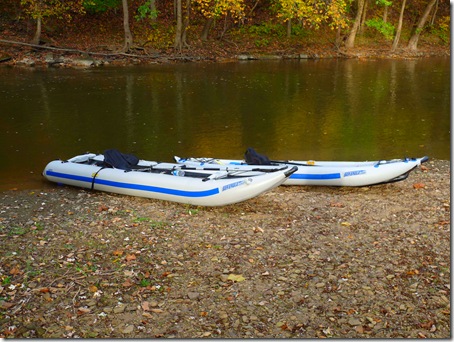 Fortunately, Amy Smith, our hostess here at the campground, is a massage therapist, and between her ministrations and a heavy duty pain pill from my stash, compliments of the VA hospital, I was able to knock down the pain down to a tolerable level. This has nothing to do with the Sea Eagle, or even the seats. It’s a problem I have lived with for years. Last winter we figured out a way to set up the seat that was very comfortable for me, even after two or three hours on the water. But somehow, we managed to forget how we did it since then, so we’ll have to do some experimenting and get it right. I love paddling my boat too much to give it up! 🙂

After we had changed clothes and I was a little more mobile, we set off with Greg and Jan, George and Amy Smith, their daughter Kim and son-in-law Scott, and granddaughters Madison and Marissa, to a place called The Hangout, in the little hamlet of Danville. The service was friendly, even if it was a little slow, and the food was great. I had barbecue wings, and Miss Terry had a mushroom steak sandwich, both of which were delicious. The chance to sit and visit with our new friends made it even better.

We’ve only been here a few days, but we already feel like we are part of the family. The Smiths are some of the nicest folks we’ve ever met, and if winter wasn’t coming, I’d be perfectly happy to stay here another month or two. It just feels like home. You really, really need to put this campground on your Must Visit list! You’ll thank me once you do.

Speaking of good friends, our pals John and Jean Watson were in an accident in Virginia a couple of days ago, and it looks like their motorhome is totaled. Fortunately, they and their dog are okay, but once they get done dealing with the insurance company, they will need a replacement RV. Jean said they are looking for a Tiffin diesel pusher, a Phaeton or Tiffin Bus, so if you know of a good used one available, please contact her at Jeanw7927@gmail.com. 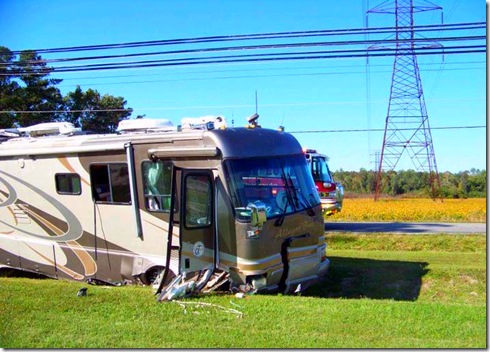 Our time here at Smith’s Campground & Cabins is about up, and we’ll be (reluctantly) hitting the road soon. But in the meantime, we still have some exploring to do today. Tune in tomorrow to see what we came up with!

Thought For The Day – If a cow laughed, would milk come out of her nose?