After reading everybody’s positive comments about Mac computers, you all convinced me that it was time to take the plunge. So yesterday we took ourselves off to the Apple store at University Park Mall in Mishawaka to go computer shopping. I had already done a lot of research, and decided that the iMac was the right machine for me. It was just a matter of pulling my credit card out of my wallet, wiping the dust off of it, and cringing as they rang up the sale.

But then I got to thinking (which is never a good idea). If one iMac is a good thing, two must be great, right? Ever since we started the Gypsy Journal, we have been buying computers as we needed them, when their predecessors bit the dust, and Terry and I never had computers that were compatible. I have been using a four or five year old Dell desktop running Window XP Pro, and Terry has a Toshiba Satellite laptop with Windows 7. While they were both Windows based computers, my older version of Microsoft Office was not completely compatible with her newer version, so we had to convert her recipe column to the older format when putting a new issue of the paper together, for example. There were several irritating little things like that.

So we decided, in the spirit of American consumerism, to just max out the damn credit card and buy two identical machines. And here they are! 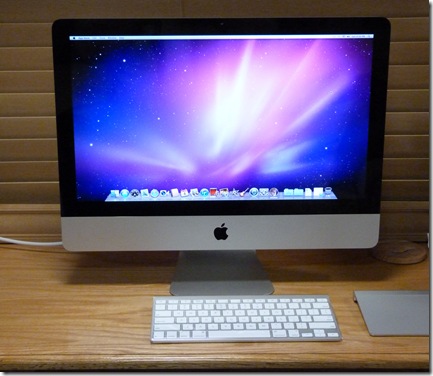 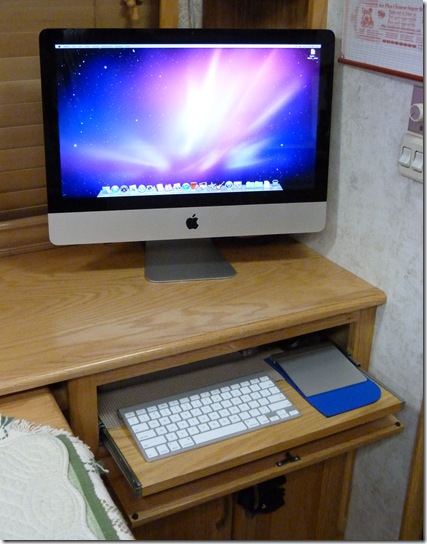 They are 21 inch iMacs, with 2.7 GHz quad-core Intel Core i5 processors, 4 GB of RAM (we’ll be upgrading these to 8 GB) and 1T hard drives. Now if we can just learn how to run the darn things! 🙂

We signed up for a program called One To One, which gives us each a year of online and in person training at Apple stores across the country. We also bought a couple of good books on the iMac and the new Lion operating system, with lots of color pictures so our foggy old brains can understand them.

For the time being, as we transition from our old Windows computers to the iMacs, I am keeping my Dell plugged in and running, too. This way, if I need to get some work done and get bogged down, I can switch back. Of course, I caught myself using the wrong keyboard more than once and wondering why nothing showed up as I typed! 🙂 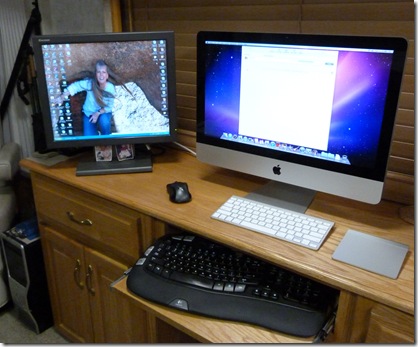 I guess the best way to explain the difference in the two type of computers, would be like comparing driving a standard shift car to one with an automatic transmission. Both will get you where you’re going, but you use different controls to get there. When we got rid of our Toyota pickup and moved to the Ford van with an automatic transmission, for weeks afterward we found ourselves reaching for the clutch pedal or gear shift occasionally. Or, to put it in terms all RVers can understand, how many times have you caught yourself trying to flush the toilet with your foot when visiting someone’s home or using a public restroom? 🙂

It took about three hours at the Apple store to purchase the computers and get a quick introduction to them from one of the young ladies there, who explained a few basic functions, and by then, it was after their 6 p.m. closing time. Greg and Jan White had ridden to the mall with us, and all this time, Jan enjoyed browsing a few shops and people watching from a bench in the mall near the store. Greg divided his time between keeping Jan company and popping back into the store to see how we were progressing, and so I could pick his brain about technical questions as they came up.

When we were finished at the Apple store, we stopped at the Barnes & Noble bookstore in the mall to buy the computer books mentioned above, and then had dinner at Five Guys, one of our favorite fast food chains in the country.

Back at Elkhart Campground, we set the computers up on our desks and spent the rest of the evening getting familiar with the basics of how they work. And I won’t lie to you, there were the occasional frustrations and maybe a threat to grab the nearest chainsaw or sledgehammer may have been uttered. It’s going to be interesting! 🙂

Thought For The Day – I have learned more from my mistakes than from my successes.